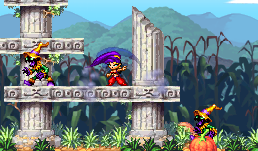 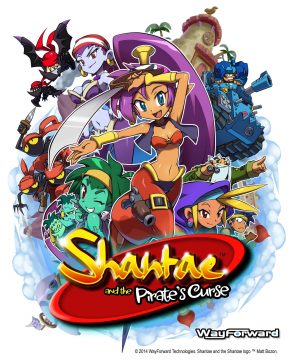 Shantae and the Pirate’s Curse finds the purple haired hero joining forces with recurring baddie Risky Boots. Why? Risky’s old compatriot, the Pirate Master, is planning something sinister, and stolen most of Risky’s equipment to boot. To make matters worse, Scuttle Town has been sold to Ammo Baron, who is taking the charming little burg and turning it into an armed fortress. And so, Shantae must set off to the seas to find all of Risky’s goods, and save her town in the process. 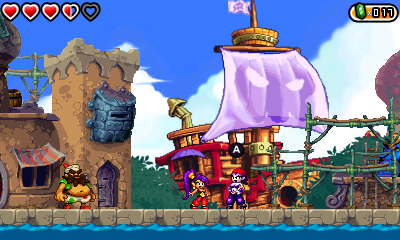 The game was initially developed for the 3DS, and ported to other platforms, including the Wii U, PlayStation 4, and Windows. Although many sprites and background titles have been reused from Risky’s Revenge, the higher, widescreen resolution of the system allows for a much larger field of view, making it feel far less cramped. Along with this, Shantae’s movement speed is now faster, and the control feels much tighter as a result. The character portraits have been drawn by the staff at Inticreates, giving them a rounder, cuter, more Japanese feel. They also emphasize the characters’ sexiness a little more, an element played up even more in later series installments. The 3DS version has some nicely subtle 3D effects; the Wii U, PS4, and PC versions have higher resolution character portraits through the rest of the visuals are identical. The 3DS and Wii U versions use the lower screen or Wii U tablet as a map and inventory screen. 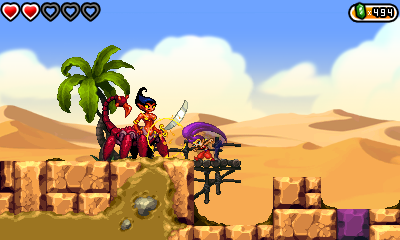 The map structure has been changed again from the previous game. The world is divided into six islands, including Sequin Land. Scuttle Town acts as a hub, where Risky can take Shantae to any of the other lands, most of which have a labyrinth hidden somewhere within. At first you can only visit the tropical Saliva Island, but after beating the boss, you obtain a map piece which lets you visit the next area. The other islands include the spooky Spiderweb Island, where you meet Rottytops and her family; Tan Line Island, a desert with a huge pyramid; Mud Bog Island, which contains the entrance to the game’s equivalent of the underworld; and Frostbite Island, which in addition to the snow mountains, also has a gigantic flying fortress named Propeller Town. As you progress, there are mandatory subquests that typically require that you revisit previously completed areas. Even though the islands aren’t connected to each other directly, outside of the hub, it still very much feels like a Metroidvania. The map screen has been changed to the same kind as seen in Super Metroid and Symphony of the Night, marking a huge improvement over Risky’s Revenge. The plane jumping areas from Risky’s Revenge are also gone. 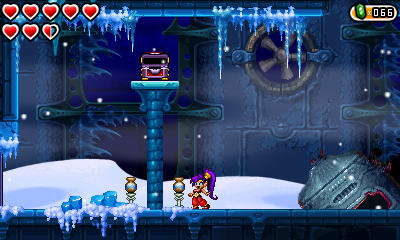 At the end of Risky’s Revenge, Shantae lost her magic powers, which makes for some changes. First off, without the magic, the special attacks have changed. Rather than being dictated by a shared meter, they’re single use items typically dropped by enemies. Secondly, and more importantly, all of the animal transformations are gone, and instead you get to use one of Risky’s artifacts. This seems like a bummer, but it actually ends up working pretty well. In the previous games, the animals felt like little more than keys to assorted locks – you’d transform into them when necessary, and then switch back to Shantae, because most of them couldn’t attack. Here, Risky’s equipment has a lot more general uses and is more integrated into the action. The sword can be used to destroy blocks but can also be used as a pogo stick to bounce on enemy’s heads a la Duck Tales; the dash maneuver lets you quickly speed through the environments, which is very helpful when backtracking considering that there aren’t any more Warp Squids; and the cannon grants you the ability to not double, not triple, but quadruple jumps, which ends up being a lot of fun. 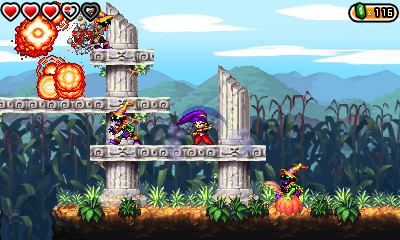 The magic jams are gone, and you can buy whatever you want as long as you have the cash. Instead, as far as collectibles, the heart containers work like the later Zelda games, where you need to find four of them to extend your life meter. Additionally, there are also twenty Tinkerbats, corrupted by dark magic, hidden throughout. They don’t give you much directly, but if you want a good ending you’d better track them down. 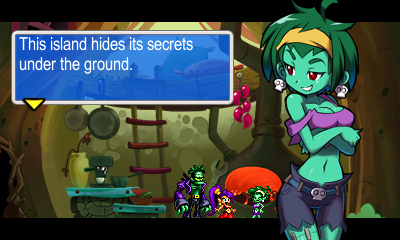 The quality of the writing is even better than the past games. The characters always had a semblance of goofiness about them, but their dialogue is livelier, and funnier. There’s also a wider cast of supporting characters, mostly associated with absurd subquests. For example, in Saliva Island, you need to shine sunlight onto a set of ruins in order to unlock something. There are two girls, Twitch and Vinegar, who are visiting on vacation and are grumbling at the lack of water. After you manage to create a pool for them (created by capturing the smell of their roasting ham and giving it to drooling dragon), they change into swimsuits and apply sun tan lotion, providing the necessary reflection for the sun rays to reflect of off. From a pure puzzle solving standpoint, these subquests rarely really make a whole lot of sense, but their requirements are usually easy telegraphed, so their ridiculous solutions often act as their own reward. 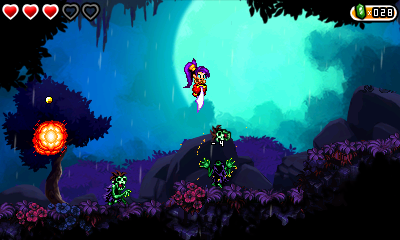 The music is once again supplied by Jake Kaufman, remixing some tunes from previous games while supplying a whole slew of new songs. The sound quality is improved over Risky’s Revenge, and most of the compositions are better too, with more than a few tracks that would sound perfectly at home in a Castlevania game.

The first two Shantae games were decent in their own respects, but ended up being compromised in a variety of ways, either due to the hardware or development constraints. Shantae and the Pirate’s Curse is where the series finally nails pretty much everything – the action is tighter, the story is better, the world is well developed, and the levels are better constructed. It easily stands up next to the portable Castlevania games, filling the gap for exploratory platformers while providing something fresher than Konami’s aging series. 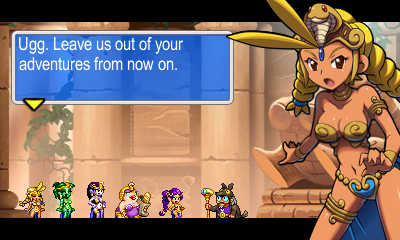 Shantae and the Pirate’s Curse was initially a digital-only release, with the first physical version being a Japanese 3DS release published by Integrow. In North America, a physical 3DS version was published by Rising Star Games, which includes an extra minigame called “Shantae Super Nab” where you control the monkey form and grab gems. The PlayStation 4 and Switch versions were also released by Limited Run Games.