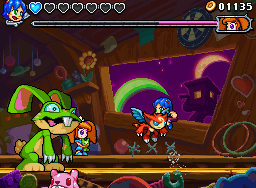 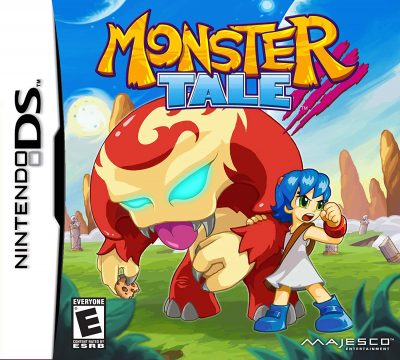 It should come as no surprise that the developers behind Henry Hatsworth and the Puzzling Adventure – a quirky, whimsical Nintendo DS title that takes the term “puzzle platformer” quite literally – were a bit too good to roost forever at Electronic Arts. Peter Ong and Ryan Pijai, Henry Hatsworth’s director and programmer respectively, broke away from EA Tiburon and founded their own game development studio, DreamRift, in 2009. 2011’s Monster Tale was their freshman effort: a quirky, whimsical Nintendo DS title that once again uses the DS’s dual screens to blend genres together, this time in Metroidvania/virtual pet flavor.

Monster Tale is a tale about monsters, but it’s also about Ellie, a young girl who is woken up one night by a strange sound coming from the local woods. Her investigations lead her to discover a mysterious glowing bracelet, and she’s quickly whisked away to a world ruled by monsters. Or at least, it used to be; five other children have come to this world before her, and they’ve abused the monsters’ belief in things like “prophesied child heroes from another world” to become tyrannical kings. These other children see Ellie as a threat to their rule and want her gone, but she has a newfound protector in Chomp: a tiny monster who bonds with her mere moments after his hatching. In order to find her way back home (and find Chomp’s real mother), Ellie will have to dispose of the five despotic Kid Kings and restore the Monster World to its rightful state. It’s a simple story, but a reasonably effective one, thanks to the way it gently deconstructs a number of tropes associated with kid heroes whisked in from other worlds and their monster companions. 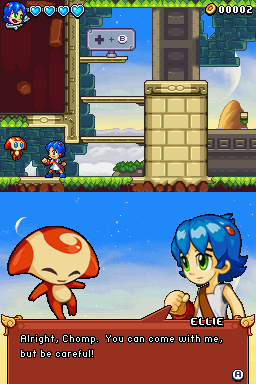 As a Metroidvania, this is a game about exploring an open, interconnected 2D world and gaining new abilities that allow the player to visit more of it. Though the game leans heavier on the “Vania” side of its chosen genre than it does on the “Metroid” one; the game is actually reasonably light on sidepaths and hidden secrets. The few bonus rooms tend to contain consumable items or currency, and most of your optional upgrades come from an impish shopkeeper named Jinx. The platforming is fairly simple and most of your necessary powerups improve your combat capabilities in some way, meaning most of the gameplay emphasis lies in fighting your way from room to room. Like its spiritual predecessor Henry Hatsworth, this is a game with surprisingly intricate (and also surprisingly difficult) combat, where bad guys are aggressive and stunlocking and juggling enemies is heavily rewarded. But it is careful never to overwhelm the player and exploration never becomes too onerous. Instead, it provides just enough tooth to let both of the game’s protagonists shine.

Plucky young Ellie is the character directly controlled by the player, and she’ll feel immediately familiar to those who have played Henry Hatsworth. The two games’ controls are near identical and the protagonists share a large percentage of their movesets. (Indeed, one cutscene slyly implies that Ellie is Henry’s niece without mentioning the still-owned-by-EA character by name.) Ellie can jump, fire projectiles from her magic bracelet, and perform melee attacks with her tote bag. As the player progresses, she gains new abilities such as a ground pound, a rolling somersault, and even a wall jump lifted straight from Henry Hatsworth. She also slowly learns how to combo the living daylights out of foes, making her a formidable force even without her monster pal. 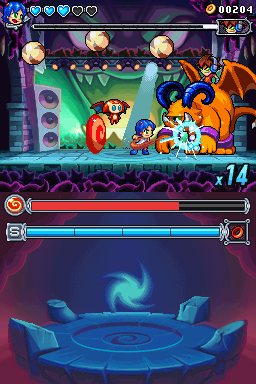 In contrast, Chomp is more of an RPG character. He has a numerical stat spread that increases as he fights monsters and gains experience points, and most of his abilities are gained through leveling up. Most of the time, he hangs out on the “Pet Sanctuary” on the bottom screen, puttering around while Ellie platforms up top. Ellie can find items while exploring, such as food, toys, or books, that Chomp can use to gain stats and EXP. Some items also have additional effects that can assist Ellie, such as a catapult that launches cannonballs at enemies on the top screen and present boxes that generate health or gems. Some overworld puzzles and enemies also send things into the Pet Sanctuary, like switches and minions, that Chomp will have to deal with before Ellie can proceed. The intent of these lower-screen shenanigans is that Chomp feels like a virtual pet, but due to his lack of “needs” mechanics (such as hunger or boredom), the game never really achieves this. It does, however, still make for some cute puzzles, gives the game unique strategies based on its item usage, and adds a touch of resource management.

At any time, the player can summon Chomp out of the Pet Sanctuary to fight alongside them. He’ll automatically hover around the screen for as long as his stamina meter lasts, periodically striking enemies, but the player can also instruct him to use special abilities. And it’s these abilities that truly make the game feel like something special. Chomp learns a grand total of 31 distinct abilities, running the gamut from physical attacks to defensive barriers to healing skills to just giving Ellie an extra air jump. This gives the game a tremendous amount of variety. These abilities are unlocked by evolving Chomp: depending the items Chomp uses, he’ll grow into new forms, each with its own trademark skill and unique stat spread. Initially abilities are locked to the forms that learn them, but as Chomp levels up, he’ll master these skills and be able to use them with other evolutions. And Chomp can switch forms at any time, giving the player the freedom to play around with whatever forms they wish. 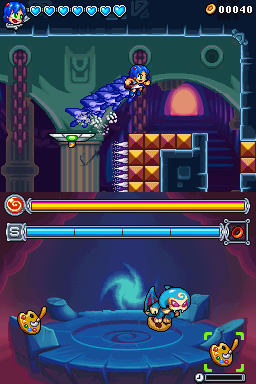 Together, Ellie and Chomp make for a compelling duo, and using their combined skills to tackle the game’s challenges is immensely satisfying. The bosses are legitimately quite difficult and require mastery over both characters, often attacking the player from both screens, making them a true test of the player’s skill (and an effective use of the DS’s main gimmick). And there’s a wonderful sense of discovery in trying to unlock each of Chomp’s new forms and seeing what they do. The game is very nearly a crown jewel of Metroidvanias, a shining example of the genre at its best. Unfortunately, it has one major flaw that keeps it from being at the top of the heap: its backtracking.

Backtracking is expected in Metroidvanias. Desired, even. Monster Tale, however, takes this aspect of its genre and does it to death. Whenever you get a new ability, the place you need to use it is almost always in a wildly distant part of the map, and you’ll have to slog halfway across the world, only to find another new ability, only to discover that you need to use that new ability in the place you came from in the first place. It’s more manageable in the early stages of the game when the available gameworld is smaller, but as more of the world opens up, be prepared to do a lot of hiking. The game always tells you the exact place you need to go next, which is both a blessing and a curse; you won’t have to wander to make progress, but for those who enjoy open-ended exploration, it feels much too straightforward. The longer the game goes on for, the less organic it feels, and it sorely could have used shortcuts or warp points to ease its navigation.

But even with that flaw, Monster Tale is ultimately a charmer. It manages to finish strong, with its final area being a massive, self-contained labyrinth that takes players on a grand tour of the game without ever making them backtrack. And it’s hard to stay mad at a game that is, to put it bluntly, as utterly adorable as this one – everything in this game is cute. Chomp’s big blue eyes and spiral-patterned forehead are charming enough on their own, but the game also features some truly lovely spritework in its enemies and backgrounds as well. Everything moves fluidly and the level archetypes are extremely creative, from the thumping underground dance club to the neon-colored oceanic base to the treehouse made entirely of puzzle pieces. Even the soundtrack is bouncy and fun. 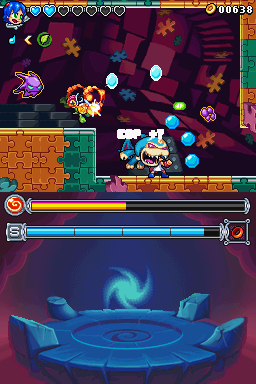 The game did understandably well with critics and garnered a cult following, though it was never a huge hit; it released too late in the Nintendo DS’s life and only in North America. But while the game’s story is nicely self-contained, in real life, this Monster Tale ends on a cliffhanger. In March of 2015, DreamRift announced that they were working on an updated rerelease of the game for the Nintendo 3DS, entitled Monster Tale Ultimate. The remake’s ambitious plans included rebalanced gameplay, new areas, and overworld shortcuts. As of this writing in January 2019, however, the remake has yet to materialize.

Even without the touchups such a remake might afford, however, Monster Tale remains a worthwhile experience. It’s a little less bizarre than its uncle Henry, a little more grounded, and thoroughly pleasing as a combat-oriented 2D platformer. It’s also the kind of game that feels like it couldn’t have happened on any system other than the Nintendo DS. It may not be a perfect tale, but it’s still one well worth hearing.