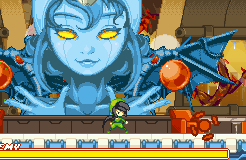 While the original Noitu Love was a pretty impressive piece of work, all things considered, its sequel is clearly where Sandberg’s heart and soul really went. Devolution goes so far and beyond its predecessor that it outclasses it in just about every way. This time around, the game’s inspiration clearly comes from Treasure’s best work, with its unique controls and emphasis on crazy bosses, and makes for a pretty fine tribute. 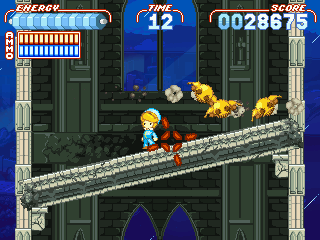 It’s been a hundred years since the previous game, and both Noitu Love and Darnacus Damnation have faded into history. One day, however, the army of Darns attack the city once more, although who’s controlling them remains a mystery. What’s more, parts of the city are apparently changing into places of the past, forcing new Peacekeepers League member Xoda Rap to investigate. Unlike the first game’s simple if inoffensive plot, this one piles on so many twists that it eventually gets impossible to tell what’s going on at all. If Sandberg was trying to pay homage to Treasure’s typically confusing plotlines, he did an excellent job, but otherwise, the story in this particular game is best left skipped.

Xoda has a much more extensive moveset to emphasize the game’s new focus on action. In a rarity for this subgenre, the game’s controlled entirely with the keyboard and mouse on PC, which opens up some interesting mechanics. The mouse controls a cursor on screen, and by left clicking an enemy or object, Xoda will fly towards it. Repeatedly clicking while she’s near the cursor will make her pummel whatever the cursor’s over, which will serve as your main method of attack throughout the game. Holding down the button instead will have Xoda fire off a projectile that can go through a line of enemies, good for foes that can be too dangerous to fight up close. 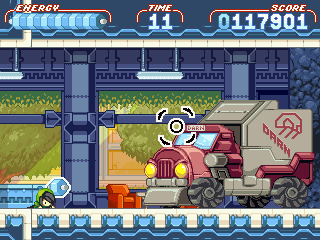 Right clicking brings up a temporary shield anywhere on the screen, which can be used to block certain attacks from hitting you. There are also a couple of special moves, like a flying kick and a somewhat more useful spin kick attack, that can be used by double tapping a direction, or holding down the right mouse button and moving the mouse. While it can take a little getting used to playing a fast paced action game in this manner, it’s actually pretty intuitive once you learn the controls. After that, you’ll constantly be flying through the air and taking out chunks of enemies at once, something that’s hard not to feel awesome doing.

Most of the combat encounters you’ll get into will end rather quickly, usually because enemies go down a lot faster than they did in the previous game. On the other hand, they’re far more aggressive, with so many of them letting off their attacks at once that it isn’t always clear what’s going on. On the easier difficulties, enemies drop so much health that it’s really not an issue, but trying to keep up with what’s going on in tougher settings is a much taller order. Where there are a few places in each level where you’ll have to stop and fight off a wave of enemies, they’re generally fewer in number. Even during these segments, there’s usually something to make things more interesting, like missiles raining down from the sky that you’ll have to block. 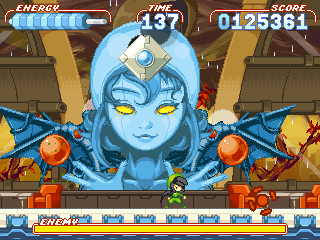 The biggest improvement to Noitu Love 2, more than anything, is just how much more intense they’ve made the experience. It’s not just that everything on screen moves so quickly. More than that, every level is almost nothing but non-stop action at all times. You’ll move from a clock tower where you have to avoid falling rubble and missiles, fight a miniboss, go through an auto-scroller segment where you have to fight off exploding zombie Darns, and Darn priests calling lighting down on you. This is all while trying to get through a gauntlet of guillotines, moving straight into another miniboss. It goes on like that throughout the game, only rarely offering you a moment where you can catch your breath. The fourth stage is especially cool, briefly turning the game into a shoot-em-up where you have to use your beam weapon to draw lines between enemies and certain objects to inflict damage on them.

Any game hoping to give proper tribute to Treasure needs some great bosses, and you’ll encounter several of them per stage. The minibosses themselves are pretty decent, with some cool designs and varied patterns to look out for. It’s the end of stage bosses that are the real highlight, however, with almost all of them having some particularly cool gimmick that makes them fun to fight. A rematch against O2-Joy, the musician boss from the original game, has you utilizing a piano to strike the stage in the background he’s on, while he uses a variety of musically-themed attacks against you. A later boss has you fight Lori’s robotic duplicate from the original game, before the robotic dragon that’s been stalking you across the stage destroys the battlefield, forcing you to fight it off while running across a wheel rolling down the river. All things considered, it wouldn’t be unfair to say that the bosses are possibly the best thing about Devolution. 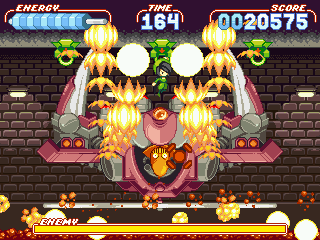 While the game’s rather short, clocking in at somewhere around an hour for your first time through, it’s the extra content that really opens the game up. The harder difficulties really put your knowledge of Xoda’s abilities to the test, and once you’ve cleared that, there are two alternate characters, each with their own unique style of gameplay. All of this combined makes Noitu Love 2 into the sort of game that you might finish only once at first, but will inevitably come back to sooner or later to try and do just a little better at it.

Visually, the graphics have taken a massive leap, resembling a particularly impressive Saturn game. The sprites are far larger this time around and have a lot more character, with even the most basic of Darns sporting a demented grin that makes them more than a little loveable. The larger sprites also help make whatever you need to pay attention to pop out better on the screen, going a long way towards correcting one of the original game’s bigger issues. The bosses are similarly impressive, with encounters that fill the entire screen and having tons of detail and character to them. The music hasn’t improved much since the first game, though. It’s generally rather forgettable, and somewhat abrasive at its worst. 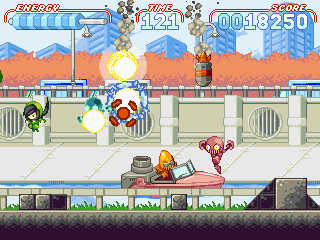 If you’re even remotely interested in the early works of Treasure, or action-heavy games that never let up on you, Devolution is absolutely worth your purchase. There have been more and more attempts to bring out crazy action platformers, both independently and into the gaming industry at large, and this one still manages to compete.

In terms of content, the WiiU and 3DS versions of the game are identical to the PC version. Instead of using the mouse, however, you tap, swipe, and rub on the device’s screen to perform the various moves.