Monster World IV is the only mainline entry in the series without the “Wonder Boy“ moniker. This actually makes total sense, considering the protagonists is now a green-haired Arabian girl named Asha. The vaguely generic fantasy settings of the previous Monster World games have been replaced with a fanciful Arabian setting, making it feel a bit like Disney’s Aladdin from around the same era, albeit with a cutesy, manga flair. The story really hasn’t changed much though, with Asha being chosen to leave her village to rescue some missing spirits and save the world in the process. 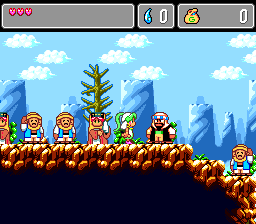 With this final entry in the series, the RPG elements have been scaled down considerably. There is only a single city, Rapadagna, which as usual acts as the hub for the four sub-worlds, which take the form of different temples. However, there’s no real overworld to explore, as you are immediately transported to each of the four sub-worlds through a central temple in the city. In turn, these areas are almost entirely linear, although you can still grab gold to buy equipment in town, as well as health replenishments from the various vending machines found throughout. 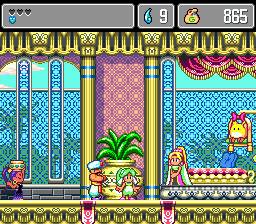 While Monster World IV barely qualifies as an action-RPG any more, as a trade-off, the platforming is easily the best it’s ever been. To aid you in your quest, Asha finds a cute flying blob called a Pepelogoo. She can grab onto it to float, use it to double jump, or throw it at switches. It’s also resistant to fire, so she can carry it on her head as a shield or toss it on flaming lava to use as a platform. 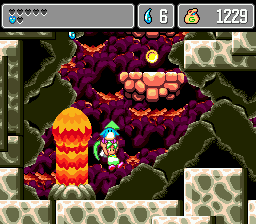 The dungeon designs are far more elaborate than the previous games, largely because they rely on using your Pepelogoo to traverse the terrain. Alas, the tasks presented can only vaguely be called “puzzles“, as most are quite simplistic. Perhaps in order to make up for the lack of exploration the dungeons are also long, really long, usually with multiple boss battles. Unfortunately the game doesn’t think up enough interesting things to do to justify their length, so dungeons begin to grow tiresome after awhile. 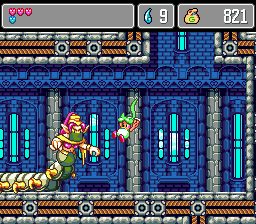 Other than slightly hidden chests and the usual caches of money, the only optional items to find are crystal tears spread throughout each stage. Collect 10 of these and you’ll gain an extra heart on your second life meter. This acts as a backup to the main life meter, which in turn is expanded by purchasing new armor. However, very few of these are actually hidden, so the number of secrets compared to previous games is reduced. 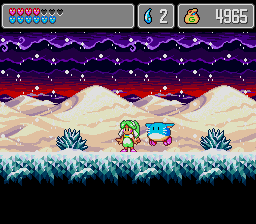 The combat has been changed a bit too. Unlike the previous heroes, who kept their shield out at all times, Asha needs to press down to pull out her shield. Magic spells are also gone, forcing you into melee combat against everything. You can, however, jump and thrust downward, and even bounce on enemy heads, expanding your combat strategy slightly. 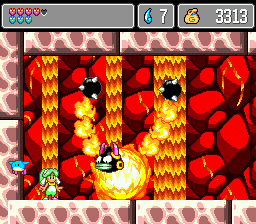 Even though it’s largely a step back for the series, it’s hard not to like Monster World IV. Asha is one of the most adorable heroines to appear in a video game, largely thanks to her expressive and fluid animations. She runs like a proper little lady, arms swaying to her side, and wiggles her butt when opening up treasure chests. When she jumps, you can see the wind against her baggy pants. The rest of the visuals are similarly gorgeous, taking advantage of the 16-bit hardware in ways that Wonder Boy in Monster World didn’t even attempt. Every screen is bursting with vibrant color, side-stepping the grainy graphics usually seen in Genesis titles. 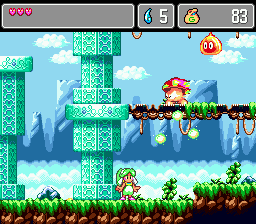 This is also the only Monster World game not composed by Shinichi Sakamoto, with the duties passed onto Jin Watanabe. The title screen theme acts as an overture, with many of the later songs offering variations on the same melody. The entirety of the soundtrack is definitely quite catchy, though due to the recurring motifs, they do tend to grow a bit repetitive. 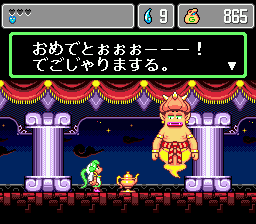 Despite the change in setting, the aesthetics are clearly in line with the other Monster World games. Furthermore, the four spirits to be rescued are the same as the familiars from the previous game and there’s even a reference to the fate of Shion. 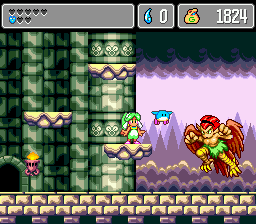 Even though Monster World IV has gorgeous graphics and solid gameplay, Sega elected not to localize it when it was initially released. Although it was fan translated by DemiForce and DeJap in 2002, the game was officially localized nearly 20 years after release, in 2012, available via digital distribution for the Wii, Xbox 360 and PlayStation 3. The official translation is more faithful, and also uses a nicer font. 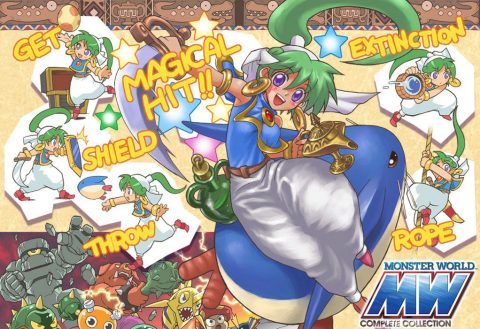