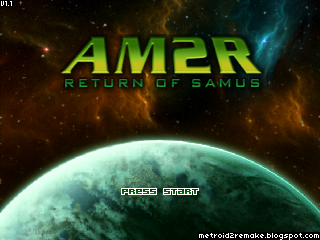 After Zero Mission, some Metroid fans began to wonder: if Nintendo remade the first game, then would they do the second? Unfortunately, they moved away from 2D Metroid games entirely, focusing instead on the Prime series, then eventually following it up with the (poorly received) Metroid: Other M release and other spin-offs. In the meantime, an Argentinian developed named Milton Guasti (working under the name DoctorM64) worked on creating his own Metroid II remake in Gamemaker: Studio for Windows. It was dubbed AM2R (“Another Metroid 2 Remake”, a reference to other similar projects which ultimately never got off the ground.) In 2016, after nearly a decade of on-and-off work, it was finally released for free…and then, predictably, issued a cease and desist by Nintendo within a matter of days. Yet the effort was not wasted, because the product is excellent, one that could stand up as a professional product if not for its background (and the fact that it was only released on computers). 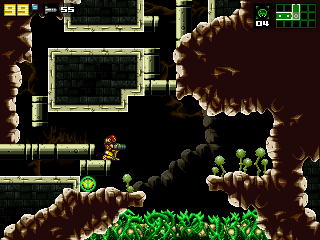 The concept, of course, was to remake Metroid II in the same way that Zero Mission remade the original NES game. This means upgraded new graphics, (some of which were taken from Metroid Fusion, Zero Mission, and Super Metroid), revised structure, additional bosses, new music, and tons and tons of quality of life improvements. Indeed, the game basically plays the same as its GBA forebears. The map structure is based on the Game Boy game, though with significant changes. For example, SR388 was originally somewhat hard to map, because some parts overlapped on each other. With the automap right on screen, AM2R can’t pull of those types of tricks, so the areas were changed and expanded accommodate this. The power-ups from the later entries have been added, including super missiles, power bombs, speed booster, and the gravity suit. Most of these additions – the map, the graphical variation, the music, the faster movement speed – alleviate most of the major issues of the original Metroid II. 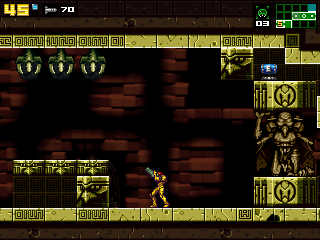 Each of the areas has been given their own unique identity rather than just endless caves, including the robot factory area near the beginning, a research center, and a cylindrical weapons testing facility called The Tower. One of the very first large rooms you encounter, with the gigantic structure in the middle, has been turned into a shrine. Even though the structure is similar, many areas have been completely redesigned and added, and are far more distinct and interesting. A few new elements have been added, like a few sections where you remote control a hopping robot or bounce into the cockpit of a drilling machine. The game keeps track of how many Metroids are remaining overall (like the original game) but also notes how many are left in a given area before triggering an earthquake to proceed onwards. Taking a note from the Prime games, there’s a log book that’s automatically activated when entering new areas or encounter new areas, given some description and backstory for each of them. Indeed, this isn’t solely an extermination mission like the original game; technically, you’re also supposed to be looking for a missing Galactic Federation squadron who, as you’ll eventually learn, didn’t exactly end up with good fortunes.

The Metroid behavior has changed in varying degrees. Alphas aren’t much different, though they can only take damage on their underside, but the rest have been given newer attacks and have more elaborate attack patterns. The Queen Metroid fight has been greatly expanded as well. With this are some extra boss fights, including with the Torizo statue (similar to Super Metroid), an encounter with Serris (taken from Metroid Fusion), and a few new bosses, including a mechanical unit known as The Tester, which absolutely floods the screen with projectiles in vaguely bullet hell-type patterns. 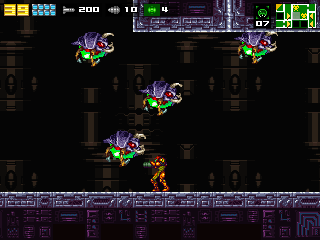 Visually, SR388 doesn’t quite have the unique color schemes of Fusion or the comic book-style art of Zero Mission, as it’s more subdued, similar to Super. Many of the assets used were initially created for a portable game machine, and when reworked to fit a 4:3 aspect ratio for a monitor, makes everything feel a little small and zoomed out, but it doesn’t really harm the game. The soundtrack is fantastic, consisting primarily of remixes of past tunes but done in a similar style to the Metroid Prime games. This includes an outstanding version of the surface theme, as well as the Hydro Station that arranges the Brinstar theme from Super Metroid so subtly that it may as well be its own theme.

AM2R is well paced and generally not too difficult, especially since save rooms also now restore health and ammo a la the Castlevania games, though some boss fights are still considerably challenging and it’s a little longer than the other GBA games when just doing a standard run. It has a ton of nods to other Metroid games too, beyond the bosses and music, like some references to Phazon (from Metroid Prime) as well as ships designed like the ones from the other Prime games. It’s definitely the work of someone who’s a big time fan of the series. Still, while the level design is excellent, it can’t help feel like the puzzles aren’t quite as interesting as the GBA games, though that’s to be expected considering there’s only so much you can do with the items given, and there aren’t any new ones. If anything, the only minor downsides are the occasionally tedious Metroid fights – they’re better than they were before but they’re still pretty samey, especially when you get the tougher and more aggravating ones. But even that is just keeping consistent with the original. It does ditch one of the cooler moments of the Game Boy game though, as you whittle the Metroid counter down to zero and expect a final encounter, only for an egg to hatch and for you to fight nine more of them. This battle still occurs, but the global Metroid counter still accounts for them, so it kind of ruins the surprise. Other than these (extremely minor) nitpicks, AM2R is a brilliant remake, especially impressive considering it’s the work of a singular devoted fan. 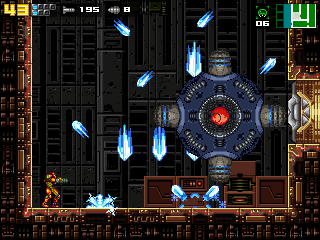 While the developer stopped working on the title and ceased official distributing it after Nintendo’s notice, some fans have provided subsequent patches that add features and fix bugs (and even fixes the issue with the Metroid counter at the end). And while it seems like Nintendo was being needlessly cruel at the time, at least they let it see release, so it’s still easy to find from various sources if you search around. Plus, the work that Guasti put into this game earned him a job at Moon Studios, the developer of Ori and the Blind Forest, a very Metroid-inspired title.