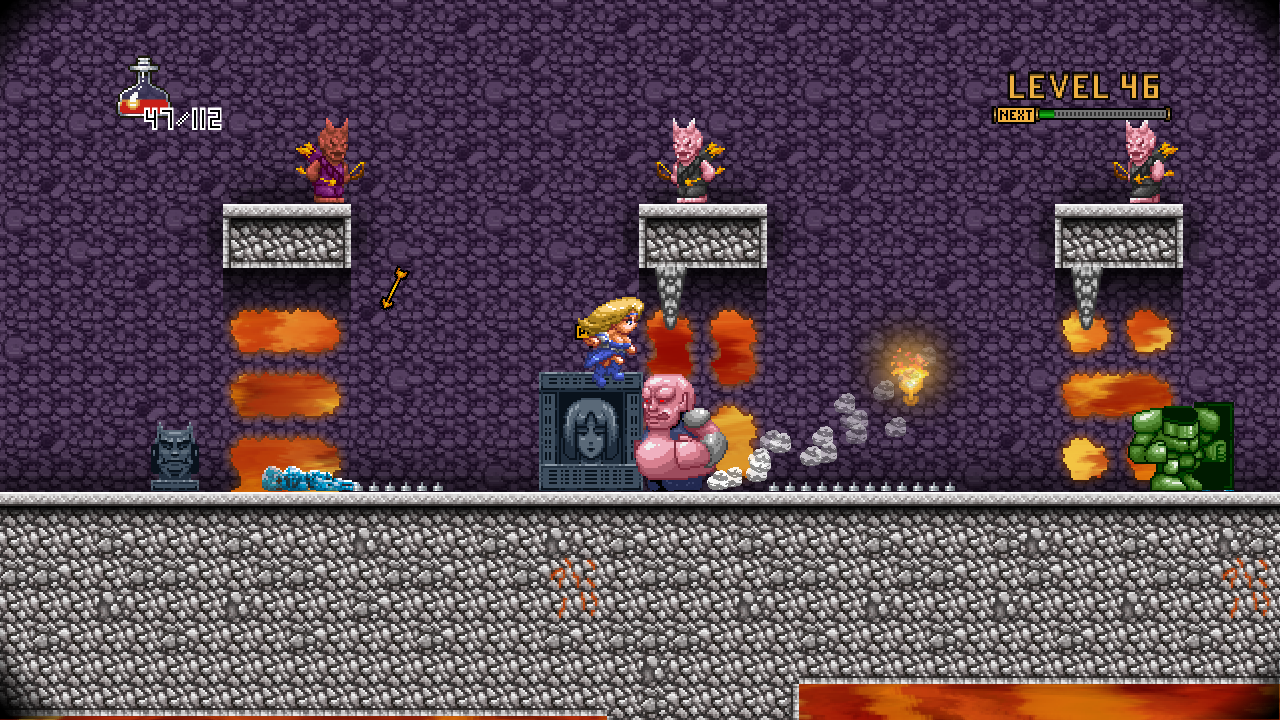 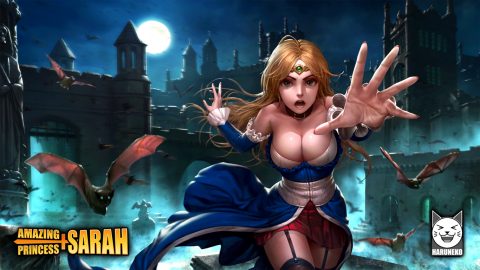 To get that huge elephant out of the room at the outset: Yes, Amazing Princess Sarah is as obsessed with female breasts as it looks like on the title screen. Each and every female sprite has an enormous bouncing pair, and it isn’t covered up by much. If you tend to find this kind of shameless titillation distracting, you will find it distracting here. The most disturbing part is not related to boobs, however, but a boss that’s just a pair of legs in thigh-high boots with a huge demon head on top. Well, at least the game does something for progress on another end, by turning around the usual damsel-in-distress trope, just like the developer’s earlier game Akane the Kunoichi. Instead of ninja action, however, Amazing Princess Sarah is a take on gothic horror like Ghosts ‘n Goblins or Castlevania, except the game cutes (and sexes) things up by several orders of magnitude. The story is told just as quickly as in the classics: Sarah’s father the king has been kidnapped by an evil succubus queen, and thus the princess has to fight through a number of castles to free him.

Where Akane was a razor sharp action game, Amazing Princess takes a deliberately more sluggish approach, even taking a hint from Super Mario Bros. 2. Sarah is equipped with a sword, but since it needs several hits to kill most enemies, who keep approaching relentlessly, it’s quickly delegated to a supporting weapon role. It’s much more effective to pick up one of the pieces of furniture around and fling it at a monster. Corpses stay around for a bit, making for more potential projectiles. There’s even a bit of Kirby’s Adventure in there, as the enemies have different properties when thrown – archers explode in a salvo of arrows that rain down on nearby enemies, fire elementals cause walls of flame to rush into both directions, and the ghosts (which behave the same way as Super Mario‘s Boo) rush forward in a straight line, taking everything in the way with them. There are also some less useful ones like the dangerous ogres, whose weight only makes Sarah slow and unable to jump while holding them. Many enemies clearly reference one or the other side-scrolling action classic – apart from the ghosts, there are Zombies that rise from the ground like in Ghosts ‘n Goblins and even keep standing up unless Sarah throws them away and they fall apart upon impact. Shielded knights can only be hit from behind, and Bats keep flying towards the heroine in an infuriating sine wave, just like many flying enemies in games like Castlevania.

Defeated enemies yield experience, which keeps accumulating even after dying. This may sound like it could cheapen the difficulty curve, but each upgrade only gives a slight attack bonus and a measly 2 HP whereas the toughest enemies cause up to 30 points damage (in the first playthrough). So it doesn’t really help much in any given situation and only makes a small difference in the grand scheme. Amazing Princess Sarah is by no means a Metroidvania – there is a bit of backtracking involved at times to flip switches, but overall the castles are very linear. Furthermore, the only pick-ups are hearts gained from destroying Castlevania style wall torches, which merely restore two hit points each.

The levels use all the classic tricks of the platforming trade (some elements recycled from Akane) and are impeccably designed to tease you. Sarah’s movements have a bit of slipperiness to them, which can be infuriating for the required precision platforming. The game is very difficult, but not excessively so – angel statues provide checkpoints and healing every once in a while, and only towards the end things get mean with a few hard, long platform sequences followed by an army of tough enemies, with no statue in between.

The game’s only true weak point are the bosses – the first two are laughably easy, then the third fight becomes unfair all of a sudden, with two giant golems who can fill the entire screen with doom, minus just a few pixel lines in between, which are invisible because their hit box wildly differs from the actual sprites. When a minion happens to walk into that spot at exactly the wrong time, taking damage is all but unavoidable. (Pro-tip: it’s better to run into the minion and take lesser damage thanks to the few frames of invincibility.) The huge monsters are also made with Flash-style animation, as opposed to the pixel art used for all other sprites. About half of them don’t clash too badly with the rest of the graphics, but the stage 1 and 3 bosses look extremely sketchy and unpolished, as if the artist just gave up at that point.

There are only five stages, but depending on player experience, each one of them can take well over 30 minutes to clear. Even after that, Sarah and her freed father are just chased away by the true boss, and New Game+ is unlocked. In Angry Princess Sarah mode (nice touch: when going back to the title screen from it, the title actually changes according to the mode), the heroine is haunted by a ghost of herself – the game just claims she died a lot in her first run through, but that’s a pretty safe bet to make. Especially the platforming becomes much more challenging with an immortal grudging spirit at your heels (she acts just like the Boo-ghosts). But even that’s only the start of it – there are six different New Game Plus modes, each impairing Sarah in some way or the other. Drunk Princess Sarah makes the screen swing back and forth constantly, which is more nauseating than difficulty-increasing, but at the same times the enemies put the pressure on much more severely. Further modes take away ever more means of attack, but in turn the heroine gains a triple jump. Eventually things get so tough that probably only the most enduring players will ever see the end of it.