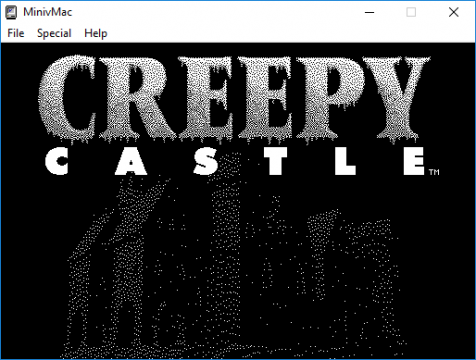 The article is featured in HG101 Digest Vol. 3: The Guide to Retro Horror. Please check it out!

Those few who chose a Mac in the early 90s over a DOS PC or an Amiga had a selection of games to choose from that could be described as “eclectic”. What you wouldn’t be likely at all to find, however, would be a side scrolling beat-em-up of any sort. Creepy Castle sits at the one exception, and while it’s far from a real classic, it does at least serve as one of the best action games you could find on the early Macintosh. In some ways, you could almost think of it as an alternate take on Splatterhouse, one built on the obtuse puzzles and goofiness the computer games of that era were known for.

While Splatterhouse was a blend of such horror classics of the 80s like Friday the 13th, Re-Animator, and Evil Dead, Creepy Castle’s inspirations are clearly the old Hammer Horror films of the 50s and 60s, with all the werewolves and vampires that implies. A mad scientist has kidnapped a girl, and you, as the unnamed hero, take it upon yourself to free her from his clutches. Despite lacking any supernatural ability or some kind of mystical mask, snarky or otherwise, your hero can freely pummel the horrors ahead with the best of them. There are four different areas to the mad scientist’s evil estate, each of them with their own set of hazards and foes to deal with. You’re free to tackle the levels in any order you wish, although it’s a rather poor idea to jump straight into the doctor’s dungeon. 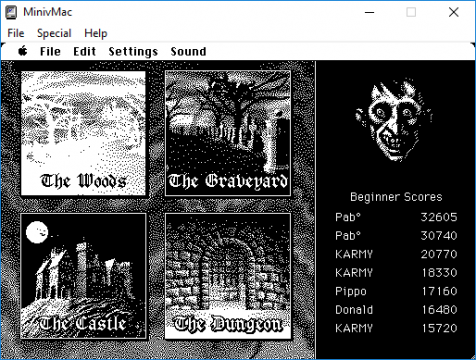 The hero’s moveset is simple, with a punch, and kick, and variations that can be performed while jumping or crouching, not unlike the moves seen in Irem’s Kung Fu. Most of the enemies you’ll encounter are just fragile enough that the lack of variety in the moveset isn’t much of a concern, however. You’ll also find special items that can either be collected from the ground or from defeated enemies, which can help deal with some of the more annoying foes. Projectiles like knives and rocks can take out enemies at range. You’ll also come across things like wolfsbane and holy water that will clear the screen of foes, complete with a somewhat weird looking effect of the item in question rapidly spreading across the screen. Occasionally, you’ll also come across axes and shovels, although the loss of your jumping ability and their strange hitboxes means they’re best left ignored.

While at first glance, progression through each level looks like it’s as simple as walking from one end of the screen to the other, there’s a few complications in the way. The first three levels each have a special power, and you’ll need all of them to have a chance of defeating the mad scientist at the end of the fourth stage. You might try killing a werewolf with a jump kick, for instance, which will somehow their “jumping ability” onto you. This makes your jump kicks far more powerful, something you’ll need for the final battle. Other upgrades are earned in a similar fashion, and they all make fighting off the enemies much easier. 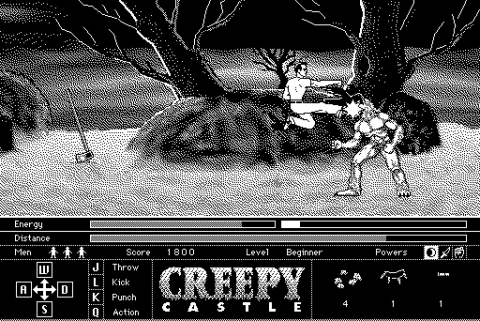 Each of the four stages has a boss at the end, and somewhat unusually, these play out more like an adventure game puzzle. While each of the bosses can be defeated through conventional means, it’s a lot more difficult to do so, especially if you run out of projectiles to use against them. Without a walkthrough, you can expect to end up going through the game several times to try and figure out their weakness. It’s an interesting gimmick the first time, but unfortunately, on repeated playthroughs, it gets somewhat tedious. The giant skeleton at the end of Stage 2 is probably the ergregious example of such in how convoluted these fights can get.

You’ll need to bring a shovel to him, but not for something as obvious as hitting him. Shovel or not, venturing too close to him will have him instantly kill you. Instead, you need to raise your shovel with the kick button as soon as lightning strikes in the background, thus bringing it down onto him and you. The lightning will kill you, however, if you don’t have two rubber gloves, and those can only be found by punching the vultures that you’d find earlier in the stage until they finally drop them both. The problem is that the birds are incredibly difficult to land a punch on, and while you’re flailing around, you’re often dealing with other enemies trying to kill you. Even if you can land a hit, it might take several vultures and a lot of lost health before you get those gloves you need. 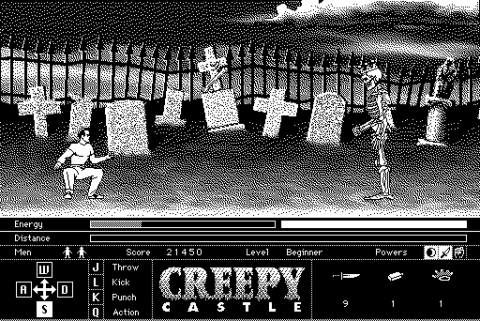 If you don’t have a boss’s weakness ready, or you run out of projectiles to throw at it, there’ll be no way to win, and no way to try again without losing all of your lives. Thankfully, you can choose any stage to start, but game over means losing all your upgrades. At the very least, going through all the levels doesn’t take terribly long, clocking in at about twenty minutes if you know what to do. That makes a lot of the frustration somewhat more tolerable if you’re trying to brute force out the puzzle solutions, although not by much.

Before you reach each of the bosses, however, it’s a very basic brawler, only somewhat beyond something like 1984’s Kung Fu. When you’re not trying to get ready for the boss, the level mostly involve walking to the right, jumping over the occasional pit, and jabbing at whatever enemies get in your way. Each of the four areas does do enough to keep themselves unique, however, adding particular enemy types and complications on your way to the exit. The graveyard stage has spiders that continually try to crawl onto you and hands that reach from the earth to grab you, while the castle stage has a fight through a bell tower to grab a necessary key. It makes for just enough variety to keep the simplistic combat from ever getting too dull. 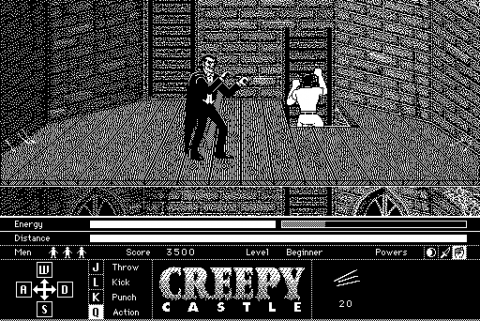 What the game lacks in gameplay, however, it certainly tries to make up with presentation. The black and white graphics on early Mac computers suit the gothic horror stylings well, and the sprites are well animated. There’s other nice touches to point out as well, like the Crypt Keeper-esque ghoul who shows up to give game hints and deliver dumb puns between stages. The sound is more than adequate as well, with plenty of digitized sound effects. This does make the main character come off as a bit of a doof, however, like the way he’ll randomly exclaim “Power!” upon beating a boss or getting an upgrade. There’s no music to be heard, except for a short theme on the title screen and a few stings between levels.

Overall, Creepy Castle probably isn’t an absolute necessity to play, especially giving the difficulties of Mac emulation. It is a valiant effort at making a serious action game for a computer generally handled them the most poorly, however. If you particularly enjoy the Macintosh, early beat-em-ups, or cheesy horror, there might be something in there to interest you. Otherwise, a Youtube playthrough will be more than enough to show all the best parts with none of the frustration. 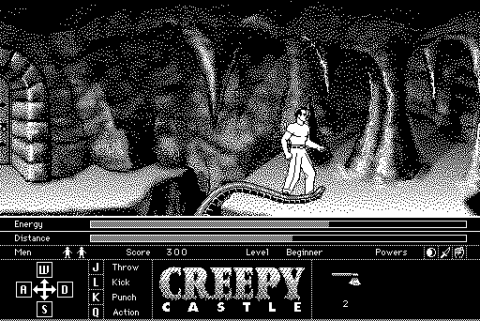 Interestingly, there’s actually two releases of the game, with Creepy Castle being an updated version put forth by an actual publisher. The original version of the game, known as Frankie’s Dungeon, can be found online with a little searching. The two versions have almost entirely different graphics and sounds, with Castle having a more dithered, photorealistic look. Frankie’s Dungeon, however, has the voice talent of Dick Noel, who voiced the main character in Dark Castle. The two games are almost identical in terms of gameplay, however, except that Creepy Castle offers the save feature. Because of this alone, it’s probably the better version to try.