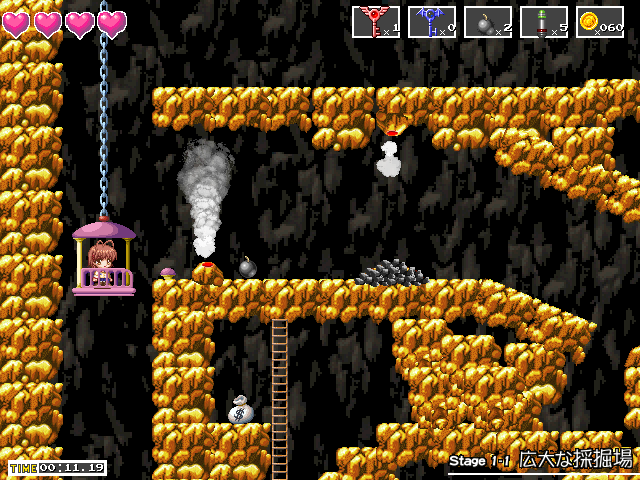 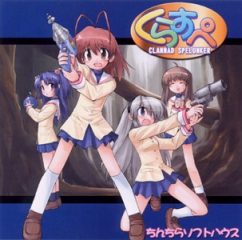 There was a twenty two year gap between the original Famicom Spelunker and Spelunker HD, not counting the illegitimate Famicom sequel. During that time, the hero of Spelunker found infamy amongst Japanese internet memes, prompting doujin group Chinchilla Softhouse to create their own updated version in 2005. Dubbed Clannad Spelunker, it feels and plays like a true sequel, except the old spelunker guy is replaced with the girls from Key’s visual novel/anime Clannad, abiding by the rule that every single doujin game must have a significant moe quotient. 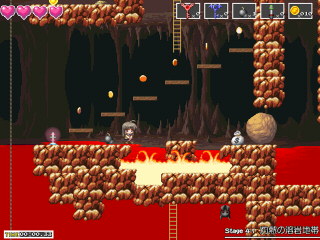 At the outset you can pick from four girls, each with different characteristics. Nagisa can double-jump, for instance, while Kotomi is fast but weak, and Tomoyo has a strong gun and lots of health but is pretty slow. The ultimate goal is to explore the five stages of the cavern for 48 different treasures, ranging from innocuous things like bridal veils to more serious things like ancient swords. There are also numerous hidden characters to find, making this a fairly meaty game.

The basic gameplay is faithful to Spelunker, although a bit more generous. You can fall slightly farther than you could in the NES game, and it at least has the courtesy to let you hit the ground before killing you, since technically some characters can save themselves with a double jump. With all of the additional skills, it’s smoother to play, although it’s still pretty strict with jumping off vines and so forth. The guns work a bit differently, though – it works like the arcade game, as the heroines fire projectiles and need to line up their ghosts to kill the ghosts, instead of just facing in the general direction and firing. The ghosts (and other enemies) tend to take several hits, as well. The air meter is gone, so there is no more time limit.

Like the NES game, the goal is to explore, finds keys and unlock doors, which leads to further delving. The types of caverns include, including the standard rock cave, jungle ruins, water caverns, a volanco area, and a pyramid. At any time you can return to the entrance to save your game, although it only records the treasures and characters you’ve found and not your actual progress. In other words, every time you play, you’ll still need to get to the exit to unlock the next area. However, there are transporters that let you revisit any old areas, providing you don’t exit the game completely.

The 2D graphics are decent, with a resolution at SVGA level, although obviously the bright-haired schoolgirls clash with the rest of the scenery. The newly composed music is quite catchy, although the jibber-jabbering and shrill whines of the girls get annoying quickly, and can thankfully be turned off. It strikes a good balance between being faithful to the original and fixing up some of the more frustrating elements – even slightly moreso than Spelunker HD – although the limitations of the save function ultimately hold it back.

A sequel was planned at one point, but Chinchilla had to cancel it due to lack of funds, and instead decided to concentrate on some of their other games. Check out their webpage for more of their products.