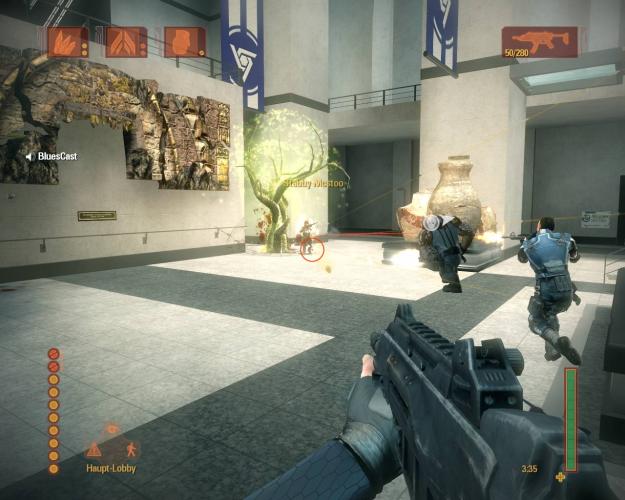 It wasn’t the first attempt FASA Interactive had at an in-house developed Shadowrun game (more about that on the next page), but the franchise only made it through in 2007, after ten years of MechWarrior. With this game being in the hands of the original Shadowrun company, surely this would be the ultimate adaption of the pen-and-paper RPG? Well, not quite.

When producing a computer adaption of a pen-and-paper RPG, it seems like a no-brainer that the result would also be more or less in the RPG genre, but FASA set out to spawn the first “beloved game franchise to FPS” outrage, even before Fallout, Syndicate and X-Com jumped on the bandwagon. But Shadowrun was even worse than all those: While apparently the game started development as a single player game subtitled The Awakening, what people eventually got to play was a strictly multiplayer focused arena shooter. 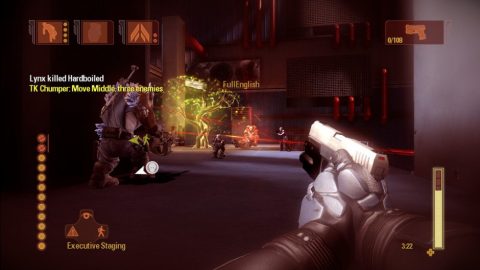 The game at least tries to do the Shadowrun universe justice within the confines of its genre, but there’s only so much that can be done. For each match, players get to choose between the typical fantasy races of humans, elves, dwarves and ogres. Each of them got different base attributes – elves are fast and fragile, but regenerate health over time, dwarves have the most magic essence necessary to use skills, but recharge it the slowest, which they make up with the ability to absorb essence from objects and other players, and trolls are the tough and heavy ones that grow protective spikes when they are hurt. Humans are just average on everything, but they get a slight boost to their starting funds. The tutorial also suggests typical weapons, magic and tech for the classes, although in reality anyone can buy every skill.

The Tech and Magic spells are where FASA tried to bring in at least a little bit of the Shadowrun identity. Before each round, a buying menu pops up that allows purchasing them with limited funds. One shoulder button is always reserved for firing the weapon, but the other three can be mapped to the available skills at any time. Magic has little to offer in terms of direct damage, most spells are geared towards healing or hindering the opponents’ movement: Strangle grows a field of crystal spikes that do slight damage upon touching, but are mostly meant as obstacles. There is also a slightly weaker variant of Star Wars‘ force grab called Gust. Summon calls upon a demon that can be ordered to either guard a spot or try to destroy a certain enemy. The healing powers are Tree of Life, which grows the eponymous tree in whose shadow everyone – including opponents – can recharge their health, and Resurrect, which brings a killed team mate back to life. At least as long as the caster survives, in case he gets shot, too, the revenant starts to slowly die again. Another really peculiar skill is Teleport, which allows to make small warp jumps into the current moving direction, even going up when jumping or down when crouching. This is a very viable method to close in on opponents when wielding a short-range weapon like the shotgun, but also to get around the arena quickly, as it allows to teleport through walls and ceilings. Finally, Smoke turns the caster invulnerable and barely visible for as long as the essence lasts. 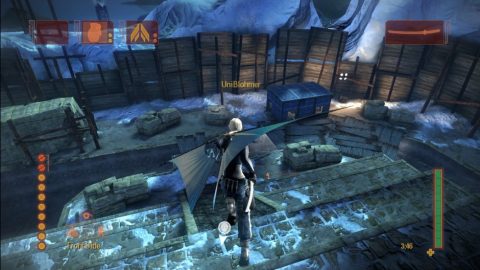 Tech is even more supplementary in nature. Aside from the standard grenades everyone starts out with, there are also Anti Magic Generators, also thrown as grenades, who suck up the essence of everyone and everything close to their location. The Glider allows to make extremely high, but slow and floaty jumps. Smart Link increases accuracy, prevents friendly fire and allows zoom with every weapon. Wired Reflexes gives a permanent speed boost (and a short, health consuming sprint), but is only really effective in combination with the katana (see the next paragraph). The cheapest skill is enhanced Vision, which simply shows the locations of nearby enemies through walls for a short time. Essence used up in applying the skills slowly recharges over time, but those skills with a persistent presence keep some essence slots reserved for their duration.

The weapons, on the other hand, are mostly stock FPS stuff (SMG, rifle, shotgun, sniper rifle, minigun, rocket launcher), except for the katana. This melee weapon triggers a switch to a third person perspective, making it easier to be aware of the surroundings, because maneuverability is getting really important. The wielder can deflect other katana attacks and – with Wired Reflexes equipped – even bullets. But more effective is the approach from the other direction, as backstabbing leaves the victim bleeding out within seconds. It is possible to carry multiple weapons at a time, but other than tech and magic, they’re lost when getting killed, so buying more than one is often not that feasible. Weapons can also be picked up from downed opponents.

Unfortunately, not all of the features that sound great on paper work all that well in execution. The resurrection and respawning system is the biggest culprit here: Corpses keep lying around the arena until they’re either destroyed by an opponent or resurrected by an ally. This means a player who gets killed early in a round is forced to wait for several minutes if their body is destroyed or no one resurrects them (which is especially likely in the early rounds of a match, when players don’t have many skills yet), making Shadowrun just a horrible game to start getting into as a beginner. It also feels really unsportsmanlike to shoot at downed opponents, and the whole body destruction mechanic seems designed to seed bad blood between players. 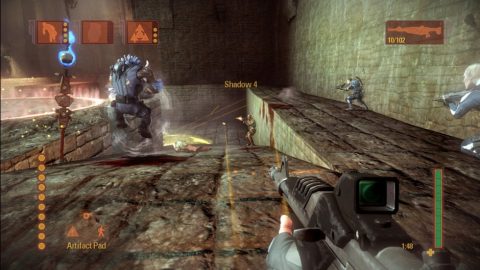 The money system is also hasn’t really been thought through: While there is a base “wage” in each round and a bonus can be gained with several actions winners almost invariably get more funds than losers, giving them a greater headstart with each subsequent round.

The game’s feature list also is surprisingly barebones compared to more recent arena shooters. There are only three modes, two of which are almost the same: In Extractions both teams race to snatch an artifact to bring it to their extraction point, and in Raid, one team is dispatched to defend it from the other instead. This artifact differs from most other games in that it is also used as a melee weapon. If the player uses any skills or firearms, though, it is dropped automatically. That function also comes into play in the team deathmatch mode Attrition, where the artifact is the only weapon that can destroy bodies. The available maps are also not that many, and not very dissimilar at that. Since the game was published just before the DLC expansions became the norm, so there is no additional content beyond the vanilla package.

Six years after the game’s release, it’s still easy to find running public matches (although the game had been promoted as a free Xbox Live Gold membership bonus shortly before this writing, so this might have had something to do with that), although the matchmaking is a bit clumsy. The program just automatically scans through the games and enters players into whatever session ends up first in its judgment on previously chosen preferences and “TrueSkill” data, with no option to select from the available matches. So it’s not unusual to get dropped into the same game over and over again even after losing connection several times, or in a match where a new round has just started, resulting in yet more waiting time. At least the game allows for Xbox 360 and Windows users to play together (although artificially locking out Windows XP in order to promote Vista was a rather nasty move). 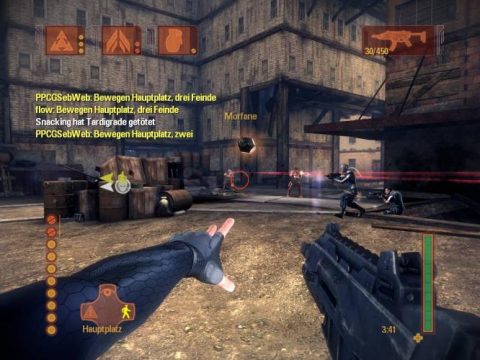 Shadowrun is still a decent and sufficiently interesting arena shooter regardless of its flaws, although there are far better alternatives out there by now. Even many of its more peculiar features have equivalents in wacky genre specimen like Gotham City Impostors, which also beats Shadowrun by now. There’s also not much reason to return to it for a love of the franchise – it’s connection to the RPG is very loose, the most striking omission being the Matrix. Hacking the virtual reality is no doubt the number one aspect associated with Shadowrun. Sure, implementing it in a multiplayer FPS would have been difficult without developing completely new modes, but it’s not even alluded to here. Despite the gadgets, the whole setting also feels much more low-tech than “true” Shadowrun.