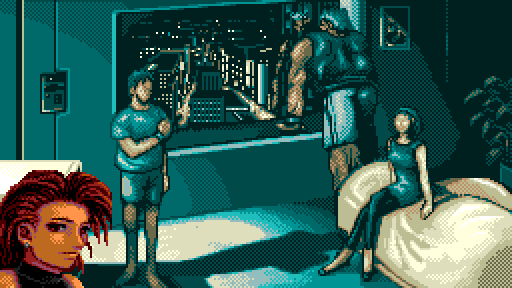 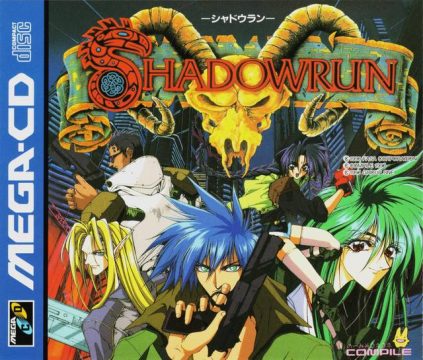 Most English speaking Shadowrun fans are pretty familiar with the SNES and Genesis versions, but there also was a Mega CD installment released only in Japan that’s completely different from the others. Created by Compile in conjunction with Group SNE, the role playing company that published the Shadowrun game books in Japan, the Mega CD version is part digital novel, part RPG. The game is broken up into several chapters, and focuses on a group of four shadowrunners in Tokyo, a long ways from the Seattle setting of the previous games.

The investigation scenes are much like Snatcher, with a single still picture representing the location and little portraits of the people that can be talked to. Everything is menu-based, but it’s all incredibly simple. Most of the time is spent interrogating people, but there is no choice in what to ask about – all that’s to be done is selecting the “talk” icon over and over and over, until more options open up. There are no items to use or puzzles to solve – these scenes are even less of a game than Snatcher was. 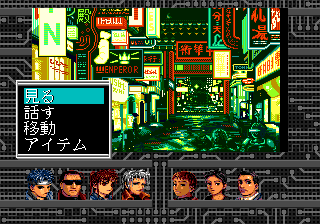 Eventually, the view will switch from the first person scenes to overhead exploration segments, which play out like a typical Japanese RPG. These look and feel a lot like Phantasy Star II, what with the blue-haired hero leading the way and his three compatriots following behind. However, much like the investigation scenes, they’re little more than stumbling around until finding the next event trigger.

At some point the party will get into a fight. Combat is similar to strategy RPGs like Shining Force, where each character is moved around the field and can attack with distance weapons like firearms, melee weapons like swords, or magic spells. Much like the Genesis game, everyone character has two energy meters, physical and mental. Damage caused by guns or spells drains the mental meter, while physical attacks drain the other one. Casting magic also depletes power from the mental gauge. When either of them drop to zero, that character dies. In order to give the game more of a tabletop role-playing feel, every time someone attacks or defends, dice are shown rolling at the top of the screen. They stop at the press of a button, which then determines the strength of the attack, if it hits at all. The whole game feels really, really unbalanced, as there’s very little actual strategy to these battles – the outcome is usually dependent on what weapons are equipped or luck with the dice. 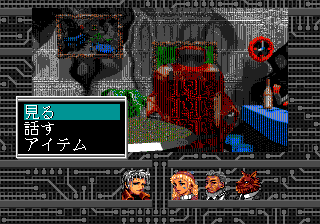 At least there are a lot of ways to customize the characters. There are tons of weapons to buy, ranging from several different classes of guns, with the ability to customize almost any of them. Cyberware to enhance other abilities is also available, and Shamans offer spells and magic upgrades. If a character is not doing enough to damage or taking too many hits, their die pool can be adjusted to stack the odds in favor of different attributes. Unfortunately, since all of the battles are pre-determined, there’s no way to gain extra cash, making it easy to get stuck in a rut if under-equipped.

The biggest draw of the Mega CD Shadowrun is the story, which of course is going to be completely lost on anyone who doesn’t speak Japanese. Most of the characteristics of the Shadowrun universe are here, like Orcs, Troll, Elves, and the like. There’s a whole lot of dialogue, requiring a lot of clicking through to get anywhere. Some chapters have branching scenarios, which is kind of cool, but seeing them all requires to keep saves at the right points or to sit through the same plot scenes over and over again. 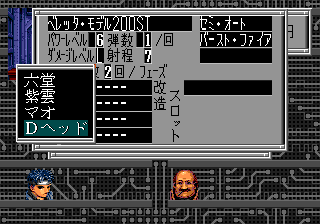 There’s barely any advantage for this game being on a CD-ROM. Most of the graphics are simply still pictures, and they’re roughly on the same level as Snatcher. The rest of the graphics look substandard even compared to cartridge games. The music is generated from the Mega Drive sound chip, and while some of the tracks sound cool, they loop too quickly, and get quite tedious. There are no voice overs, only a handful of grainy FMV scenes. Most of them take place in cyberspace, which has laughably bad computer graphics representing the innards of the Matrix. Occasionally the heroes have to “hack” into computer or “fight” enemies, although this just involves picking programs from a menu.

Since Shadowrun was one of the last games released on the Mega CD, it’s also fairly expensive, usually approaching the triple digit range. It’s not worth the effort to slog through the plot without understanding it, as the underlying systems are too mired in games of chance to really be much fun. 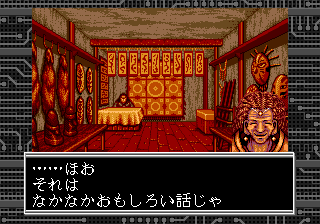