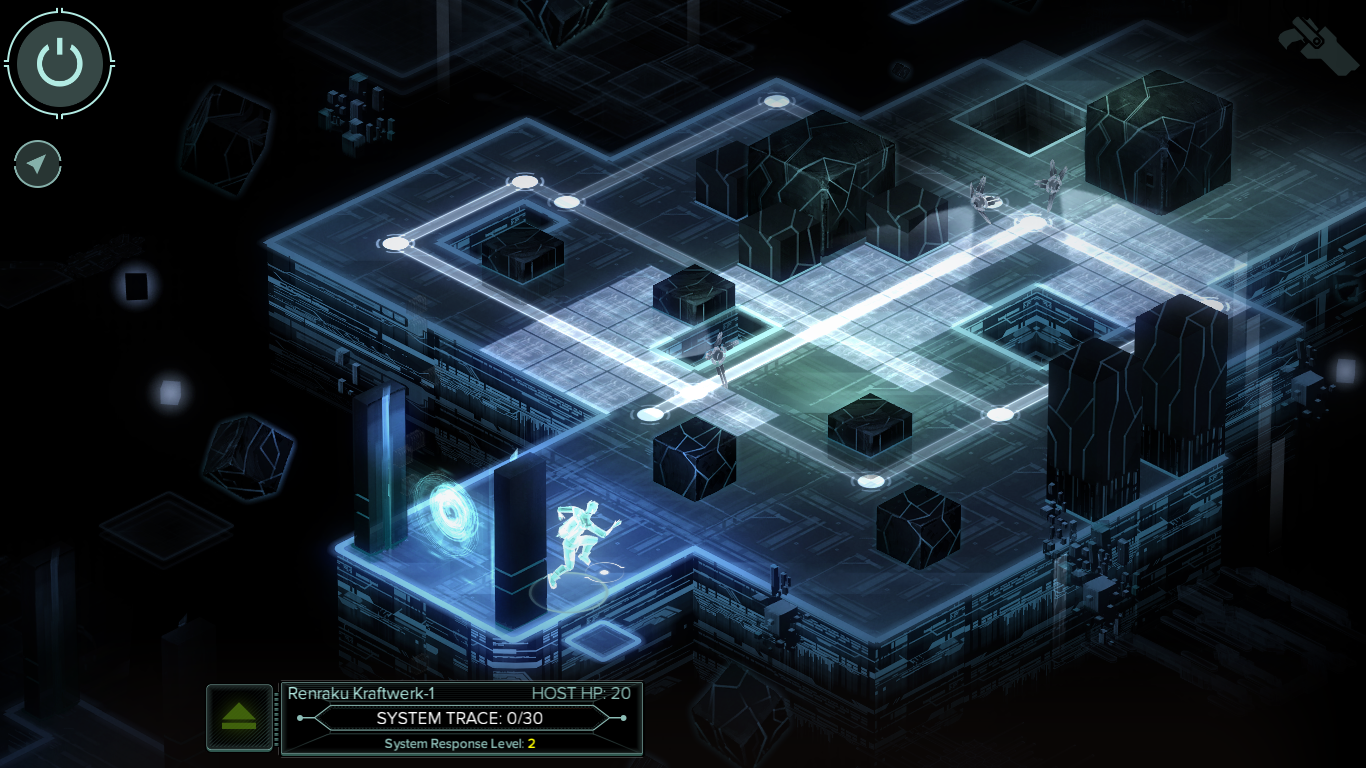 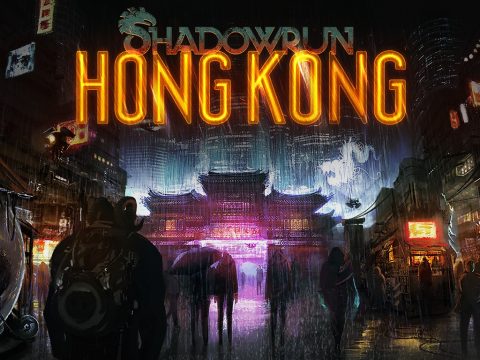 Shadowrun: Hong Kong ended up being kickstarted like Returns was and managed to get every single stretch goal, resulting in two extra party members, more runs, and an entire epilogue campaign that wraps up the loose ends of the main campaign. It’s a meatier, more complicated package than Dragonfall, and while not as thematically powerful, it more than makes up for that with fantastic character writing, better designed runs, and increased production values.

Hong Kong takes place in the titular Chinese city, where corporations are the government instead of simply influencing it. Your character and their brother Duncan Wu have come all the way from the states to see their adoptive father Raymond Black, who’s called them to his birthplace under mysterious circumstances. Things quickly go wrong, as the two meet a team of shadowrunners hired by Raymond to take him inside the Walled City, the largest known slum in the world and a place of endless misery. Two of the runners and Duncan’s mentor Carter are killed by HKPD, and you and Duncan, along with the surviving runners Gobbet and Is0bel, are framed as terrorists. The runners decide the only option left is to help you and Duncan burn their SINs and become shadowrunners for the Yellow Lotus organization, where they’ll have the power to find those who crossed them. As you look for the truth behind what happened to Raymond and who is trying to kill you, things become complicated by a mysterious hooded figure appearing in your dreams …and the dreams of everyone around you. 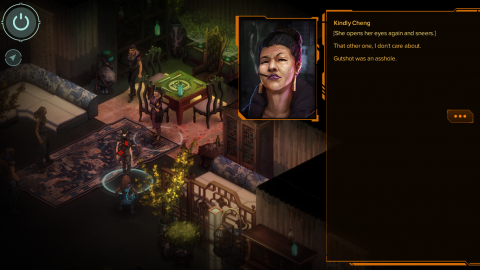 Hong Kong‘s narrative lacks Dragonfall‘s strong structure, and many of the runs you can do for the Yellow Lotus don’t actually have to be completed. However, there’s no reason to skip them, as every single one gives a good deal of money or karma, plus are just a delight to play on their own. There’s a greater variety to choose from, and much more cause and effect present, as choices in many runs can impact later runs and the final run of the main campaign. Bloodless runs are also far more feasible than ever, with a greater amount of options to tackle each problem than ever before. There’s even a bit more karma given out this time, plus far less restrictive third choices. The game’s main trick for that comes from your party members.

There’s a total of five different party members you can recruit to your team, and bringing different characters on runs can result in completely different options beyond simply having Is0bel act as a decker. The serial killer investigation run is a great example, as everyone in your party at the time offers something different to gathering clues that your character may not have access to. There’s also plenty of amusing changes if you bring Gaichu on runs, as he’s a ghoul and tends to freak people out just by his appearance, which can be both a positive and a negative. This all makes your team much more useful beyond fights, and they offer more lively commentary during runs, especially Gobbet, Gaichu, and Ractor. 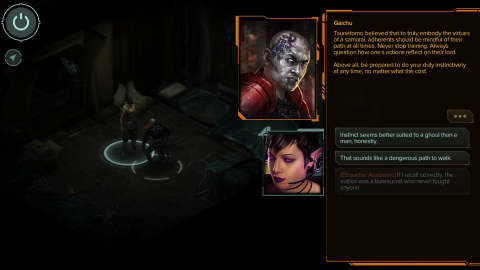 Hong Kong also trades the more down-tune atmosphere in Dragonfall for a good share of black comedy and exaggerated personalities. Duncan, the most level headed character, is a meathead with an anger problem, and the equally seemingly normal Is0bel proves to be so sensitive that she can barely function in social situations and jumps to conclusions. Ractor is an actual psychopath, Gaichu is a former Japanese imperialist who has taken to eating people to live a bit too easily, and Gobbet …wow. Imagine Blitz, except somehow more impulsive, lacking any sort of common sense, and with a habit of eating actual garbage constantly. She almost always has something amazingly ridiculous to say, and it’s great.

These new party members also have much more interesting upgrade branches, relating to the duality of their personalities in some cases, like Duncan either specializing in assassination abilities or police training, or Gaichu learning new sword techniques or gaining ghoul powers. There’s a greater deal of complexity to them than the Dragonfall cast, if only because they’re all so heavily at odds in their belief systems, yet stick so close to them at almost all times. Ractor alone is one of the only examples of a realistically written psychopath character I’ve seen in a game, the other being Jade in Tales of the Abyss. The gang ranges from cartoonish to nuanced in their portray, and usually within the same moment, especially with Gaichu and Ractor. They’re all simply a delight to talk with, especially Gobbet, the rat shaman who lives exactly like a rat. 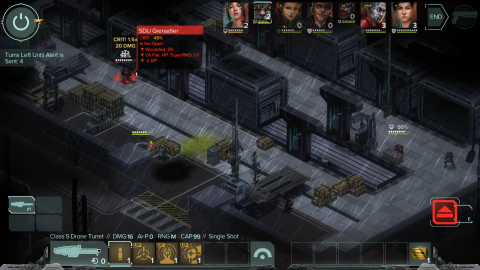 Hong Kong still has a family theme, but far more literal and centered with your character, Duncan, and Raymond. The rest is more of a “community” theme, showing a wide range of characters of wildly different backgrounds and viewpoints living in the same space, unlike Dragonfall‘s focus on anarchist characters and their own flavors of how they interpret and exercise it. Heoi, the Yellow Lotus city, is home to a clinically depressed drone salesman, an old doctor with a dark past that may be darker than you’re lead to believe, a dysfunctional family who run a club and sell drugs and guns on the side, three random old men who play Go on the docks in the middle of a criminal haven, and a hacker brat who constantly speaks in his own made up lingo. The comfort of the Kreuzbasar is replaced with Heoi’s chaotic yet welcoming wackiness, which simply hides a genuinely human soul at the center. The more you talk with the residents, the more you learn about them and their viewpoints. Reliable Matthew and Ten Armed Ambrose by themselves have two of the strongest stories of all three of Harebrained Schemes main Shadowrun games.

It’s the world of Hong Kong where the focus went, as the main story never quite reaches Dragonfall‘s highs. That doesn’t mean it’s bad by any means, it just lacks that strong structure and emotional bang at the finish. However, Hong Kong‘s villains are definitely far more menacing, especially the being causing the dream phenomenon, and the final fight in the main campaign leaves you with a real sense of accomplishment on par with Dragonfall‘s end. That epilogue campaign, however, purposefully mucks things up in an impactful way, coming at you hard and fast with one of the toughest choices in all three games (mind that your goal is the opposite of the other affected party, and it most likely will be). 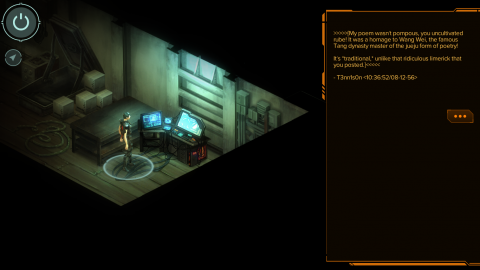 That epilogue campaign is also a real challenge for fans of the combat system, with stronger, smarter enemies in great numbers, especially on one of the side runs. On the down side, Hong Kong suffers from odd new problems, like insanely long load times about halfway in the game, script break bugs that could potentially lock you out of the steps to get the main campaign’s golden ending, and a slightly rushed epilogue ending. It does work in the final moment, but it feels like something was forgotten in the process. Still, it’s hard to complain too much when Hong Kong has so much more than the previous two games combined, not to mention the art style doing some fantastic work with the colors of yellow, orange and red. It really pops and gives a slightly more wild take on the cyberpunk aesthetics. The soundtrack also works in Chinese instruments into the usual style, and it works wonderfully. It gives Hong Kong a flair all its own, a standout from the other games in every way possible.

The matrix has also been completely revamped. Now it works as real time stealth with a variety of different designs depending on the system you’re entering. Battle only begins when you’re spotted, and every enemy type adds to the alarm meter in different quantities. The whole experience is simply more satisfying, even with the simplistic hacking minigame. It makes you feel like you’re actually hacking something, infiltrating complex systems and taking down firewalls to reach your goal. There’s even a new cyberware branch on the stat page, allowing you to build a character who gains abilities and skills similar to Dragonfall‘s Glory. It’s a new branch on the body tree, making that stat more enticing to pour into then it ever has before. 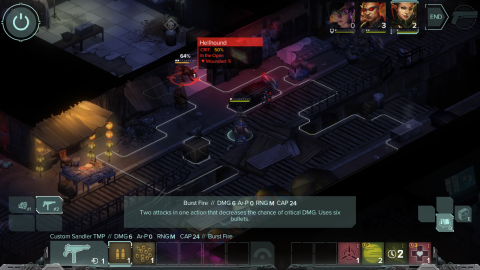 The game strains under its own complexity in ways beyond loading issues and code issues, like slowdown during a few large enemy count battles, but it continues to improve the series formula and create its own flavor of Shadowrun. It’s the most fun the series has been in the gaming realm, but with surprisingly relatable moments mixed in. It’s a high quality blockbuster that masterfully uses archetypes to create some of the most interesting characters in any RPG. It’s arguably the height of the video game arm of the franchise, and one has to wonder how the next mainline RPG title will improve on this strong formula.