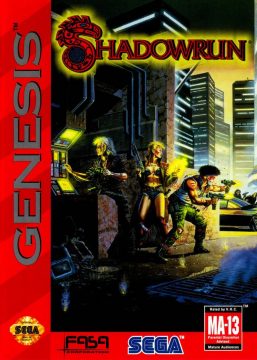 Shadowrun on the Genesis was developed by Blue Sky Software, who also did the 16-bit Jurassic Park games for Sega, along with the Vectorman series. It’s a very different game, but the setting and mood are still pretty much the same. The hero this time is a young man named Joshua. Before the game begins, his character class is chosen from three different options. Samurai are most suited for combat, Deckers are the best for jacking in the Matrix, and Shamans are the best magicians.

After selecting the class, the opening cinematic details the story of Joshua’s brother, who was a Shadowrunner. He went on a mission with some of his fellow buddies, but they were ambushed and killed. One of his mates had a cyber eye, and the eye captured a video of the whole massacre. With this as the only clue, Joshua must investigate his brother’s death and take revenge. 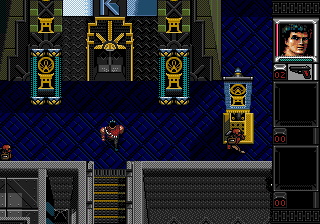 Arriving in Seattle, he discovers the hotel where his brother was staying, but the skeezy owner demands some cash before he can claim it. And so begins Joshua’s career in shadowrunning, as he begins running quick missions for the local “Mr. Johnsons,” shady crooks who need someone to do their dirty (and occasionally not so dirty) business. Sometimes this means playing delivery boy, running packages from one place to another. Other times people need to be escorted. Joshua can also hang out at abandoned buildings and kill some ghouls, or hunt down troublesome gang members. These missions are all randomized, so they can be repeated over and over to get different variations. Successfully completing missions earns cash, along with karma, which can once again be used to upgrade numerous statistics.

The Genesis Shadowrun is pretty open ended, almost overwhelmingly so. Joshua is constantly told the names of different locations without having any clue where they actually are. This is a game where that really demands sitting down and explore to get into it. Once gotten past the first few steps of the game, the whole city of Seattle is open to the player, and most of it can be easily accessed via taxi, summoned at any number of computer terminals. It’s then possible to begin one of three different plots and progress through them in any order, even switching in between them. When all of them are completed, Joshua eventually proceeds to the final steps of the story, although there are tons of different sub quests to run. Most of the game involves running around, talking to new people, and getting contacts. Although it’s not possible to interrogate people like in the SNES Shadowrun, different responses when talking to people are available, and there’s more dialogue overall, all of which is very well written. The story isn’t remotely as involving – or as good – as the SNES game, but it’s passable. It also doesn’t suffer from Nintendo censorship – the hospitals are still referred to as “chop shops” here. 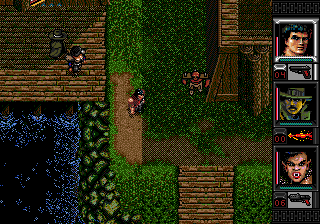 There’s a lot of customization to be found in this Shadowrun, with twenty different skills to upgrade, like firearm proficiency, computer skills and endurance. Unfortunately, much of this is restricted by the class chosen at the beginning. Although there’s nothing stopping Joshua from getting Cyberware as a shaman, his Essence will decrease, weakening his magic casting. All classes have Essence, but only shamans need it.

The combat is pretty simple, and everything takes place in real time. Joshua aims automatically at enemies, and the player just has to push the button to fire. After an attack, there are a few seconds of cooldown time. Joshua has two health bars – one for physical and the other for mental health. If one of them runs out, he’ll black out and end up in the hospital. Thankfully, the only penalties are a loss of 10% of cash (much nicer than the 50% of Dragon Quest games) and any hired mercenaries. 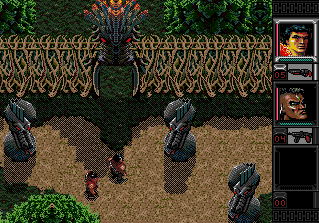 But just because it’s simplistic doesn’t mean it’s easy. Even with a maxed out character with all the best weapons, Joshua will get his ass kicked regularly. Luckily, he can hire some Shadowrunners for protection, and it’s even possible to switch to controlling them with the B button. They are most useful for complementing Jake’s class, so he can choose to be a Samurai and just contract Deckers or Shamans to help out, for example. Shadowrunners can be hired just for one single run, or as life long partners. Naturally, the one-time run is much cheaper. After getting shot with Shadowrunners in the party, or abandoning them in the dust when they are down, they will be quite grumpy in the next meeting and ask for higher pay.

Matrix running is much more integrated here than in the SNES game. Not only are these sequences a big element in many of the missions, but it’s also possible to sneak in at any time to steal data files and sell them on the streets for extra cash. Once Joshua gets a datajack (or hires someone who has one), he can plug into any terminal and hack into it, allowing him to access the databases of the huge corporations. While cruising through through the maze-like nodes of cyberspace, the decker will run into various defense programs called ICs, whose job it is to terminate pesky hackers. In order to combat them, there is a variety of offensive and defensive computer software available. Since a maximum of five can be loaded at the same time, and each has different success rates depending on the IC being fought, choosing the right software is critical for victory. Some ICs can even attack the decker physically and destroy the datajack. These scenes look a lot like the battle scenes from Phantasy Star 2, complete with the blue grid. However, only a single character is controlled in the fight, with the avatar bearing a suspicious resemblance to the Silver Surfer.

Although there is not much interaction with the game environment, the whole world feels remarkably alive. In some districts of Seattle, there are gangs who constantly stalk Joshua and try to smash in his face in. If to get them off his back, he has to go to their base and cough up some money to ask for safety. Unfortunately, this only lessens the frequency of random attacks, and he’ll still be assaulted. This can quickly become a problem early on, because buildings cannot be entered when under attack, and thus the only options are to run away (which is nigh impossible) or to try and kill the attackers. 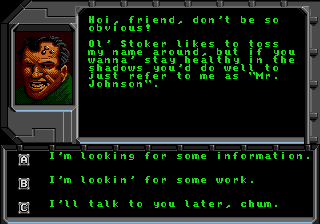 There are other random events, as well. When walking around in some district, a screen will pop up describing some event – civilians under attack, usually – giving three different choices on how to react. These usually include the choice to open fire, to step in and interject, or just walk away quietly. Choosing wisely might bring in some extra cash – while a poor choice can result in death. Other times, smugglers offer illegal grenades. This can mean a great deal to get them cheaply, but other times a Lone Star (equivalent of a police in Shadowrun) officer will reveal himself and take Joshua to the headquarters, where he has to pay hefty fines.

The SNES Shadowrun had some dark visuals, but it’s nothing compared to the dank and decrepit world on the Genesis. The lower color palette actually works to its favor and adds to the creepy atmosphere, even if the visuals are technically rather unimpressive. The music is also largely forgettable, although some themes are particularly creepy, especially the humming in the Matrix sequences. 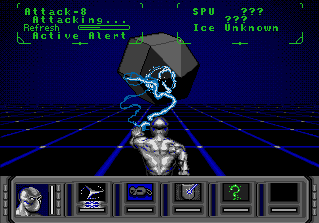 Although it can get overwhelming at the beginning, the Genesis rendition of Shadowrun remains much truer to the pen-and-paper gaming rules, and is definitely worth it for those who like a lot of freedom in their RPGs.