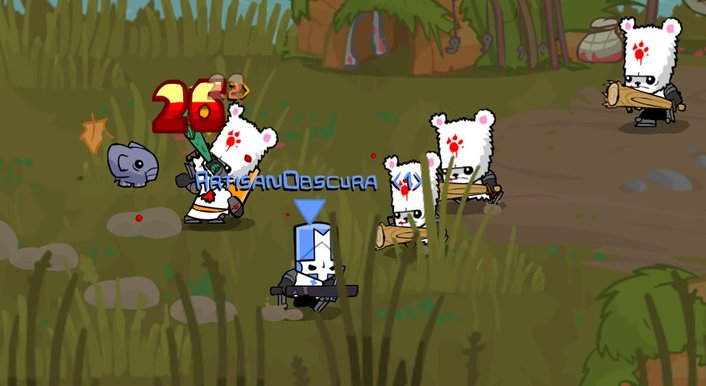 Born out the popular Flash website Newgrounds, indie developer The Behemoth released Alien Hominid, an homage to arcade run-and-guns like Metal Slug. While finding modest success, their next game would take on a different classic genre: the beat-em-up. Initially titled “Ye Olde Sidescroller”, it was eventually re-titled Castle Crashers, and released in 2008 for Xbox Live Arcade to great acclaim.

The plot involves up to four gallant knights (or whatever the players choose to play as) rescuing four princesses and a power crystal from an evil wizard and all of his cohorts. Players initially start out with these four knights (though there are bonus characters at the start if you own any of The Behemoth’s other games), with their colors relating to elemental affinities:  orange (fire), red (electricity), blue (ice), and green (poison). However, more characters can be unlocked through either playing minigames or buying downloadable content.  The levels can be selected via a Super Mario World-type map screen, and although you might occasionally be diverted off the path to get a necessary item, progress is generally linear. 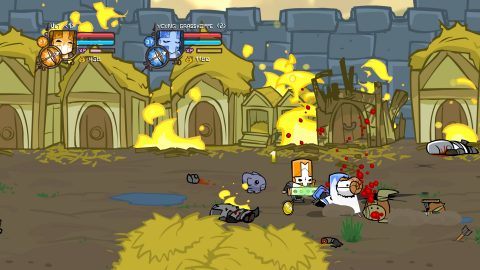 Though the game starts off in a fairly standard Dung Age medieval setting, fighting orcs through forests or wandering through rival kingdoms, it doesn’t really adhere too closely this and generally prefers to go off in all sorts of silly directions. In one early, you ride on a deer, running through the forest and evading obstacles, until the threat of an impending giant causes the poor creature to perpetually crap itself in fear, propelling you forward with the force of diarrhea. (This kind of humor should be expected from Newgrounds, which reveled in this sort of stuff.) It’s not all juvenile though, as there are other cleverly weird bits, like when your soldiers take a break from smashing up enemies and instead challenge them to a game of volleyball. Other encounters include a trek through a UFO to fight the aliens from Alien Hominid, along with a boss that paints poorly-drawn renditions of other Newgrounds characters. Additionally, bosses hold a kidnapped princess. After taking down the bad guy, the players might fight each other to win the kiss of the fair maiden. It’s kind of dumb to present the only female characters in the game as literal trophies, but to be fair, is a trope consistent with earlier beat-em-ups.

The beat-em-up action takes particular inspiration from River City Ransom and Guardian Heroes. Players move along a belt scrolling path and are given two attack buttons for fast and heavy attacks, as well as a button for blocking with their shield. Each character has a default weapon, but players can pick up dropped weapons or buy new ones with gold dropped throughout the level. Each weapon has its own properties, plus each player has their own stats regarding power, health, speed, and magic. Defeating enemies gives experience points, and players can use these to level up their stats as their discretion. Additionally, there are orb-shaped creatures patterned after various animals, which act as sort of a familiar. When equipped, some of them attack enemies for you, while others provide various buffs or abilities, like making enemies drop more gold or increasing one of your stats. 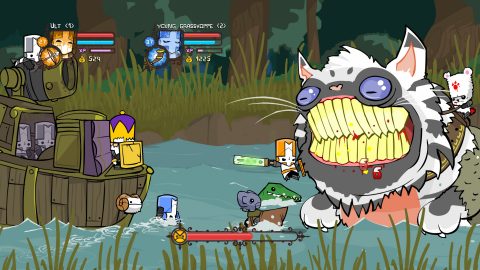 Players can also cast magic spells, regulated via a magic meter. At the beginning these are just close range magic blasts, but as you build levels, you can launch long-range projectiles and anti-air attacks. There are also secondary items like bombs, bows and arrows, healing potions, and a sandwich which beefs up the player for a short amount of time.

One of the main draws of Castle Crashers, as with arcade beat-em-ups like Konami’s Teenage Mutant Ninja Turtles games, is the four player cooperative multiplayer, featured both online and locally. There are no quarters or credits, so everyone dying usually just requires that you restart the stages. It also presents a different solution if one of the players is killed. Any of the living characters can walk up to their comrade and essentially give them CPR, in tune with rhythmic button presses. If timed properly, they can be revived with full health and brought back into play, with no real penalty. It keeps the game moving and ensures that no one has to sit out and watch everyone else have fun, and this mechanic was even copied in some beat-em-ups that came after this game. 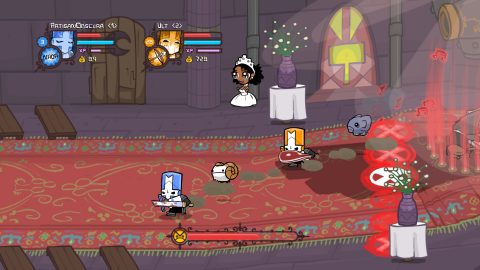 Despite being a homage to several arcade beat-em-ups, Castle Crashers heavily deviates from them as far as feel and balance are concerned. Even at the lowest speed stat, the characters trot along faster than an average beat-em-up hero. Plus, owning to the super deformed nature of the characters, the proportions and speed feel a bit different (you can slash your weapon without stopping, for example), and the enemies tend to flood the screen more densely than most 90s arcade games could ever allow.

The main reason for the stat upgrade system and other RPG elements is to provide some depth and longevity. The downside of this type of system is that it can leave you underpowered, especially since the game seems balanced for multiplayer. This leads to times in single player mode where bosses take forever to kill, unless you’re significantly leveled up, which encourages going back to previous levels and grinding for experience. Additionally, a player who is a really high level may get stuck with a player of a lower level or vice versa, and the one with the lower level will usually be the dead weight on most of the later levels. 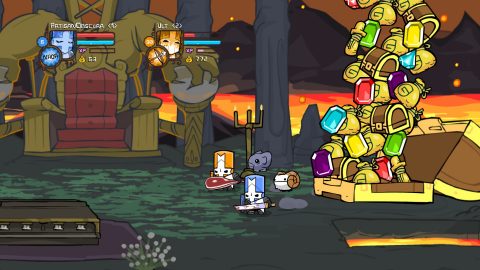 Players can also compete in arenas facing off against waves of enemies, and these provide rewards like unlocking an enemy character to play as. There’s also the “All you can quaff” mode, which is a mini-game where the players must shovel as much food as they can before time runs out. However, this was replaced with the “Back off Barbarian” minigame in the Xbox One/Steam remastered version.

In terms of art style, the game has a similar look to Alien Hominid and many of the Flash games on Newgrounds in general, with bright colors, thick outlines, cartoonish proportions, and comical expressions for many of the characters and enemies. It’s well animated too, disproving a long-standing perception of Flash games. The music was not created by one composer, but rather consisted of various songs taken with permission from the Newgrounds community. Some are dramatic orchestrations, some of upbeat electronica, while desert levels usually have a sitar playing. Whatever the case, The Behemoth made great choices when selecting the soundtrack. 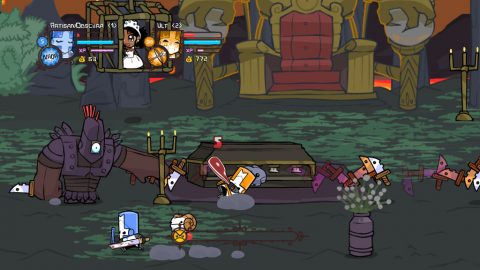 Castle Crashers was released just as the Xbox Live Arcade was coming into its own, and found substantial success, especially considering the beat-em-up genre had long been considered dead. It also had the effect of reviving this style of game, allowing the release of similar games like Scott Pilgrim vs. The World and Phantom Breaker: Battlegrounds. Even other games that are less directly inspired by it, like Double Dragon Neon and Charlie Danger, own their existence to the success of Castle Crashers. For better or worse, all of these games also feature similar RPG stat building systems, which make it more attractive for replay purposes but simultaneously causes issues with the game balance.

After its initial release, the game found wider popularity on the PlayStation 3 in 2010, then later on Steam in 2012. These ports aren’t really changed from the original, though they do offer the downloadable characters for the Xbox 360 version already included. Eventually, it was also remastered for Xbox One in 2015 along with an update for the Steam version, with a few changes taking place in it as well, such as increasing the texture resolution and bringing the game speed to 60 FPS. Whatever the platform, Castle Crashers provides a welcome modern take on a classic genre. It has some rough edges, and the humor may be off-putting at spots, but it’s still a heck of a lot of fun, especially in multiplayer.