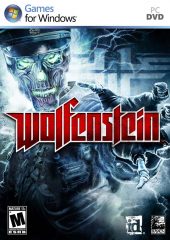 Around 2005, id Software announced that it was working on a sequel to Return to Castle Wolfenstein, which would be developed specifically for next-generation consoles. More details were revealed closer to launch, such as that the game would be developed by Raven Software, who had developed quite a relationship with id Software over the past 15 years. 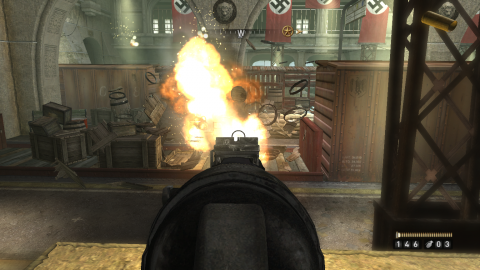 The ultimate result is 2009’s Wolfenstein – what it lacks in a subtitle, it more than makes up for with its epic vision of World War II about to go horribly wrong (worse than usual). Taking place some time after Return to Castle Wolfenstein, this new entry begins just as Agent Blazkowicz is on his way off of the German battleship, Tirpitz, with the Nazis’ latest occult technology, known as the Thule Medallion. The medallion is said to grant special dimensional-shifting powers to whoever holds it, and it can be made more powerful with the addition of special “Nachtsonne Crystals” which grant additional abilities like slowing down time, creating impenetrable barriers, and adding insane power to firearms, enabling them to shoot through walls. 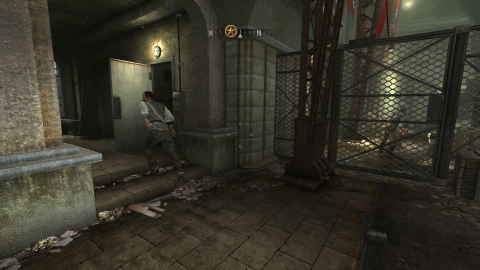 When the game proper begins, BJ is on his way in to the small German village of Isenstadt, where the Kreisau Circle resistance group is desperately trying to boot the Nazis out of their town, and losing badly at it. Things take a turn for the bizarre when the resistance carries out a mission to bomb a train loaded with what they believe to be weapons and ammunition. In reality, the train contains hundreds of barrels of Veil Energy, and the resulting explosion almost literally turns the trainyard upside down. The fallout from the blast causes everything – from random debris, dropped weapons, enemies, even you – to slowly float towards the ceiling for short bursts of time. It isn’t until you take your next mission at the dig site that you realize what these barrels are for: providing energy to be used with the Thule Medallion. And, as it turns out, there’s more than one of the thing. 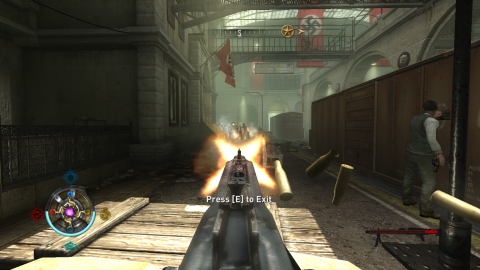 The Thule Medallion is Wolfenstein‘s major gameplay gimmick. When you first get the medallion, its only ability is Veil, which is an alternate vision mode that highlights enemies, explosive barrels, and the trajectory of your thrown grenades, but also has side-effects like making you run slightly faster, and revealing hidden doorways that can only be traversed while in Veil mode. Veil mode also reveals the presence of otherworldly creatures called Geists, which generally float about and act like balloons, until you shoot them. Geists will detonate in bursts of lightning that can kill nearby enemies if you shoot them, but you must be careful not to do this too often, because the Geists will turn hostile if provoked. And you’re not the only person with a Thule Medallion, either, as you’ll encounter Veil Priests who can use their own Medallions to run extremely fast, shoot energy bolts at you, and render themselves (and every other soldier around them) invincible. They are highly irritating, but can result in some pretty thrilling fights in some places, once you’ve unlocked the other abilities that allow you to counteract the Priests’. 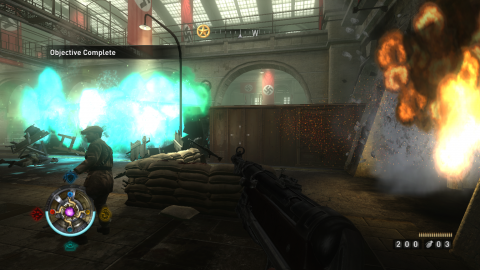 As you progress through the game, you will obtain three other Nachtsonne crystals to use on your medallion: Shield, Empower, and my favorite, Mire, which slows time by half, allowing you to dodge gunfire and quickly dash between covers without getting shot too much. With purchased upgrades from the Black Market, Mire will generate a huge burst of energy from you when it’s activated, turning nearby Nazis into ash and breaking anything fragile in the area, and another upgrade will prevent Mire from slowing you down as well, enabling you to act at normal speed while everything else is moving at snail’s pace. Most of these upgrades can only be purchased after you’ve found enough Tomes of Power, an item that pays tribute to Raven’s first FPS game, Heretic. 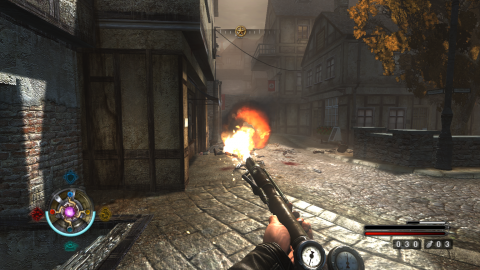 The level structure of Wolfenstein isn’t strictly linear like its predecessors; in fact, it’s most comparable to a hub in Hexen. The majority of the game centers around the Midtown and Downtown districts of Isenstadt, with the main mission areas being accessible from various parts of the town. Each mission area is typically pretty linear, but the town itself is quite open-ended and even becomes more accessible with the use of Veil mode. The town doesn’t stay the same between missions, though. The more missions you complete, the more different types of enemy resistance you’ll have to fight as you navigate the city streets, eventually even including the dreaded Veil Assassins, Priests, and jetpack troopers.

Wolfenstein borrows a number of gameplay elements from more modern FPS titles like Call of Duty: World at War, such as a Sprint button, regenerating health, and a separate grenade button. One thing it does not borrow, however, is a limit on weapon slots. You can carry every weapon in the game, all at once, and some missions exist solely to give you these new weapons at crucial moments. There are typical World War II staples such as the Mauser Karabiner 98K and the MP-40, but also all-new tools of destruction such as the Particle Cannon, the Leichenfaust 44, and the fan-favorite Tesla gun, which will blast enemies quite a distance away when fully charged. Every weapon can be upgraded numerous times by spending gold (found in secrets and earned for completing missions) at the Black Market in town, and even the ordinary weapons get new, retro-futuristic upgrades like tactical scopes, drum magazines, silencers, lock-on targeting mechanisms, and stun-gun prongs for enhanced melee attacks. The upgrades make a great reason to hunt for secrets in the mission levels, as most secrets have gold hidden in them. Even the Midtown and Downtown hubs have clever secrets hidden about, like ladders that only appear when in Veil mode, walls that break away, and chests hidden under piles of breakable wooden pallets. 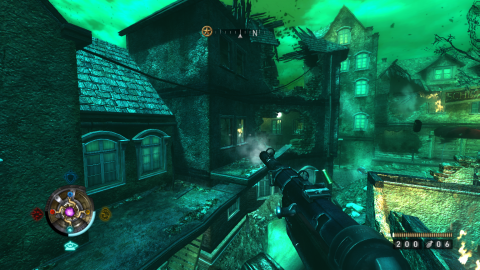 About a third of the way through the game is when things start to get really serious, not just in gameplay terms, but in story as well. This is when you start getting the crazier weapons like the particle cannon, and also when you meet Hans Grosse, who is a giant of a man, even outside of his Wolf3D-throwback armored battle suit. You first find him in the middle of a bar fight with a Kreisau operative. He even greets his opponent with a menacing “Guten tag!” like in the game from which he originated. Die-hard Wolfenstein fans might bemoan the continued lack of Hitler in the series since Return to Castle Wolfenstein, but Hans’ appearance in this game more than makes up for it. The final battle against him, with his own fully-powered Thule Medallion, is seriously intense, even despite being a Nintendo-ish gimmick fight about half the time. 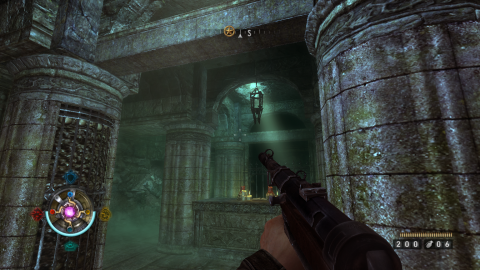 Therein lies the most serious issue with Wolfenstein: boss fights. Where previous entries of the series had you fighting bosses with pure firepower, this game renders your weapons almost entirely useless against certain enemies unless you do some gimmick first, such as leading a charging monstrosity into destroying pillars, or forcing a Veil-powered foe into recharging his energy so that you can destroy the charging stations. The most irritating of these fights is against the Queen Geist, late in the game, which effectively turns the game into a turret sequence for most of the fight. Even outside of boss fights, there are the Particle Cannon troops, who are heavily armored and do not take damage from most weapons, so you have to aim precisely and shoot the Veil capacitors on their backpacks until they self-destruct, or else use your valuable rockets and other high-powered weapons. Don’t get me wrong, I do appreciate some variety in enemies outside of the generic MP-40-wielding Nazi soldiers, but sometimes these more powerful enemies get massively frustrating. 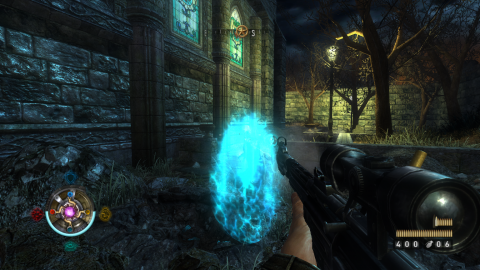 Like the previous entries in the series, Wolfenstein was Indexed by Germany’s BPjM, but also “confiscated” under Germany Criminal Code section 131, or “Excess Violence,” again making it unlawful to sell. The “Excess” they speak of is quite evident once you start upgrading your bullet weapons and grenades. Much like in Raven’s earlier Soldier of Fortune series, enemies can be decapitated, dismembered, and even have their throats shot or stabbed open. They’ll even fall apart like an Incredible Crash Dummies action figure if you use an Empowered weapon. Simply put, this game is really, really bloody. 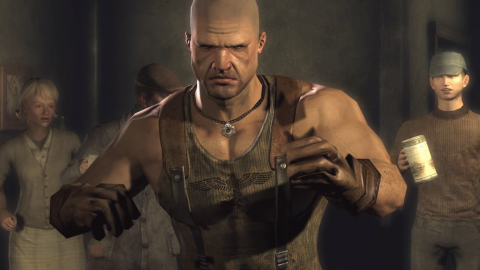 All that blood has to look good, though, and Wolfenstein‘s visuals in all respects are no slouch, as the game is powered by a highly advanced and upgraded version of id Tech 4, the engine that powered Doom 3. The engine upgrades allow for much nicer graphical effects, larger maps, and outdoor areas, which the engine was originally not equipped to render more than a small area. The visual effects for the Veil powers are really awesome, even if it tends to lag a bit on the console versions. 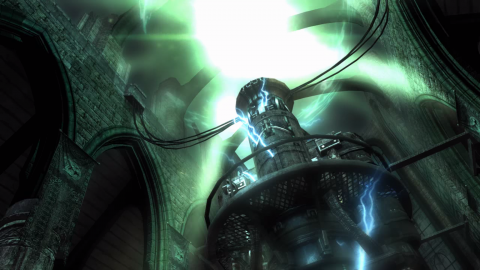 Speaking of the console versions, Wolfenstein was ported for the Xbox 360 and PlayStation 3. Both versions look and handle about the same as the PC version, but there are two concessions given to the console players. The first is a nice “weapon wheel” selection system, where holding the right shoulder button pauses the game and shows you all of your weapons in an easy-to-use wheel. You can also press a button to assign your “favorite” weapon, where tapping the shoulder button will quickly toggle between your favorite weapon and the last weapon you had selected before that. The other concession is that, if you’ve purchased and completed the downloadable port of Wolfenstein 3D, you earn bonus gold at the start of the main game, and bonus goodies in multiplayer. 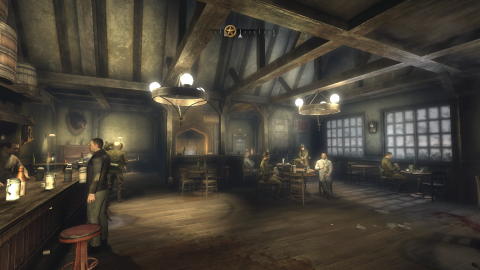 Which brings us to multiplayer. The online portion of the game was developed by Endrant Studios. On the surface, the same objective-based gameplay of RTCW and Enemy Territory is in place, but it is vastly changed, and unarguably for the worse. All players get Veil powers specific to their class such as healing auras, and killing enemies rewards players with gold which can be spent on upgrades. But rather than these upgrades being minor gameplay alterations and visual changes a la Call of Duty: Modern Warfare 2 (which came out around the same time), they can seriously unbalance the game. Multiplayer was so poorly received by players and press alike that Activision fired Endrant Studios on the very day that the game was released to stores, practically ensuring that the game will never be improved. 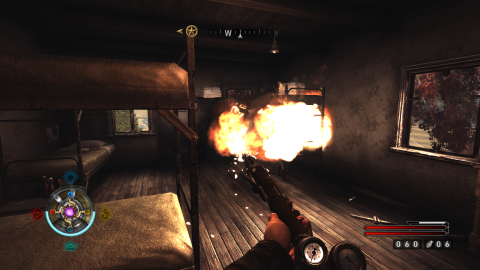 Overall, though, Wolfenstein is not a very bad game at all. Even despite the horrible multiplayer, and the frustrating bosses in single-player, this game is every bit a worthy successor to RTCW. Sadly, due to complications from Wolfenstein‘s rights transferral to Bethesda, Wolfenstein wound up being delisted from Steam, and it is unclear if it will ever return, meaning it is currently only possible to obtain the game second-hand, unlike nearly every other entry in the series.