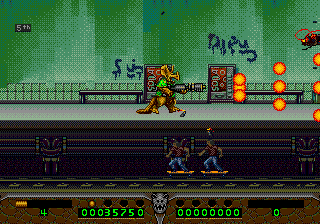 Video game adaptations of comic books have been a staple since the inception of games, and will continue so as long both mediums do. It benefits comic creators who can license content to third parties thereby keeping the comics funded; it’s good for developers who can tap into pre-existing material and their subsequent markets; while players can enjoy a deeper experience within their favorite narratives, and can generally know what to expect. Tom Mason’s Dinosaurs for Hire (hereafter DFH) is one such crossover, though given its comparative obscurity it’s perhaps a little surprising.

The DFH comic debuted in 1988 as a black and white series by Eternity Comics; there were only 9 issues. It was relaunched in 1993, in colour, under Malibu Comics – the publisher’s portfolio is huge, but it dabbled in videogame crossovers with Mortal Kombat comics, and the short-lived Street Fighter comic. For a time Malibu even had a game development subsidiary, Malibu Interactive, which produced a diverse selection of licensed games. When DFHrelaunched, creator Tom Mason noted in the debut issue (twice) that 20th Century Fox had signed the option to develop a cartoon show, penned by X-Men co-creator Len Wein, while Sega would be developing and bringing out a Genesis game in the summer. Marvel bought out Malibu in 1993, the DFH revamp lasted for 12 issues before cancellation, and only the Genesis game made it out. It’s a shame because for an American publication the comic was quite brilliant, extremely risqué, and full of tongue-in-cheek bite, putting it closer to the UK’s 2000AD. The relaunch issue’s cover proudly declares “Politically incorrect action on every page!” and it does not disappoint! The opening page of issue #1 is pure gold, with topless woman in latex thong and caption stating you won’t find that in Marvel comics. Subsequent pages mock Stan Lee, Donald Trump, Marvel, DC Comics, X-Men, Ren & Stimpy, Ninja Turtles, and even DFH itself. 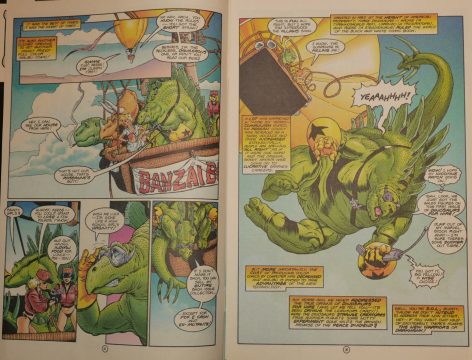 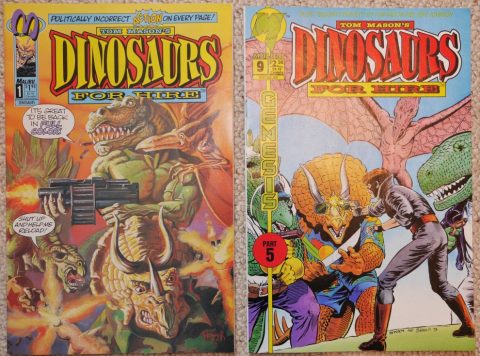 DFH the game is a 2D action-side scroller allowing for two players simultaneously, similar to Gunstar Heroes or Contra Hard Corps; players choose from three different characters, and then stomp through the levels blasting at enemies or using melee attacks when up close. Much like the comic it’s full of acerbic wit, irreverence, and 4th wall breaking jokes. The opening is actually a fake-out, dropping you right into a battle against the Stage 5 boss: an enormous dam-scaling reptilian monster. He’s super easy and after dropping him the credits roll, whereupon the group’s Pterodactyl colleague Cyrano appears and explains that your Genesis’ Blast Processing Unit has glitched, and only now is the proper game about to start. This is actually ingenious since the true first level is a rather dull city slum, whereas the fake-out is sure to hook any player booting it up in a shop or round a friend’s house. And that actually encapsulates the entire subsequent game: explosive first impressions, great ideas, but never quite as excellent as it promises. 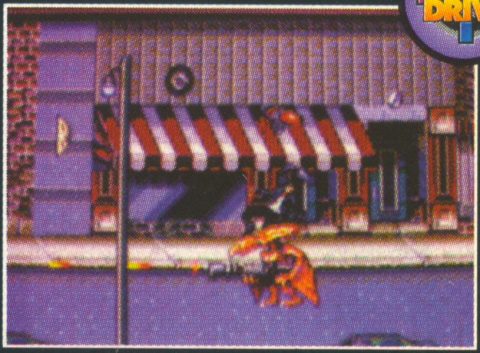 A playable Cyrano in a beta version

Take the three selectable characters for instance: Archie the T-Rex, Lorenzo the Triceratops, and Reese the Stegosaurus. They each have different sprites, melee animations, character bios (extremely long bios!), even different status bars at the bottom of the screen, but they all handle exactly the same. There does not seem to be any perceptible difference in the way the dinosaurs control or behave. You’re unable to change characters after losing all your lives and continuing, but it doesn’t really matter. Cyrano the Pterodactyl was originally also meant to be playable, based on beta screens, but his omission is no great loss given the identical nature of the remaining three. The same problem applies to the weapons, or lack thereof. Starting with a single small blaster, this can be upgraded to a double and then triple spread-shot, while also upgrading its size/strength. HEX-editing the game reveals that each of the three spread-shot levels can be upgraded up to five times (so six strengths), but given the likelihood of dying and having this reset, most players will never see the tangerine-firing maximum level. You basically just have the one weapon, regardless of which character you choose, which comes in 18 slightly different power variations. For a laugh, try HEX-editing the power value to (30007151 0009) and see what your guns end up expelling.

In its defense the game looks and sounds great, as you would expect being developed by Sega itself – if anyone knows the Mega Drive / Genesis hardware, it’s the company which made it. There’s multiple layers of parallax scrolling, screen-filling bosses, plenty of sprites onscreen, and expert pixel dithering to give the impression of a larger colour palette. Zoom the screenshots in to see just how much effort they put into the colours – it’s truly gorgeous. Special mention must also go to the last boss, with its neon-green tentacles, which is something right out of the Treasure playbook. Sadly the gameplay doesn’t quite match the pretty pixels and surging synth sounds. Overall the mechanics are too simple, never reaching the depth or sheer fun of Gunstar Heroes or the later released Contra Hard Corps on Genesis. It’s a fun game, but not an amazing one despite the potential to be so. This failure to capitalise is surprising, since there’s quite a few good ideas throughout. There’s the aforementioned fake-out opening, and also a later level taking place on a film-set, amidst miniaturised cityscape with small tanks and planes attacking. The dinosaurs appear like monsters from a Japanese kaiju film such as Godzilla, and it all plays into the game’s satirical edge. Plus there’s some amusing death animations, such as watching your dinosaur sink into lava while holding his gun aloft, or watching him get dismembered when touching a turbine. And yet… there’s just not enough of this, compounded by the identikit characters and single weapon system.

It’s difficult to ascertain precisely why DFH fell short of becoming a timeless classic. There are however two major clues. Firstly, in the October 1993 Club Malibu newsletter, it states the game went back into development to make it a guarantee must buy. The wording conveys this as a positive, but it’s interesting to consider what the earlier version must have been like to mandate extra work. Perhaps even a few more months would have helped diversify the mechanics a bit more. The other major clue is the credits. Notice how there are no designers listed. Tom Mason is listed as creator, but this could refer to his creation of the series’ source material; the closest the game comes to actual game designers is the producer, Stewart Kosoy, and the manager, Mark Nausha. Conversely there are no fewer than seven programmers and six artists credited. Ultimately that’s what the game feels like to play – good graphics, good sounds, technologically very competent, but slightly anemic in terms of gameplay. There’s also some strange design choices, notably with how the continue system works for two players: they share the supply, but both players need to die before the one can continue, after which both are booted to the start of the level. 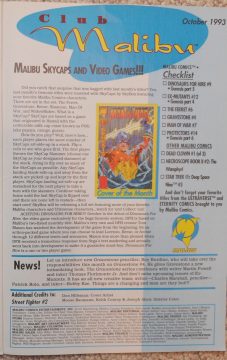 The game went back into development?

Tom Mason explained via email: “Malibu’s co-President at the time was Bob Jacob. He had a company called Acme Interactive that he merged with Malibu Comics – that’s where Malibu Interactive came from. So he had been doing a lot of work-for-hire games for years and he knew all the players in the game industry at the time. Sega had licensed Dinosaurs For Hire from me through Malibu to make the game. I don’t remember who approached who. The development was done by a studio that was affiliated with Sega that was located in Diamond Bar, California. I don’t remember their name, but they weren’t owned by Malibu. My role in the game was to meet with the game designers early on, give them a bunch of advice and note and stuff and to answer their questions on a consulting basis. I’m not a game designer, and I was already busy with a full-time job on staff at Malibu Comics, so there wasn’t time to devote to anything else. So, no, I left the actual game design to the people who actually knew what they were doing.”

It’s still a fun game, and you’ll have a blast going through it on your first go, especially with a second player. But it doesn’t quite warrant repeat playthroughs like other games on the system. It feels like a game which wanted a bigger, expanded sequel – or a modern update. Unfortunately nothing has been done with the source material in over 20 years. However, in May 2016, as part of initial emails regarding Malibu’s Street Fighter comic, Tom Mason announced he was reviving the IP and was also working on a new, top-secret project. The adventures of Archie, Lorenzo, Reese, and Cyrano have a lot of potential, and it will be interesting to see what happens.

The Commodore CDTV was a short-lived and ill-fated attempt by Commodore to enter the multimedia market. Typical for all early CD formats, no one quite knew how to make best use of the new medium. Someone thought comic books with voice overs would be successful, and so several issues of the original monochrome DFH series were converted, albeit with crude computer colorization added. Developed by Wright Works III, online release dates vary – the earliest being 1991. As you’d expect, an expensive piece of CD software was never going trump the affordability of a $2 comic. Thankfully today someone has captured it for YouTube. 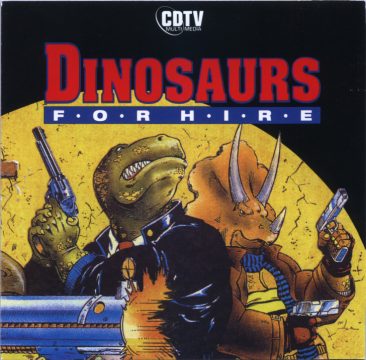