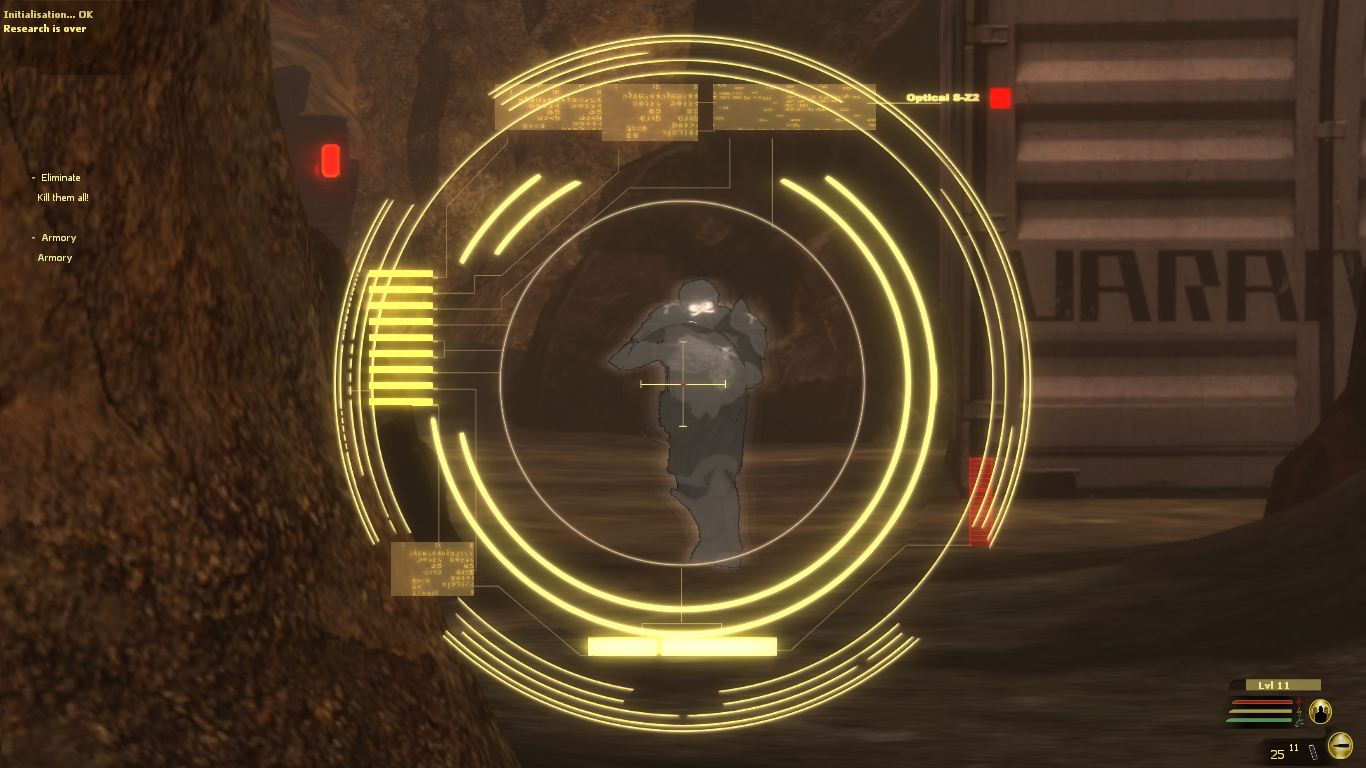 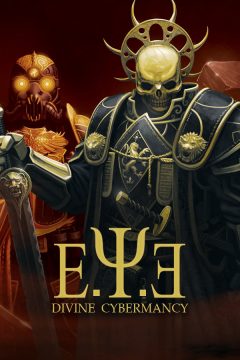 On the outer edges of the gaming world, there are a few games beloved for just how strange, obtuse, or bizarrely brilliant they are. From the politically charged absurdity of Killer7 and The 25th Ward to the purposefully un-fun and poignant Pathologic, some janky or oddly designed games out there manage to gain a following and appreciation for their very different goals compared to the main market. This is one of those games, but that is only half of its equation. It has a fascinating story that could only be told in this medium, yes, but it also includes content like a power that lets you teleport into people to make them blow up and a low-life ravanger calling you up to inform you that now that the power is back on, they can go back to torturing the survivors and then proceeds to tell his “bro” to get the electrodes for the genitals ready. 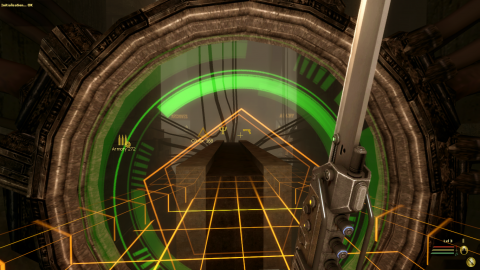 E.Y.E: Divine Cybermancy is a one of a kind piece of madness, an eldritch tome in the form of a semi-immersive sim action-RPG that has about twenty-thousand unique features that make very little sense and about a quarter of them are just straight up trolling. For example, you can overdose on med-serum, your main method of healing besides pressing the maintenance button until the game says your legs are OK. The first full map has an entire alternate route with no combat encounters, but also no other content while being much, much longer and gets you nothing for the trouble of taking it. Planning to wear anything heavier than light armor? Joke’s on you, all the maps are huge and you’re a lumbering cyborg tank man! Oh, and don’t die too much, sometimes you’ll get fatal wounds that give you permanent stat debuffs that stack overtime and can’t be removed without extremely expensive and time consuming researched locked behind RNG! 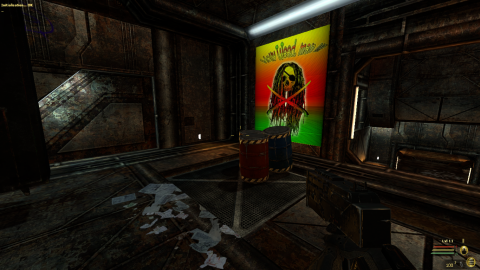 The basic idea here is that you’re a member of the organization E.Ψ.Ǝ, the military faction of the Secreta Sectorum, who safeguard humanity in a post-space colonization time that is also a dystopia due to space demons. Your major enemies are the fascist human government called the Federation and the beats of the Meta-Streumic Force, a type of horrible space corruption magic your side can also make use of. You awake in a strange green wasteland with a massive glowing gate, and see the body of your mentor, saying you know you are your mentor’s killer, yet also are not. 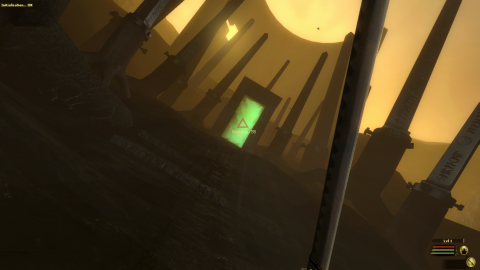 Go through the gate, and you discover you were knocked out on a mission are missing some info. You get a message from yourself from your flying little drone that seems to be made of a person’s skull, and figure out that you’re in the middle of a spat between the Culter Dei, your faction, and the Jian Shang Di. Your commander wants to wipe out the Jian Shang Di and justify it with some black-ops missions, and your mentor wants to try and makes peace to deal with the real threats, and you…just kind of go along with the commander’s plans, even when you voice discontent.

If half of all that sounded suspiciously like Warhammer 40k lore, you’re not wrong. Streum On Studio went on to make a 40k game, so there was definitely clear influence they even admit to. They also just kind of took stuff from other popular things to fill out the enemy roster, including the Federation soldiers being the Helghast from KillZone and the massive Deus Ex enemy looking suspiciously like a Cyberdemon from DOOM. Surprisingly, this is not a janky copyright ignoring Russian game, but a janky copyright ignoring French game, even more surprising when you start reading literally any text or dialog in the game. 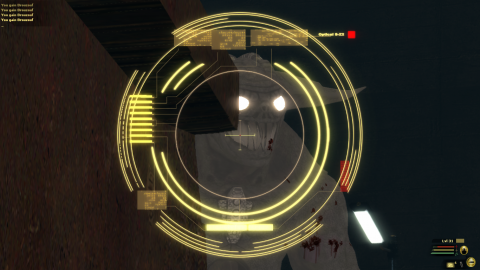 E.Y.E was made by a very small handful of people, which would explain why the translation makes actually following the story or understanding the basic setting context difficult. You need to pay attention, or you will be very confused very quickly due to awkward sentence structure, strange word choices, and a tone best described by pointing out an actual dialog option is proclaiming “rock ‘n’ roll, baby!” On the other hand, the translation is so bad that it becomes transcendent. Unclear if it’s accurate to the original script to have an NPC say “I’m composing a pure gangsta melody” or let you reply to someone by threatening to wear their face like a “moron party mask,” but it is appreciated either way.

The gameplay itself has a similar issue, where the learning curve is less a curve and more a brick wall that also occasionally forms a concrete fist that it slams into your face. Character creation alone is extremely confusing, as you have to pick three of a pool of different random stat bonus genes to decide your starting stats. You can also just select “METASTREUM” three times because it gives bonuses in everything and no penalties, then you just re-roll until satisfied. This is a great example of the baffling design decisions to come. 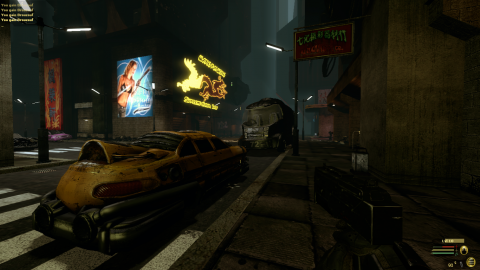 Don’t reload ammo until your clip is nearly empty or out, because unlike most every other video game made in the past two decades, doing so here reloads it like an actual clip-based gun instead of just topping your clip from a larger ammo pool. The best starting melee weapon, the Damocles, makes all the others pointless because it can make most every single low level enemy blow up. Your starting sniper rifle has a clip of 25 bullets and still kills most enemies in the game with a single headshot. Starting SMG doesn’t so much as shoot bullets as rain them sideways in a storm of death. One of the first magic powers you can purchase is that teleporting into people to make them explode spell from the intro paragraph.

E.Y.E: Divine Cybermancy is balanced, but not like a normal game. You have absurdly powerful tools and skills from the word go, and you can even assign hotkeys for everything to make you an efficient death machine if a power wheel isn’t fast enough for you. Balancing is instead made by smashing your head against huge difficulty spikes, like that aforementioned Deus Ex monster coming at you with an entire army’s worth of homing missiles and near invulnerability. Demons also swarm you like the Zerg and can cause madness or paranoia, which makes you lose control of basic actions because the devs thought it would be funny. 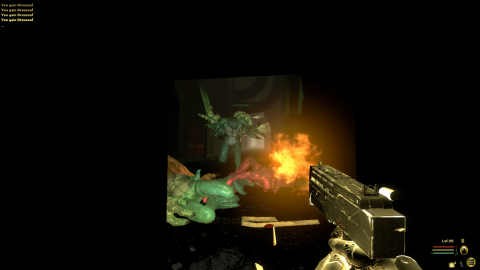 Of course, since this is an RPG with a leveling system, you can get stronger. You can make this faster with brouzouf, a currency you earn from killing enemies the game politely informs you that you earned with a “you gain brouzouf” notice on the top left. Brouzouf can be spent at the base for new weapons or magic, among other things, and you can also go in your menu at any time to fund research or buy cyber parts. Research unlocks as you pick-up silver briefcases that randomly drop from killed enemies, and you can use a slider to assign scientists to a given research to speed up their unlock. They allow you to buy certain stuff, give permanent stat buffs, and other fun stuff. There are also some that are completely useless, because trolling in a major part of this game’s core design.

Cyber parts are even better, though. They can give you bonuses to all sorts of stats and even your body armor, and you should start by investing in your legs. The maps in this game are huge and you’re still a bit slow even with high agility and light armor, so cyborg legs become a great help. They even boost your jumping skills, which can end up with you being able to leap canyons by late-game with enough investing. If you’re willing to put in the time, you can completely break the difficulty with absurdly OP builds. 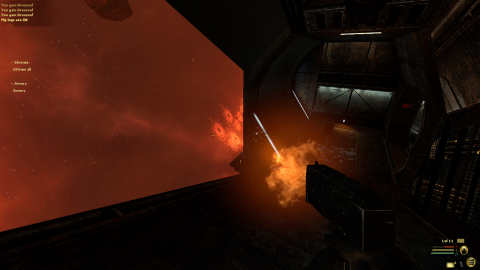 A nice bonus is that actually playing E.Y.E is a blast. The controls are smooth and easily customized to your liking, you can even change enemy spawns and difficulty. Getting the hang of things is challenging, especially with the dozens of tutorial videos included being generally useless, but once it clicks, it really clicks. As an FPS, the game has some great toys to play with, and the magic lunacy just adds to it. Mission design is also very open, like an immersive sim, even letting you hack enemies to fight for you (though you can get hacked back if you fail which sometimes makes your brain explode). Hacking is also pretty cool in itself, done with an active-time battle system where you load up actions alongside your target and try to balance keeping up defenses, wearing down enemy offense, and bringing their health to zero for the win. You even have dialog options at points, which means you get more amazing dialog, which is always welcome.

That not enough? The game has co-op, with a 32 player limit. Yes, 32 players. This is probably why the maps are huge. If there’s any game that you could possibly compare E.Y.E to, it would probably be Rise of the Triad just in terms of sheer number of ridiculous features you’d never think you’d see in any game, though RotT never included a random chance of the game telling you that you killed a drug addict, a loving father, a soccer fan, or a video game censor and then giving you an achievement for it. Nearly half of the game’s 100 achievements are just these. Because. 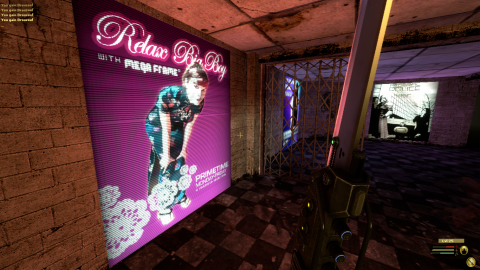 E.Y.E plays like absolutely nothing else, despite it made out of about twelve different games smashed together in the Source engine. It also has a story completely unlike anything else, only fully experienced with three full playthroughs with a single character. It even gets hinted at through the entire game, with new NPCs appearing after main story missions that reveal new information via cryptic, seemingly nonsensical dialog. Without giving it away, a lot of the dream-like nonsense suddenly becomes more meaningful once you realize the philosophies the game is playing with, and what all the constant implications are pointing to. While a lot of this amazing mess is either a product of lacking resources or full on bear poking the player, the story’s big twists are genuinely fascinating and show a great deal of narrative depth you probably thought would never happen after you got into an argument with a werewolf about why humans suck. 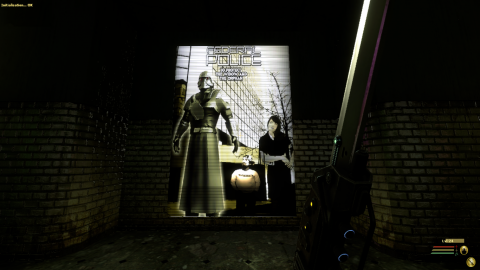 It’s easy to see why someone wouldn’t like E.Y.E upon trying it, even with some of the cool art design. Getting into it almost feels like work at times. However, if you’re willing to try and understand, what one finds is a complex toy box given context with oddly brilliant story and a whole mess of hilarious translation and infuriating developer trolling. There is no polish, but who needs polish when you just have so much stuff and almost all of it is so engaging? Forget high budget experiences, sometimes all you need is a way too large map littered with posters advertising weed and prostitutes, a giant katana that makes things explode into gore chunks, and an endless swarm of demonic abominations with barely any animation frames. Maybe toss in an NPC that does a cuss and makes fun of you for playing video games. You can kill him later to gain more brouzouf. Delicious, delicious brouzouf…