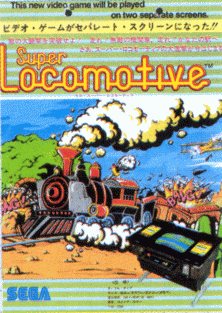 Japan is a country that loves its trains, with mass transit serving as the primary method for most citizens to travel around tightly-packed cityscapes. Many Japanese train simulators exist nowadays, ranging from the simply titled Train Simulator games by Ongakukan, to the more arcade-oriented releases like Taito’s Densha de Go! series. Back before games could ever hope to adequately emulate the real feeling of train conducting, they had to make do with putting trains in situations like escaping sentient enemy trains, warding off bomber planes, and turning invincible to barge through oncoming roadblocks. 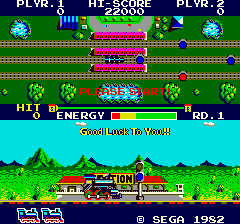 This is the ridiculous touch Sega has given to Super Locomotive, which could be considered the ur-train game, if only due to being one of the first in which you actually drive one. It’s less a straight train game and more like an unorthodox driving/shooter hybrid, but it gets credit for being one of Sega’s rarer releases, and is a veritable hidden gem.

As the titular Super Locomotive, your mission is to travel the tracks and make it to the goal of each area. The action is split into two screens, with the top screen showing your actual progress throughout the tracks, and the bottom shows a sideways close-up of your locomotive and any immediate dangers surrounding it. It can be very tricky to mind both perspectives at once, but focusing too much on the top screen may cause you to neglect any obstacles creeping up on you. For some unknown reason, your locomotive has attracted the ire of other trains, and several types of aircraft to boot. Enemy trains will attempt to crash into you themselves, whereas airplanes (and the occasional blimp) swoop in from above and drop bombs. You’ll even get a gigantic stealth fighter showing up to fire missiles at you from afar, and later levels sic tanks on your flank! No one knows why the hell everything’s trying to kill you, but there are also a couple of incidental obstacles: Trucks passing by on intersecting roads, and closed gates denoted by a flashing red-and-yellow light on the overhead. 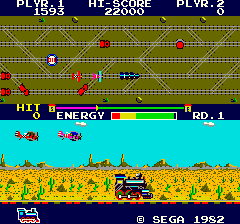 Travel corresponds to the overhead screen, where pushing the joystick right moves the locomotive forward, left slows it down and moves it back, and up and down allow you to switch pathways when you pass by adjoining tracks. Knowing when to change tracks is vital to your survival, but there won’t always be a junction to dodge an oncoming bomb. In tight situations, you have two forms of defense to destroy enemies and interferences, but you have to mind your resources in order to remain armed. One button fires off projectiles behind your locomotive, where tapping the button hits ground targets, and holding onto it causes your projectile to float up and hit aerial objects. Keeping a watch for the bottom screen will tell you what needs to be shot, although you may occasionally encounter a compact bullet train too low to the ground to be hit.

For obstacles you can’t destroy, the other button causes the train to glow brightly and move faster than normal, in addition to being invincible for several seconds. This should only be used in desperate situations, though as hitting the charge drains a fair chunk of your energy bar. Your game doesn’t end if this meter runs out, but it prevents you from further charges, and even shooting projectiles if drained. Thankfully, oil towers and trains replenish some of your energy bar, so you should run over them whenever you get the chance. 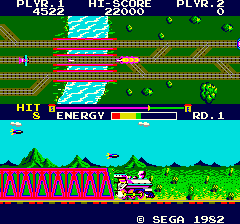 Unactivated stop gates can be switched if you pass by them, thus causing ground targets behind you to meet a sudden end. Overall, there are quite a few methods for dealing with enemies, and taking advantage of as many as you can is the key to surviving for more than a few seconds. Reaching the round goal activates a bonus stage where planes fly by overhead at quick speeds, and you must attempt to shoot down as many as you can a la Galaga‘s “Challenging Stage”. The number of planes which appear are equivalent to the amount of enemies you’ve destroyed in the level up to that point. More enemies equal more points, with a big fat perfect bonus for vanquishing all of them.

The graphics are reasonably astounding for their time, making maximum use of Sega’s Z80 hardware which had been in use for a couple of years. Today, while technically dated, they still bring an old-school charm, characterized by its bright and varied colors. The unique genre-blending gameplay and vibrant appearance are certainly to Super Locomotive‘s credit, but if there’s any reason why the game is memorable, it definitely has to be the outstanding sound design. Throughout each stage, an incredibly catchy and energetic tune runs in sync with your train’s movement. This music is none other than a chiptune rendition of “Rydeen”, a synthpop hit by legendary electronica band Yellow Magic Orchestra. It’s a surprisingly fitting remix that’s set to the motion of the train chugging along, giving the game an added sense of urgency thanks to one of YMO’s most popular songs. 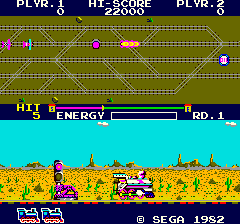 In summary, the fast pace, innovative gameplay, and “Rydeen” make for one of Sega’s most prominent early arcade games. Super Locomotive is definitely an overwhelming and challenging game at first, but learning how to manage both screens and knowing when to charge up and change tracks will go a long way towards improved performance. Give the game enough time, and you’ll find a refreshing experience that never gets old after repeated play. It’s one of Sega’s more obscure titles, though, and the actual arcade board is incredibly rare.

While the game very much looks like it could have just as easily been released on the Sega Master System, Super Locomotive received no home ports, nor any releases in any future compilations. It’s a shame, too, as it really is quite a unique and fun game that hasn’t been matched or duplicated by any subsequent releases.