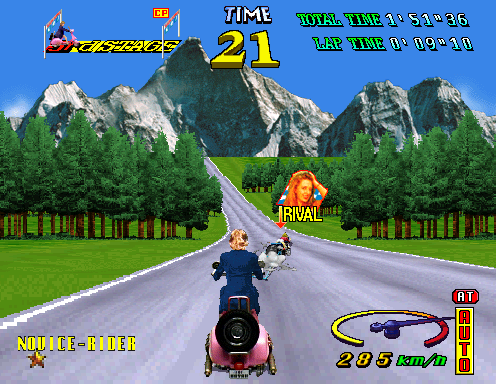 Cool Riders looks and feels a lot like OutRunners, one of the sequels to OutRun, except it features motorcycles rather than cars. The banners in the game’s introduction mean “Outriders,” which suggests that it may have been the original title. It’s the only game to run on the Sega H1 hardware, which allows for higher resolution graphics and dual-monitor support to allow for two players.

As with OutRunners, there are several different branching stages, taking place all around the world. With 50 levels in total (and triple-branching stage exits, rather than the double-branching of OutRun), there’s a ton of content. The controls and physics are basically the same as OutRunners, though you can zoom into the air when you hit a hill at a high enough speed, leaving the game to exclaim “Cool! Cool!” while you’re airborne. 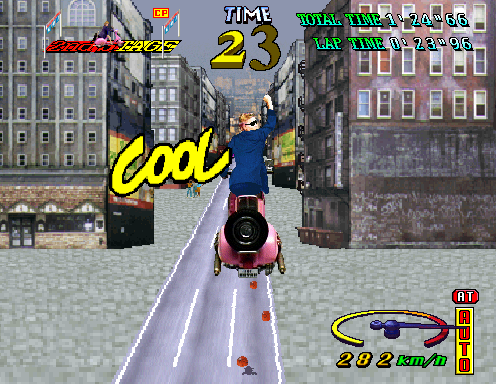 Cool Riders has an absolutely ridiculous sense of humor. While the graphics are still 2D sprites, many of the visuals are digitized images, including the characters, which very heavily dates the game as a product of the 90s. There are eight different racers to pick from, including a cyborg, a female mobster on a scooter, a country music singer duo, a stereotypical biker dude who has two children dressed almost identically to him, and an old man pedaling an old-timey bike. The attract mode is accompanied by Steppenwolf’s “Born to Be Wild,” whose badass-ness contrasts heavily with the ridiculous visuals.

The tracks are just as insane. You can ride bikes across the Great Wall of China and dodge Son Goku cloud-riding-type-things, and also face off against ninjas in Japan. You’ll zoom past dinosaurs and yetis, though they don’t actually do anything other than provide background detail. As usual with these types of “world spanning” games, the landmarks are tossed in haphazardly, so the Statue of Liberty ends up literally right next to what appears to be the Brooklyn Bridge. There are also guys holding arrows by the side of the road during the transition of each stage. You can hit these poor fools as you pass, thereby sending them flying down the road and into the stratosphere.
Cool Riders is incredibly fun to not only play, but to watch, if just to witness the insanity. Alas, it was never ported outside of the arcades. 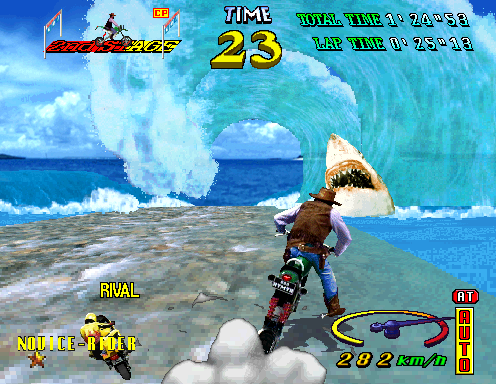