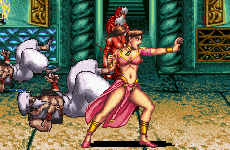 Mention “Sega” and “beat-em-ups” in the same sentence, and most people will think of Streets of Rage, Golden Axe, or Die Hard Arcade / Dynamite Deka. Like most companies, though, there were a handful of other entries that fell through the cracks, either due to poor circumstances or just regular old mediocrity. Sega’s Arabian Fight falls into the latter category.

Arabian Fight is about, as one might surmise, fighting Arabians. You take control of one of four characters to smash your way through Middle Eastern markets, pirate ships, pyramids, castles, and secret underground volcano lairs, all while pummeling the snot out of demons, pirates, mummies, skeletons, fire-breathing fat ruffians, and other beasts. There’s even a ride on a magic carpet, although sadly, you can’t knock enemies off into the sky. Eventually you’ll meet up with the lead bad guy, an evil magician named Sazabiss, who’s kidnapped the Princess Lurana. The Persian backdrop is an interesting change of pace, even if it leads to some confusion with Taito’s similarly titled (and similarly themed) Arabian Magic.

As in Taito’s game, Arabian Fight also offers four-player simultaneous play, with four different characters. There are only two buttons – punch and jump – and the movesets are fairly limited. Each character has a special crowd control attack activated by pressing both buttons simultaneously. Like Golden Axe, you can obtain screen- clearing magic spells, activated by magic lamps. Unlike Golden Axe, though, these spells aren’t character- specific, and depend upon the type of lamp you grab.

The hero is Sinbat, who seems to be Sinbad’s rip-off cousin. Sega could’ve just gone all the way and just called him Sinbad – it’s not like the authors of Arabian Nights were going to rise from the dead and sue them. Ramaya fills the “hot chick in a beat-em-up” quotient instituted ever since Tyris Flare in Golden Axe. Goldor is another turban-clad dude, although this time with dark skin and a beard. He’s a bit stronger and bulkier than Sinbat. Finally, Datta is a Shaolin-esque monk that apparently adventured beyond his homeland and stumbled into this brawl. 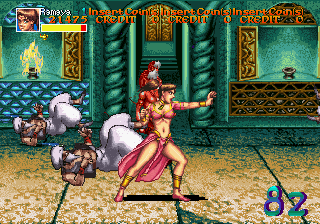 Arabian Fight might be the most technically ambitious 2D beat-em-up ever made. Ever since Renegade, the genre has used a slightly isometric perspective to give the playing field a sense of depth. Arabian Fight takes this to the next level by utilizing sprite scaling, so when characters walk into the background, they actually get smaller. As they reach the foreground, they’re absolutely huge. The characters are easily of comparable size to SNK’s Art of Fighting, which is pretty much unheard of in any belt-scroller. The backgrounds also utilize a cool parallax effect as you walk back and forth, which again, greatly enhances the 3D effects. This technique was utilized in a more restrained manner in Treasure’s Guardian Heroes for the Saturn, although that game featured three different planes you could jump between, while Arabian Fight lets you walk up and down freely.

The graphical dazzle doesn’t stop there. Enemies will routinely appear in the foreground, represented by full-size illustrations, and then jump onto the playing field, where they change into a standard, pixel- drawn sprite. Similarly, you can chuck characters right into the screen – similar to the move in Teenage Mutant Ninja Turtles: Turtles in Time – although, again, with the use of full-res illustrations, it looks substantially less pixelated. Whenever you use a special attack, your character jumps out of the playing field and right into the screen – again, represented as a fully animated drawing – as they spin around and release havoc on the enemies.     Some of the boss death scenes show some cool close-ups, and the intermission cinemas between levels are equally as cool. When you run out of lives, your character is knocked forward, as you lie unconscious right before your eyes with the continue timer counting down. It’s all quite impressive to watch, even though the artwork is heavily dithered and lacking in color.

The problem with all of this visual excess is that the fighting action itself is kind of terrible. If you have four players on the screen at the same time, in addition to the half dozen or so enemies – remember, everyone is roughly 2/3 the size of the screen when they’re in the foreground – then it becomes nearly impossible to make out any of the action. Further, even though the sprites are quite detailed, the animation is appalling – at best, it’s choppy, but at worst, some of the frames just look massively stupid, especially with the enemies. There aren’t even any weapons or much in the way of variety. The hit detection is similarly sloppy, and the whole affair comes off as sadly amateurish – quite a disappointment from an industry veteran like Sega.

The soundtrack mostly consists of a variety of world music, which suits the setting but doesn’t necessarily fit the action. The only decent theme is a guitar- driven track late in the game, but the rest is either annoying or forgettable.

Arabian Fight was released in 1991, during that awkward period when 16-bit consoles weren’t powerful enough for most accurate arcade ports, but well before any of the 32-bit systems were released. As such, this game only saw distribution in the arcades. Perhaps Sega realized that it would need a drastic retooling of the controls in order for it to survive in the home market, while the impressive graphics were enough to keep it afloat in the arcades. Beat-em-up fans should check it out, if only for a level or two, just to see how cool it looks in motion, stupid animation notwithstanding.