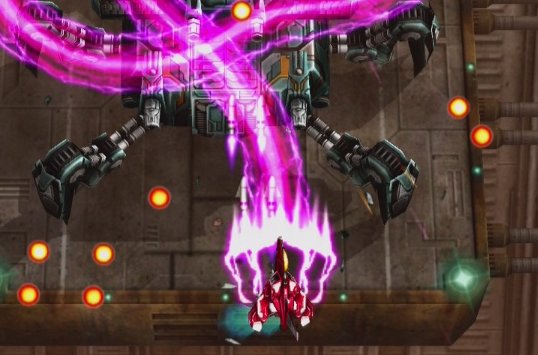 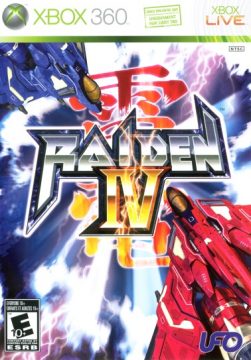 After the somewhat diminishing return of Raiden III, the revival of the classic series would get another shot with Raiden IV. shoot-em-ups are considered a relatively niche genre in the modern-day, so any chances of the series reaching its heyday of popularity are admittedly low. That being said, could Raiden IV still manage to keep the series relevant to fans of the genre? It would seem that MOSS has learned from some of their mistakes and have most certainly made a more enjoyable game than Raiden III. It may not feel precisely like the classic games or match the high intensity of the Raiden Fighters series, but it stands over its predecessor as a more competent shoot-em-up. Strangely (and somewhat lamely) enough, the game only has five stages, but that’s only for the original arcade version. The Xbox 360 version is the way to go, as it offers two more levels to bring the total up to seven, the same amount of levels from Raiden III. 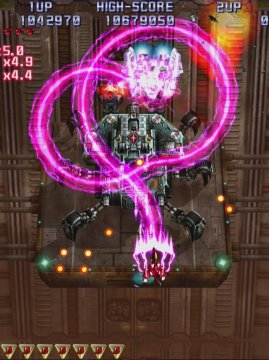 Running off of the exact same hardware as Raiden III (the Taito Type X board), Raiden IV looks improved, with the textures appearing somewhat more authentic and the overall tone of appearance being brighter and clearer. The stages are what you would likely expect from the series at this point: An open farmland, a dark valley, the requisite ocean base cluster (this time featuring what seems like a travel bridge), a spooky ancient ruin leading into an underground base, an asteroid field, a spaceship armada and a massive satellite, and a gigantic missile of which you must stop its eventual destination. While the graphics look pretty danged good, arguably the greatest quality about Raiden IV is its fantastic OST, modern synth rock more suiting for a shoot-em-up than the decidedly generic Raiden III soundtrack. Much of this game’s BGMs are actually remixed from the first two Raiden games, with the two boss fight tunes being particularly noticeable in this regard. The American Xbox 360 release comes with a bonus disc of the game’s music.

This game already kicks Raiden III‘s butt simply by reintroducing the classic purple “toothpaste” beam of death, and it looks awesome on the Taito Type X engine. For the weirdos who somehow missed Raiden III‘s green proton laser, you get the choice at the beginning of each game to decide between “plasma” or “proton” for the purple weapon. The proton laser blows less in this game by shooting out three streams at once, making it look like you’re sprouting three tentacles at once from your ship. The plasma laser is still the way to go in my opinion, but it’s nice that they offer an alternate that’s still preferable to Raiden III‘s suck beam. Everything else is more or less how they were from Raiden III, including the vulcan, the laser, and all three missile types. The medals are the same as they were in Raiden III, though there’s a slightly different design on medals you acquire from the air, yet both medals alike earn you 3000 points. 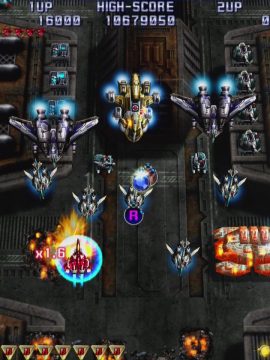 The scoring system of Raiden III carries over, and fairies are still hidden in most stages to boost your point total. It also factors in enemies destroyed and the destroy rate of enemies, very similar to Viper Phase-1. You also get a multiplication bonus for the “flash shot,” which also earns you bonus points while playing for destroying enemies really quickly. The multiplier for the flash shot goes up to a maximum of 5.0 instead of 2.0 this time, leading to a potentially billion-digit score alongside the myriad of enemies to destroy. In the vein of its immediate predecessor, Raiden IV is also very much a bullet hell, for better or worse. The pace feels a bit more balanced than Raiden III, a bit faster while the flow of bullets isn’t as overwhelming, but still requiring judicious use of the bomb attack and recognition of your hitbox. While it does not feel as much like classic Raiden as it could be, it offers a bit more enemy and environment variety than Raiden III and is overall more engaging.

The bosses are a good deal more interesting than those from Raiden III, as many of them appear to be spins on classic boss archetypes from the series. For the first time in the classic games, the first boss, a large multi-legged war machine, comes along without having a second version of it show up. However, what it does have is a second form that blitzes you with bullets after having taken some punishment. The two bosses at the end of stage 4 ostensibly appear to be homages to the classic spider tank bosses of Raiden II moving on rails, but after taking damage, they get up off the rails and fly erratically around the screen. What appears to be the final boss is rather atypical for the series so far; instead of being the heavily fortified enemy home base, it is a floating armored core surrounded by a polygonal shield consisted of many triangles and spikes. Blow away the outer layer to reveal none other than the nefarious Crassanian red diamond, the final boss of Raiden II and III, just as ridiculously difficult as ever. However, if you are playing the game on its second loop, this is not the true final fight. The diamond flees to lodge itself into a more traditional casing for the actual finale, the command console of what appears to be a massive rail cannon likely poised to obliterate Earth. 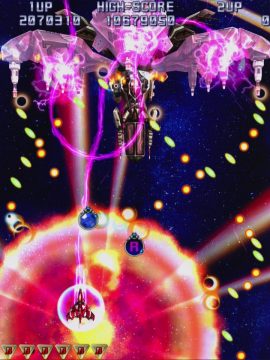 Stages 5 and 6 are found only in the Xbox 360 version, perhaps indicating the developers’ thoughts on the decline of the arcade market. The 360 version offers a fair amount of goodies, including Score Attack, Boss Rush, a gallery of all the game’s enemies, and the option to play Arcade mode for whatever reason. It also has the awesome Double mode of Raiden III, hard as control but manic fun as before. Perhaps the most interesting new feature is the choice between two fighters different from the default one, which unfortunately require a bit of additional cash to pay for the DLC, but merely a dollar for each. The Raiden Mk-II has some weapons akin to the default Fighting Thunder craft, but it also has the added bonus of charging up its missile attacks by holding fire of a few seconds, only to fire out a massive burst of missiles in a fashion akin to the Raiden Fighters games. It also has the sucky Proton green laser, but only if you choose “Proton” before starting the game. The more interesting choice is the Fairy, the classic Raiden bonus item which was also playable in the Raiden Fighters series. The Fairy fires powerful individual lasers instead of one long unbroken stream, and it shoots off a myriad of bubbles instead of the plasma/proton laser, which is a surprisingly fun weapon to use. It’s not necessary to play either of these bonus ships to get the full experience of the game, but they are interesting variables in the neo-classic Raiden formula.

All in all, Raiden IV is a step forward from its predecessor, being much improved over the mediocre Raiden III, even if it cannot possibly match up to the legacy of the classic Raiden games. Raiden IV may not be an absolute return to form, but it does better what Raiden III attempted to do by feeling like a decent homage to the old series while offering enough new on its own.