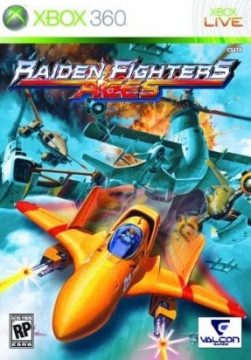 Raiden Fighters is something certainly different from the original Raiden games, mostly because it was originally conceived as a totally different game called Gun Dogs. However, it has enough familiar elements with its parent series that makes it worthy to bear the Raiden title. Essentially, Raiden Fighters is to Raiden as Mega Man X is to Mega Man. It chucks out the Crassanian Empire and the somewhat sci-fi feel of the classic series to focus more on a modern military atmosphere not entirely unlike Capcom’s 19XX series or Psikyo’s Strikers 1945 games. You are apparently waging war against an anonymous dictator and you fight through the leader’s armada of land, sea, and air units using one of several modern fighter jets. If anyone who thinks the pace of the old-school Raiden games is relatively docile compared to later overhead shoot-em-ups, here comes Raiden Fighters to kick you in the ass at sonic speed.

The graphics run on the Seibu SPI hardware, the same engine off of which Viper Phase 1 was based. The game is aesthetically impressive, carrying over the constant visual detail of the series with the details of parts breaking down and flying all around after they explode. The music is of a notably different direction for the series, but it really kicks ass, comprised of hard techno and rave music. It may not be as outright memorable as some of the classic Raiden tunes, but it certainly goes well with the overall new feeling of the series. The big draw about Raiden Fighter is that, most like other shoot-em-ups of the mid-’90s, you’ve got a good selection of various fighters with different attributes each. 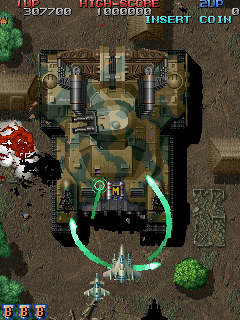 There are seven fighters (plus an interesting secret one) up for play. Unlike previous titles where the main gun and missile sub-weapons were counted as separate icons, there are simply two types of powerup to collect, M (missile) and L (laser). For most ships, collecting these icons boosts their main gun and enhances the power of whatever sub-weapon they pick up. The M-type weapons tend to be more powerful, while the L-type weapons are more versatile and better for picking off smaller enemies. Furthermore, most of the ships can charge their attacks by holding down the fire button and letting loose with either an awesome sub-weapon barrage or a really powerful unique attack.

As in the classic games, you get bombs to help you deal with enemy congestion; to start, you only have two instead of three, but you can pick up more by catching the B icons. These bombs shoot out a large projectile which you detonate by releasing the bomb button, creating an impressive fire swirl that doesn’t do as much damage as the classic Raiden bombs but is very helpful for cancelling enemy fire. Finally, the S pickup gives you a Slave, a small assist fighter that shoots out quick straight shots and protects you from enemy gunfire for several hits. You can have two Slaves at a time, and by default, they remain at the side of your fighter. However, picking up another S with two Slaves changes their formation and causes them to be positioned differently as well as fire in a new pattern. 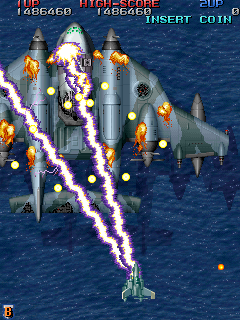 The five default planes are named from A to E: The Aegis, the Beast Wing, the Chaser, the Devastator, and the Endeavor. The Aegis is well-rounded and has no significant faults or strengths to note. Its main gun fires off in a narrow spread, its L weapon fires out neat green homing lasers, and its M weapon shoots fast straight missiles. The Beast Wing is the slowest but the most powerful, the “flying tank,” so to speak. Its main gun is a wide spreadshot of moderate speed, its L weapon is a straight laser (which fires an awesome spiral beam for its charged version), and the M weapon is quick homing missiles. The Chaser is the fastest fighter but technically the least powerful, though don’t count out its versatile weapons. Its main cannon is fast but very narrow, its L weapon shoots long homing beams (with the charged version acting a lot like the famous “toothpaste laser”), and its M weapon fires semi-homing missiles that travel sideways before flying towards enemies.

The Devastator is powerful, not quite as much as the Beast Wing, but a bit faster to compensate. Its main weapon is similar to the Aegis with a wider spread, its L weapon shoots out lightning beams that home in on enemies (charge up for an impressive light show) and its M weapon fires slow but very strong incendiary missiles. The Endeavor is quick, a bit less so than the Chaser, but has slightly more powerful armaments. Its main weapon is a fast straight twin shot, its L weapon shoots neat-looking magenta beams in multiple forward directions, and its bizarre M weapon fires mines that are not particularly powerful but have the notable advantage of nullifying enemy projectiles. 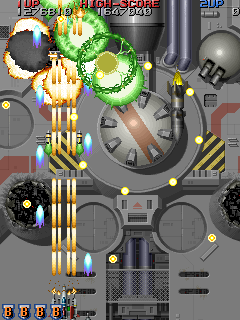 There are also two fighters that can either be unlocked from the start in the arcade via either dipswitch or time release, though they are immediately unlocked in the 360 version. One of them is none other than the Raiden Mk-II from the classic Raiden games, and while it cannot charge its shots like other ships, it compensates by being able to use both weapon types at the same time. The main weapon is none other than the toothpaste laser in full glory, and the sub-weapon is the homing missile (H) from classic Raiden. The other “guest ship” is the Judge Spear, hailing from Viper Phase 1, and it is the fastest ship in the game. It also uses both of its weapons at the same time with a powerful vulcan laser and fast missiles that leave large green explosions (the napalm missiles from VP1). Combined, both weapons have almost no horizontal spread but are really fast and powerful. Plus, the JS’ bomb is the same as from VP1, a large perfect circle of fiery destruction. Both the Raiden Mk-II and Judge Spear start out with three bombs instead of two, perhaps to make up for the lack of chargeable sub-weapons.

There’s also a secret “fighter” in the form of the Slave, the tiny ships that you normally receive as power-ups. They are playable by holding up or down on the joystick and pressing the start, fire, and bomb buttons together (or just holding B in Raiden Fighters Aces). The Slave you play as depends on the ship you highlight, and the only real difference between them are their speed. For example, the Beast Wing’s Slave trudges along at an average page, but the Judge Spear Slave jets across the screen as does its “parent.” All Slaves have the same attack: An unchargeable rapid fire gun that fires off in a five-way spread when fully powered up via M or L pickups. It might not seem like much, but it becomes surprisingly powerful when at its maximum, and the smaller hitbox of the Slave is a bonus for avoiding enemy fire.

The order of the first two stages, a muddy airfield and a forest base, are randomly determined in order. The fourth and fifth stages, a trainyard and an arctic sea, also change up with each other, but the third, sixth, and seventh (final) stages remain in place. The third and sixth stages, taking place against a naval and aerial fleet respectively, are lengthy fights against a titanic battle cruiser and a massive bomber airship, roving over their architecture fighting off waves of enemies and their own armaments until you reach their core. These gigantic bosses have multiple targets, dangerous or otherwise, that add up to the score of the end of the level. You can destroy up to 100% of all targets, though it can be difficult to do so. This bonus also applies to the final stage, the enemy fortress which is full of turrets and the final boss against the nameless dictator’s command tower.

The score you acquire for this percentage bonus is based on the amount of medals you collect in each stage. The medals here look like small horizontal glowing rectangles, and they start out only giving you a bunch of puny 10-point bonuses. The more medals you collect without missing any, the higher the score increases. When you get up to 90 points, collecting a Slave icon makes the medals appear larger and give over 100 points, with increasing increments up to 900, and you can increase the multiplier all the way up to a potential 100,000 just as long as you don’t miss any medals. Good old Miclus and the Fairy are still around as giga-point bonus items, though you can potentially kill the Fairy by accident and get screwed out of a bunch of points if you’re too hasty on the trigger finger. You also get bonuses for “QUICK SHOT!” if you destroy a large enemy before it has a chance to shoot at you, as well as “DESTROYED AT A TIME!” if you blow up two special targets within one second of each other. There are probably a good deal of other methods for boosting score, but the important thing is to literally shoot everything and not get blown up yourself! 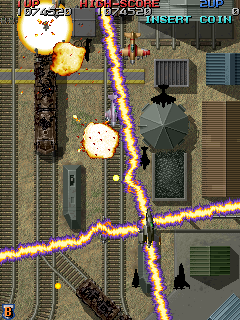 Raiden Fighters is a suitably challenging game that pushes the series further into bullet hell territory, though it’s still not as insane as other shoot-em-ups which shrink your hitbox down to a dot. Raiden Fighters is notably faster and fiercer than any other entry in the series, and it really is a hell of a ride from start to finish, what with all of the driving techno music and ridiculous number of explosions. If you ever see it in the arcade, definitely give it a run, especially if you have a bud along for good old two-player carnage. For the longest time, Raiden Fighters was never released to a home console until Raiden Fighters Aces for the Xbox 360. This compilation contains all three Raiden Fighters titles, and it also includes all possible customization options for each game normally only available via dipswitches. It even gives to Raiden Fighters a Boss Rush mode and an Expert mode, much like the regular game but where destroyed enemies fire off bullets posthumously. It also has a wealth of display options for the purists, and it’s a fantastic value overall.