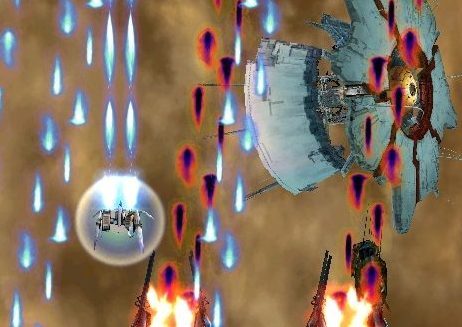 Some people will try to tell you that Ikaruga is not “Radiant Silvergun 2”. At the time of its release, that may have seemed true – although its work-in-progress name was “Project RS2”, the final product was a significantly different game from the Saturn/arcade classic. In the following years, Treasure created a couple of sequels which greatly changed up the game mechanics, such as the jump from Guardian Heroes to Guardian Heroes Advance, or Bangai-O to Bangai-O Spirits. The sequels are not mere extensions of the original games, but a drastic evolution of game mechanics, with very different attitudes towards pacing and freedom. From this perspective, Ikaruga is very much the successor to Radiant Silvergun. It features a similar graphic style, although the upgrade to the Naomi from the ST-V puts out substantially prettier 3D graphics. It also features chaining mechanics similar to Silvergun, with each enemy having a unique color. And they both focus on hugely epic, intricate boss battles.

However, Ikaruga is a much more concentrated game that Silvergun ever was. Ikaruga has only five stages, and can be completed in roughly twenty minutes. There are only five real bosses, compared to the twenty or so in Silvergun. It’s approximately a third of the length, but in reducing the scope, it’s created a much more focused and engrossing experience. It also cuts out the weapons down to two. Your primary weapon is a standard, rapid firing laser, as well as a special homing attack limited by your power gauge, but that’s it. Your main weapon cannot be powered up at all, although your homing attacks are made more powerful depending on your power gauge. There are no real story sequences, no RPG elements at all. Plus, Radiant Silvergun was a bit slow paced and deliberate, but Ikaruga kicks up the speed considerably. 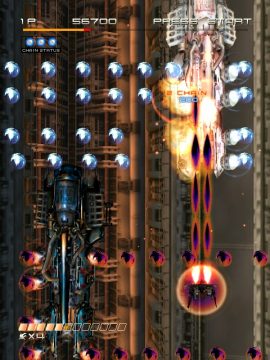 The primary mechanic borrows a bit from Treasure’s side scrolling platformer, Silhouette Mirage. Your ship, as well as all enemies, falls into two classifications: black or white. (The title of the game, as well as the ship, is named after a specimen of mottled dove, which is both black and white.) If your ship is black, then it can absorb all bullets fired by black enemies, but can still be killed by white projectiles. However, your attack strength is doubled against white foes. The opposite is true of course too – while your ship is white, you’re practically invincible to white attacks, and can heavily damage black foes. You can switch polarities at anytime, of course, and determining which color is best for which situation is completely up to the player. It’s a beautiful system of risk and reward integrated into the very core of the action.

Now, back in Silhouette Mirage, getting hit by the same attribute drained your power meter. In Ikaruga, it actually replenishes it, which gives you incentive to charge head first into enemy fire. On Normal difficulty and above, there’s an additional feature – if you destroy an enemy of the same attribute, they’ll fire a few scatter shots right as they explode. This allows you to power up your special meter faster, but can also cause havoc if you want to switch colors, because it’ll leave you quite vulnerable. It works better in Ikaruga than it ever did in Silhouette Mirage, mostly due to the overhead perspective – Silhouette required the character to turn around and approach enemies at different angles to take advantage of the system, but Ikaruga, all you need to do is hit a button. 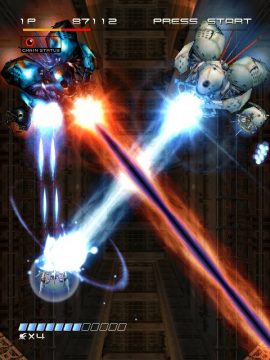 Capcom’s Bionic Commando (the NES version) is perhaps the most genius platformer ever made, primarily because it removed your ability to jump. Without one of the most primary gaming functions, you need to approach every single situation from a different angle, all while relearning its most basic functions. Ikaruga is a bit similar in that respect – nearly every single other shooter out there has taught us to dodge bullets, yet Ikaruga teaches you to run head first into enemy fire. Certain enemies shoot out hugely powerful lasers beams, but if you’re the same color, you merely get pushed to the side and harmlessly absorb its strength. The practice of having years of video gaming experience deprogrammed and reinitialized takes several stages – first confusion, then perhaps anger and frustration, before moving onto acceptance, and then, perhaps, acknowledgment of its brilliance. Much like a certain small segment of the hardcore shooter base complained that Radiant Silvergun was too slow and over complicated – the very things that made it incredible – Ikaruga tends to get criticized because it feels less like a shooter and more like a puzzle game. And yet this ability to break boundaries is precisely why Ikaruga sits high above the rest of its genre, transcending from simply being a fantastic shooter, to a fantastic video game.

There is still a color chaining system in Ikaruga, although it’s a bit changed from Radiant Silvergun. If you kill three enemies of the same color, you’re awarded a chain. However, you can switch between colors and keep building up your chains, as long as you kill enemies in sets of three. Mechanically, it makes a bit more sense, but it’s lacking a sense of reward. In Silvergun, keeping your chains up rewarded you with more powerful weapons. In Ikaruga, it only affects your score and end of level ranking, and the requirements to get extra lives are far too high to make it worthwhile. It’s excellent for hardcore gamers that play for score, and seeing it in motion in superplays is a thing of beauty, but it’s a bit useless for everyone else. There should have been some better way to integrate the rewards into the actual game, but it’s a minor shortcoming. 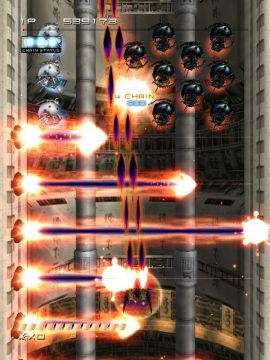 Graphically, it’s one of the best looking games on the Dreamcast. Many modern 2D shoot-em-ups that use 3D graphics, like Shikigami no Shiro and Homura, tend to look really cheap and ugly, but Ikaruga has crisp texture work and oppressively beautiful visuals. The engine was created in part by G.Rev, who had built a lot of the technology for their Naomi/Dreamcast shooter Border Down, and was later updated and put to use again for Gradius V. Like Radiant Silvergun, it also has a flair for dramatic cinemas. Each level begins with a brief prologue, before a cinema takes over, as your ship flies into the sky and the intro text is displayed. Each level begins with a short poem, and each stage name is an allusion towards the struggle towards enlightenment as found in Buddhism, which lends the game an artistic (if somewhat pretentious) flair. Then your ship blasts off back into play and you take over once again. All of this is perfectly punctuated with the musical score, which builds up to the climax of the sequence perfectly. The music is very similar to Radiant Silvergun in style, although like the rest of Ikaruga, it’s a bit faster paced and more intense. Certain tracks are backed with a shamisen, lending a uniquely Japanese feeling to the orchestrations. The music is composed by Hiroshi Iuchi, who also the head designer and one of the main graphic artists.

There is a plot to Ikaruga, although unlike Silvergun, it mostly sticks to the background. 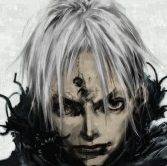 The player one character, Shinra is a freedom fighter who was shot down over the village of Ikaruga. He was nursed back to health and resumes his crusade against the evil empire of Horai. His ship is also named the Ikaruga. 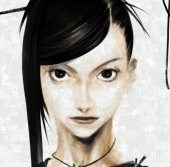 The player two character, Kagari’s story is much like Shinra’s. Her ship is named the Ginkei. 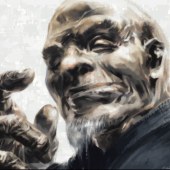 The village chief who found Shinra’s destroyed craft, and helped him in his recovery. 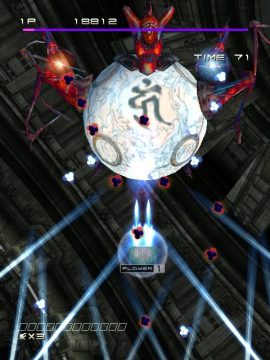 You’d never know any of this if you didn’t read any of the manual info – other than a shot of Shinra walking towards his ship as you choose your difficulty level, the rest of the characters don’t appear at all. The artwork, designed by Yasushi Suzuki, the same illustrator behind Sin and Punishment, is significantly classier than Radiant Silvergun‘s bright anime caricatures – no offense to Han, but they definitely clashed with the serious, apocalyptic overtones. The infamous crystal from Silvergun also makes a guest appearance at the end of the game, similar to how Golden Silver from Gunstar Heroes showed up at the end of Guardian Heroes, although this is more for fan service and doesn’t actually link the two games together.

Ikaruga ranks up next to Gunstar Heroes as one of Treasure’s most internationally popular games, and it’s easy to see why. The compelling atmosphere, the brilliant polarity mechanism, and the overall epic feel of the entire game make for one of the most remarkable shooters of all time. 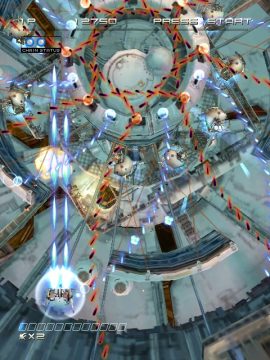 Ikaruga was initially released in the arcade for the Naomi platform, and eventually got ported to the Dreamcast in Japan, about a year after the “official” death of the system. Everyone assumed it was going to be the last Dreamcast game, although it was followed up by a number of other niche games for at least a few more years. It’s an exact port, along with practice modes and an artwork gallery.

Similar to Radiant Silvergun, you start out with limited continues, but every hour of play gives you an extra credit, a feature which should be implemented in every single arcade port. Beating certain goals or playing for a certain amount of hours also unlocks a few bonus features. Most notable is the “prototype” mode, which changes the power gauge to a bullet counter, which depletes when you fire both your regular cannon and your super attack. Like the standard game, the only way to restore it is to absorb enemy bullets. 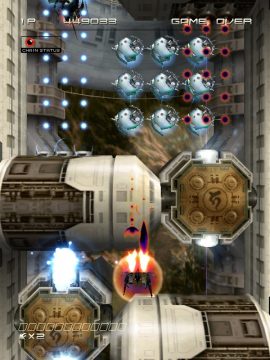 About a year after the Dreamcast release, Ikaruga was ported to the Nintendo Gamecube. Other than a few additional modes, like the ability to play chunks of the stages in slow motion, it’s pretty much the same as the Dreamcast version. This is also the first time Ikaruga saw release outside of Japan, as it was published by Atari in both North American and Europe. It’s mostly known for the hilariously awful (if well intentioned) IGN quote on its cover, which reads “Our frothing demand for this game increases.”, which has since become a meme amongst gaming nerd culture. Stupidly, instead of translating the poems and the ending, they simply removed of all of the in-game text, which is quite lazy.

A few years down the road, in 2008, Treasure released Ikaruga for the Xbox 360 Live Arcade. Given that the disc versions of the game had since become valued collectors items, being able to easily download the game – for a mere 800 points – exposed Ikaruga‘s genius to an even wider audience. 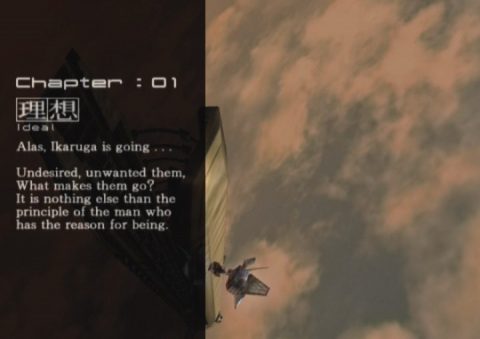 It’s basically the same game, although it looks extremely gorgeous with high res visuals, even though the actual assets are the same. However, it’s missing the extra modes from the Gamecube version, and for some reason, the scene with Shinra walking to the Ikaruga, where you select your difficulty mode, has been removed. Some of the patterns of certain levels have also been changed, perhaps to throw off veterans. It also translates the story text this time, which basically makes this the definitive English version. This version was later ported to Windows as well.