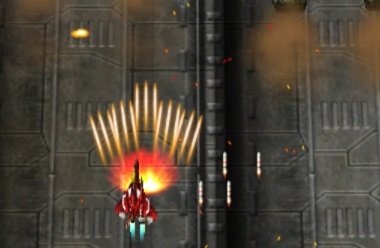 Seven years after Raiden Fighters Jet and a staggering eleven years after Raiden DX, the last of the classic series, Raiden finally makes a comeback and gets back to its roots by declaring the release of an actual Raiden III. Gone are the militant settings of Raiden Fighters in lieu of the good old red and blue spaceships warring against the violent Crassanian Empire, just like old times. Was Raiden III worth the wait? The short answer is “not really,” but that’s being too glib. Seibu Kaihatsu had since shut down, but some of the original developers formed a new company called Moss, who took over the series. The result has turned out to be something that, while decent, just feels like it somehow missed its maximum potential. It’s certainly passable as a shoot-em-up on its own merits, but as the official new sequel of the long-dormant classic series, it leaves something to be desired. 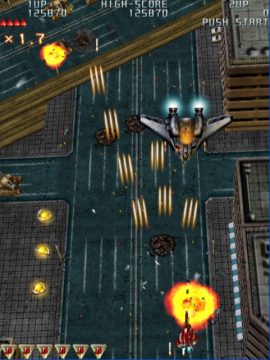 There are seven levels in total, and it certainly starts out looking like Raiden, albeit in shiny new not-sprite graphics. The first (somewhat) noticeable thing it changes from the classic games is keeping all of the action on the same screen at once instead of allowing you to scroll from left to right and back again. It maybe be a relatively minor mechanic, but it was something that makes Raiden unique, and restricting the action to a nonflexible screen makes the game feel a bit cramped compared to all previous entries. Whatever the case, the levels are, in order, a besieged city, a ravine in the mountains, multiple bases on the ocean, a fight in space leading to an intergalactic tunnel, a large enemy fortress (possibly the insides of a giant weapon), a base improbably linked by a series of asteroids, and the Crassanian home planet. The levels look good on the Taito Type X hardware, though they’re not particularly outstanding. There’s not much to say about the music, sadly: It’s decent with the context of the game, but sadly not quite as remarkable as any of the music from either the classic Raiden games or the Raiden Fighters series.

The game plays somewhat similar to the classic titles, though there have been some changes here and there, mostly not for the better. What’s the same are most of the classic weapons: The red vulcan, the blue laser, the burst missiles, the homing missiles, and of course, the bombs. The bonus medal items return, looking less like medals and more like shiny gold orbs. The Fairy bonus item still exists in hidden areas, but sadly, cute little Miclus is nowhere to be found this time. The end-of-score bonus this time around is still based off of how many medals you collect and how many bombs you retain, but now there is also the factor of how many lives you have left after beating the boss of the stage. You also get an additional “flash shot” bonus for each enemy destroyed quickly, a bonus multiplier ranging from 1.1 to 2.0. This means you can potentially double your score per enemy destroyed if you’re quick enough. Unfortunately, you won’t have the toothpaste Plasma beam with which to destroy enemies, but you’ll have to settle for a suitably lamer replacement.

Dubbed the “Proton Laser,” this green weapon is an unbroken stream that sways around like the old Plasma laser but does not lock onto its targets. Without the lock-on feature, the Proton weapon is an inferior version to the more powerful (but less controllable) blue laser. At least the red and blue weapons are more or less the same, though the red vulcan shot starts out with a slight three-way spread, giving you a bit more edge every time after you die. Furthermore, there is a new type of missile alongside the classic impact and homing missiles. The Radar missiles act as a combination of the two, where the missiles fly forward but adjust their trajectory to hit the nearest enemy. The bombs are also somewhat different; instead of dropping a large nuke in a concentrated area, the bomb here simply wipes away everything on screen, bullets and minor enemies alike. Sadly, the cluster bomb from Raiden II / DX is not present. 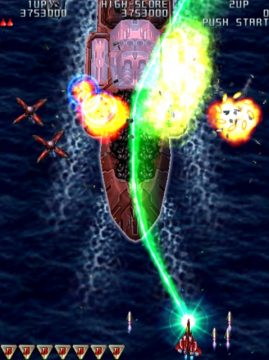 The bomb itself is meant to be used more defensively than offensively in accordance to the ridiculous new pace of bullets that will likely fill up the screen. As usual, the game starts out reasonably kind until about stage 3, where the insanity level reaches a maxim far more insane than to what old-school Raiden players are used. Make no mistake, Raiden III is officially a bullet hell, crossing the line on which Raiden and Raiden II bordered upon back in the day. The bullets are numerous and travel fast, especially prominent in the boss fights but even noticeable among regular enemies near the endgame. The ship’s hitbox is also subtly smaller than previous installments, requiring you to really wedge the ship in between waves of orange and yellow death. The game feels less like Raiden and more like a typical danmaku shoot-em-up, not really fitting to how the series has been up to this point. The Raiden Fighters games got a bit nuts, but they didn’t feel like they required bombs to be fired every five seconds to shrug off enemy fire.

If nothing else, the bosses at least look reasonably cool, though they’re not quite as varied as the bosses from the classic games. In the tradition of the older games, the first boss appears to be a giant tank with what seems like a large six-shooter shaped multi-missile pod, but another one just like it comes into the first several seconds later. The bulky sixth boss starts off by dropping annoying large spheres that are tough to shoot through, and when you think you’ve destroyed it, it sheds its outer layer and spreads wings before challenging you again. The last boss is the obligatory heavily armored Crassanian head fortress, and as in Raiden II, the red diamond which appears to somehow be the leader of the enemy pops out and assaults you in a fashion similar to the final boss of Radiant Silvergun. 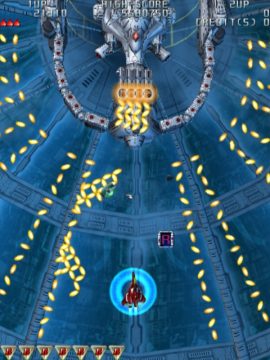 It’s not that there’s anything wrong with Raiden III per se, but its design feels overall generic compared to the classic arcade titles. It does not know whether it wants to be a full-out modern shoot-em-up or an absolute throwback to the older Raiden games, and it suffers from attempting to balance both ends. At least the PlayStation 2 port offers some neat goodies, including the obligatory score attack and boss rush modes, as well as the ability to choose any one of the stages on which to start. There’s also a gallery of enemies and bosses to view and lots of neat concept art. It’s not quite as meaty as Raiden DX, but it does boost a bit of value to the overall package, if only slightly. The coolest feature is Double mode, where a single player gets to control both the red and blue Raiden fighters at once using both analog sticks. It is VERY tricky to control properly, but it’s a fun ride for as long as you can get it to last. The Windows port, originally released only in Japan but later released worldwide on digital distribution platforms, is essentially identical to the PlayStation 2 version, but looks slightly crisper due to the higher resolution.