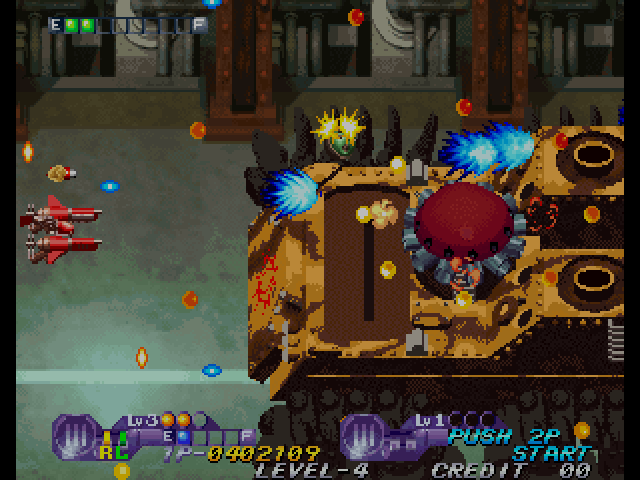 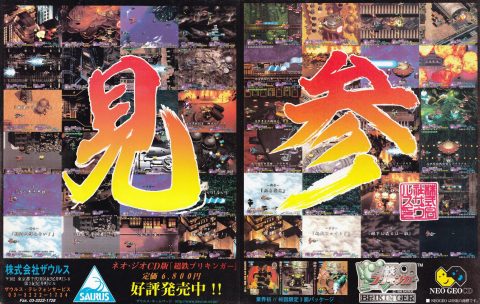 Developer Saurus worked as a second-party subsidiary of SNK for the Neo Geo and probably is most famous for its Shock Troopers games. Saurus also developed the lesser known side-scrolling shoot-em-up Ironclad, also known as Super Iron Brikinger, also known as Chotetsu Brikin’ger. Ironclad was published by SNK for the Neo Geo CD in Japan in 1996. Despite being released only in Japan, the game is playable in English and displays the “Ironclad” title screen when using a North American or European system.

Because Ironclad only made it to market in Neo Geo CD form and was never released outside of Japan, it became a sought-after (and highly expensive) title in the Neo Geo scene. While the game was not released in arcades, a prototype MVS version existed which was shown in the March 1996 ACME show in Orlando, Florida. In the years following, rumors kept emerging about the cartridge version having surfaced, although claims were never backed up with proof. This all changed with the game’s digital re-release for the Wii Virtual Console title in 2010. This version was hacked not long after and there are now AES and MVS conversions being made of Ironclad. 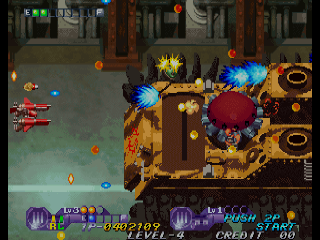 Ironclad’s backstory revolves around the peaceful Kingdom of Choppu which is invaded by the Iron Mask Republic in the year 1920. The Kingdom’s resistance developed several high-tech ships equipped with the Ironclad robot for support. It is up to the player to maneuver a warship and command an Ironclad in order to defeat the Iron Mask Republic. The story nicely underpins the game’s sci-fi and steampunk themes and is told in the intro and ending scenes, as well as short dialog boxes before boss fights.

In Ironclad you fly over urban landscapes, forests, undergrounds and oceans. The game uses a slightly skewed perspective from higher up, similar to shooters like Progear or Akai Katana. In most areas the terrain does not affect gameplay although there are some tunnel like areas where the movement of your craft is constrained. For the most part, enemies consist of a variety of helicopters and other aircraft and walking robots and tanks on the ground. Objects and backgrounds consist of 3D renders, often overlaid with digitized images and mixed with pixel art.

The graphics are somewhat inconsistent resulting in ups and downs of attractive areas sections intertwined with some less inspired ones. Some parts feature multi-layered parallax scrolling with background animations, while others are rather empty and dull-looking. Generally speaking, areas featuring more pixel art have aged considerably better than their more digitized counterparts. Ironclad tends to use single tone color pallets which gives the game a moody look, yet results in an esthetic lacking the vibrancy typically associated with arcade games. In the single-player mode there is some minor slowdown when things get hectic, but this does not affect gameplay. In the two-player mode, however, the slowdown is quite bad making the game almost unplayable at times. 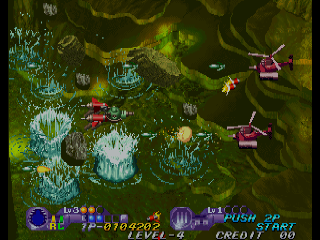 The music is a highlight of the game, mixed with original and great quality sound effects. The upbeat soundtrack of the first level, for example, really gets you in the mood to kick some ass and shoot stuff. Overall the soundtrack is diverse, ranging from rock and electro to moody soundscapes, and uses a wide variety of instruments including guitars, drums, bells, piano’s and synthesizers. The CD version obviously sounds better, although the music of the cartridge version is by no means terrible to listen to.

The player can choose between three different ships (a powerful one, a fast one, or a balanced one). There are no lives, as the player has a life meter which can be replenished by picking up a health module. The player can also pick up items to equip different weapons and power them up. Unique to this game is that the player’s ship won’t receive damage when colliding to terrain or enemies, only being damaged by the enemy attacks.

The main mechanic of the game involves the Ironclad, which is clearly inspired by the force pod in the R-Type games. The A button is used for shooting, and holding it will charge the Ironclad’s power. When releasing the button, the blast will detach the Ironclad and send it rushing into the middle of the enemy’s forces with an impressive display of pyrotechnics. Using the pod at the right moment is key to winning boss fights and greatly adds to Ironclad’s fun factor. Interestingly, the portrayal of the Ironclad pod during the charge attack is somehow reminiscent of the robotic satellites of the NES game Shatterhand. 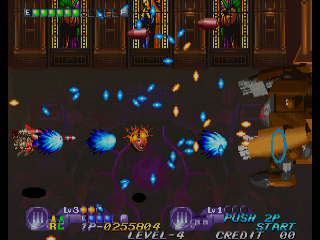 The Ironclad pod has three variations: a drill, a slicing-saw, and a piked bowl. The B button is used to detach the unit or reattach it to the main ship. While the pod is detached, it will cause collision damage to enemies and act as an autonomous, floating ally shooting out its own. While the Ironclad is attached to the main ship, it will block enemy shots but detach automatically after taking enough damage. In most cases, its ability to act as a shield means that you’ll want to keep the Ironclad attached to your ship.

The three ships on offer have different main weapons and separate power-ups are available for your Ironclad and your ship’s weapon. The C button will use a screen-clearing bomb which will consume the Ironclad’s power, only being usable again after picking up a power up for the Ironclad pod. This mechanic makes for some rather strategic decisions and contributes to the depth of the game.

Compared to a game like R-Type or Pulstar which require heavy memorization to progress, Ironclad is much more about maintaining constant movement and finding the gaps to avoid getting hit. There are four difficulty levels on offer and despite never having an official cart release it is clear that an arcade version was planned for, because the fourth difficulty listed is MVS – a reference to the arcade cart version of Neo Geo games. 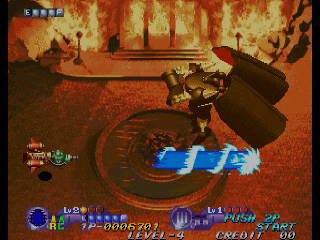 Ironclad‘s difficulty level is nicely balanced and relatively easy compared to most Neo Geo shooters. Regular enemies start out slowly but do become difficult in later stages. The main challenge in Ironclad are the bosses; some of which are very tricky before you figure out their patterns. When you are hit, your power ups are released which you’ll need to collect before they fade away. This mechanic makes it possible to recover after taking damage.

Replayability is without doubt the game’s major strength. The game features branching paths, much like in the Darius games. After clearing a stage, the player can choose between two different stages to play next on a map. In total, no less than fifteen stages exist, and you’ll have to clear six of them to finish the game. There are five different final stages, though the player will always face the main villain Grim as the final boss. Each of them will lead to a different ending. Overall, Ironclad was clearly designed to be completed several times, at least to see all the different routes and endings and try the three ships and their arsenal of weapons.

Even among the library of quality shooters it has to compete against on the Neo Geo, Ironclad is unique and fun enough to hold its own. While it lacks the production values of heavy hitters like Pulstar or Blazing Star, particularly in the graphics department, Ironclad is an interesting mid-tier shooter with considerable depth and lots of replay value. Recommended for fans of the shoot-em-up genre.