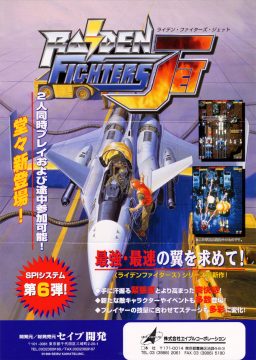 Raiden Fighters Jet is the apotheosis of the Raiden Fighters trilogy and arguably one of the greatest arcade shoot-em-ups of all time. While its style of play is similar to its two predecessors, it refines the formula to a level that borders on nigh-perfection. Raiden Fighters Jet‘s cast of planes and jets has been altered very little from Raiden Fighters 2, introducing only one new fighter into the fold. Almost every fighter from the previous game returns (including the Slaves and the Fairy), sans the Aegis II-c and Dark Sword. In their place is the really cool Ixion, the fighter prominently featured in the title screen. The Ixion has a powerful main cannon and is one of the fastest ships in the game, with straight flying napalm missiles that leave blue explosions and a neat “cyclone beam” that fires up to four lasers which cycle over each other. Unlike the two previous games, all ships are available for immediate play. Aside from some color changes in the weapons, all fighters function as they did in RF2. 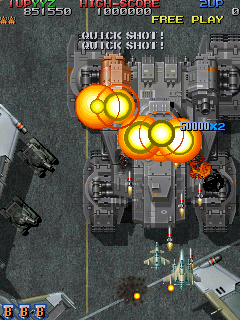 Raiden Fighters Jet‘s end stage scoring system is based on your overall ability (how many enemies you blow up, how often you die, etc), as well as medals collected and “technical points,” earned by destroying a lot of enemies, not dying, and finding bonus Miclus and Fairies hidden in each level. It also has a fascinating method to earn you ridiculous amounts of points if you can stay alive long enough. If you have at least one Slave ship on your side, a point medal might come floating through the sky and follow you around, just out of the range of your Slave. The medal can be collected, but if you don’t move too fast, it flies around you. If it comes into contact with other medals, it absorbs the medals to become larger and more elaborate. If it collect enough medals (about twenty or so), it becomes ludicrously ornate with a purple color and is worth well over two million points if collected. However, snagging this “uber-medal” also causes all other point medals to transform into the glowing X-Medals from the previous games, a single one of which is worth massive points.

The stage structure is significantly different from the previous two and actually plays upon a unique framing device for your actions in the game. Apparently, you’re not actually fighting terrorists, but rather testing your pilot skills in an advanced simulation program. This program apparently has fifty overall levels, though there are really only ten of them in the game. Of course, you start off on level 1 (enemy airfield), then head on to “level 5,” (mine) technically the second level but billed as level 5 within the game’s fictional context. The level branch occurs at the third level, where you either move to level 10 (beach) or level 15 (jungle) depending on how many technical points you receive. Doing badly puts you onto level 20 (desert) and level 35 (orange sky), and after beating 35, you are judged as not being worthy and cruelly have to start all over from level 1. Doing better takes you to levels 30 and 40 (a canyon and an ocean, respectively), with a potential end stage being level 50 (arctic wasteland), which nets you an okay-but-not-great ending. 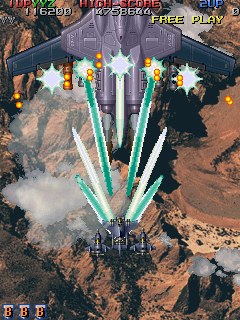 If you do super-well, you move into the vicious level 45 (icy river), and from there, you head on into the “Real Battle,” which consists of two phases (an ominous red skyline and the enemy base) and naturally leads to the game’s best ending. Phase 2 just might be the most brutal moment in the entire Raiden series, longer than the final stages of the previous two Raiden Fighters games and ending with a horribly evil boss, a mobile fortress that somehow moves fast for its size. If you managed to beat Phase 2 without dying at all, you move onto the true final boss, an experimental aircraft poised to launch a dangerous payload. An interesting thing about Real Battle is that no matter what fighter you chose in the simulation, you pilot the Ixion. It brings to the table Ixion’s magnificent speed and powerful main weapon, but you get the sub-weapons of whatever fighter you had when you beat the last stage. This condition appears to only exist through some sort of setting in the dipswitches, but it’s neat and kinda bizarre to see one plane take on the properties of another.

It may be called Raiden Fighters Jet instead of “Raiden Fighters 3” due to the fair amount of bosses that have been recycled from the previous two games. It may be seen as somewhat lazy in a sense, but this is only a minor quibble that has little affect on the game’s overall good design. For example, one of the final bosses (if you do poorly and end up in level 35 as your final stage) is the gigantic bomber fortress at the end of stage six in the original Raiden Fighters. The last boss of the ending level 50 (if you do good, but not good enough for Real Battle) is none other than Red Eye, the final boss of Raiden Fighters 2. The bosses’ patterns appear to be somewhat different than their games of origin, and there are still several new bosses to challenge you. 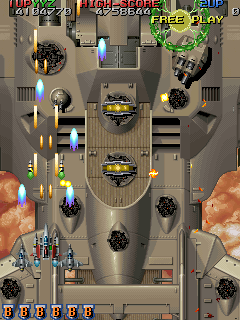 There’s not as much to say about Raiden Fighters Jet compared to the other two, simply because the series at this point has reached its peak. Taking the best elements from the first two games and refining the gameplay has made arguably the best game ever with the Raiden name on it. Perhaps the only possible complaint against it can be the music, handled by a different composer than the first two games. It is still techno music fitting for a shoot-em-up, but not quite as bold or hard-hitting as the sound of the previous RF games. It still fits the game and certainly has no negative bearing upon the game, be it one player or two. On that note, the two-player hybrid charge attack has been changed from a large twin laser beam into a massive explosion of large multicolored projectiles, very impressive and even more effective than Raiden Fighters 2‘s combination attack. Like Raiden Fighters 2, it also has a rough Expert difficulty and a Special boss rush, both of which are also available on the Raiden Fighters Aces collection. Also on the 360 version is a Full Run which has you take on every single stage in the game, quite tough but can be useful if you have trouble finding stages that require more effort to reach.