Those dastardly Crassanians are causing more havoc, and it’s up to Raiden’s pilot (i.e., you) to send them back to the asteroid belt out of which they materialized. Released three years after the first game, Raiden II offers more challenge and intensity than the first as all good sequels should do. It ostensibly looks a lot like the first game with marginal graphical improvements, and admittedly, it does not do much to change the basics of the first. Then again, the old adage “if it ain’t broke, don’t fix it” certainly applies to this case. The few additions and changes that exist only help to augment the simple-yet-intense playstyle for which Raiden is known. 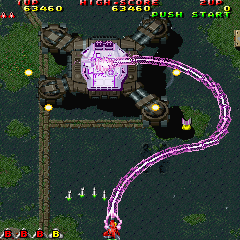 First off, the levels appear to be slightly more diverse in terrain and appearance, similar to the conservative natural look of the first game but with a bit more color in the landscape. Neat touches are abound in the graphics, like the scant pieces of debris that fly around after destroying enemy vehicles. The sound design is essentially the same as the first with a new original soundtrack that’s just as kickass as the first with a bit less repetition to boot. The oddly named “Flap Towards The Hope,” the first level track, is just as memorable and heroic as Gallantry from the first and sets the mood for the rest of the fight ahead. The levels take place over a rural mountain range, a residential town, a naval base, an abandoned ancient city (like the fourth stage of the first game), a fortified enemy airport, an enemy-occupied planetoid, a steel space base, and the newly-located Crassanian main headquarters. Some of these scenarios are similar to the first game but have a bit more detail, and they certainly up the ante in terms of enemy intensity. 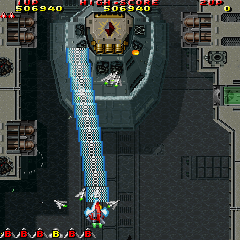 As in the first game, you get either a wide shot or straight laser for your main weapon and either napalm or homing missiles for your secondary weapon. Raiden II introduces a third main weapon that is one of the most badass armaments in shoot-em-up history. The icon for it is colored purple, and it starts out shooting a quick stream of lasers before merging the lasers together into one long completely unbroken plasma beam. Affectionately dubbed the “toothpaste laser” by shoot-em-ups.com, this long purple rope of death sways as you move left and right to sweep over fodder. If you hit a large enemy, the plasma beam locks onto them and drains their life to nil. Any other enemies who touch the beam while it is locked on will still take damage. Sometimes, the beam grazes multiple targets at once, bending and looping around several times, eclipsing the terrain below in curls of purple death. This is a really damn cool weapon, albeit more difficult to properly use than the red or blue ones. 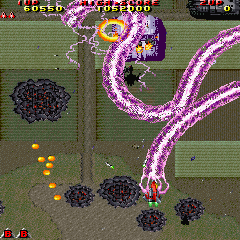 In addition to the classic large-explosion red nukes, you can also pick up yellow B icons that give you a really awesome cluster bomb. You drop about thirty small bombs at once that drop off in a large radius around you to cause a fantastic cascade of explosions. This is less powerful than the standard circular explosion, but compared to that style of bomb which has a delay before explosion, the cluster bomb fires out almost immediately and is thus better for blocking out enemy fire. Both types of bombs count up as multipliers for the end of stage score, as do the good old five-hundred point medals which, as before, are uncovered by tearing up the scenery. Miclus and Fairy remain as bonus items that do not count up to the end-of-stage bonus, 10,000 and 30,000 respectively. Occasionally, after dying, a Fairy pops out and grants you several weapon icons to help you power back up. 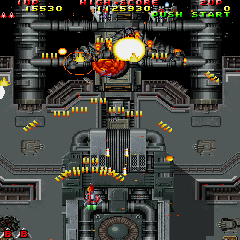 Medals still count as one thousand points to the end-of-level bonus. New to the game are “super medals,” which look as if they’re made out of glowing crystals and are worth three thousand points on base. They grant five thousand points alongside the one thousand points offered by the regular medals at the stage bonus, all taken in total with the score multiplier from the bombs. Leniently, the medals still count if you lose a life, unlike the first game where credit for medals was removed after death. You DO lose points for medals if you have to continue, but you can continue on the spot instead of heading back to a check point as in the first game. Still, In terms of dodging projectiles, Raiden II‘s just as tough as its predecessor, perhaps even more difficult with the increased amount of enemies you’ll be facing. The smaller enemies become more desperate to destroy you in later stages, with helicopters and futuristic jets practically dive-bombing you in addition to spitting out bullets. Larger enemies such as enemy tanks and battleships fire quick star-shaped projectiles at you in addition to the normal orange bullets. Once again, Raiden proves itself here as the forefather of the bullet hell. 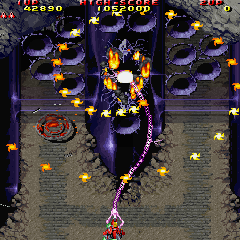 With the cool and unique bosses of the first game, the sequel had to up the ante and pit you against even bigger and more terrifying machines of war. Each boss has the Crassanian emblem of a red diamond built into their constructs, and you’ll actually see a red diamond fly out of each boss after you obliterate them. The first stage pits you against a large spider-legged tank before introducing you to a second spider tank, much how the first game unnerved you with two regular big tanks. Stage 5’s boss is particularly impressive with three phases; it starts off as a giant ship slowly blasting off from a runway, but as you destroy it before it can even leave the ground, it launches out a smaller (but still much bigger than you) aircraft that’s even deadlier, whose blue armor is blown away to reveal an even more vicious red jet fighter! The finale at the Crassanian Headquarters reveals none other than that damned red diamond as the final boss, and as it has nowhere to fly away now, it blitzes you with a myriad of projectiles as it summons smaller diamonds to help give a bad end to your long journey. 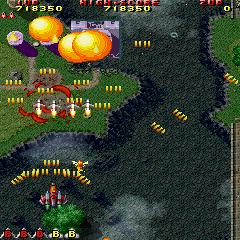 Even with just one player, the game is a hell of a challenge and a well-designed shoot-em-up without any prominent faults. Naturally, having a second player makes it kick even harder, particularly as you can still combine your firepower to shoot off incredibly damaging yet unpredictable starbursts that fly around every which where. A small difference that player two has between player one is starting out with three yellow cluster bombs as opposed to three red nuke bombs. Raiden II is all the first game was and then some, and the two-player experience makes it just that much greater. Though Raiden II may be better than the first, it is unfortunately relatively light in home ports compared to the original. 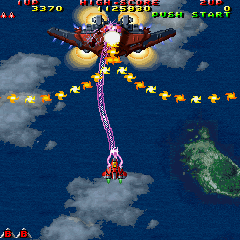 Short of finding an actual arcade cabinet, the best bet for playing the game at home is on The Raiden Project, the PlayStation compilation of the first and second Raiden games. The port is just about flawless save for a few loading times in between levels, but they’re relatively incremental. As with the first Raiden, it offers remixed music, four difficulty levels, and the “tate” option to play the game sideways (only in the Japanese version without hacking it), though credits are limited to a maximum of nine. This could make two-player games a bit tricky as credits are shared among both players, but two shoot-em-up experts should be able to bear with it. There was also a PC version released for Windows, which also plays more or less close to the arcade version. 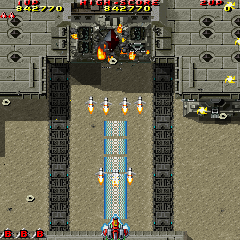 Additionally, there’s also a “New” arcade board, which was only released in non-Japanese territories as a budget product. This rebalances the game to be a bit easier, and also flips the stages in a different order. However, they cheaped out on the sound hardware, resulting in almost all of the music being the same irritating loop throughout all of the stages. The idea is that, this being a low price product, no one would hear the music in a loud arcade anyway, so why care? Unfortunately this may prove a problem for arcade board collectors, so be sure to verify that you’re not getting one of these duds.