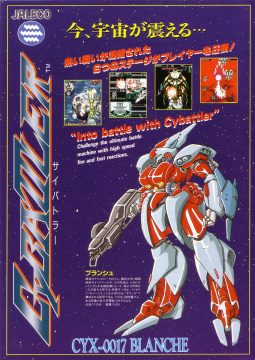 Given Japan’s penchant for giant robots, it’s no surprise that there are a great many mecha-based Japanese shooters. More often than not, however, these are simply reskinned versions using similar gameplay; while you’ll find yourself piloting a mecha instead of a plane, the mechanics are functionally the same save the possible addition of a ‘turn’ button, as in Capcom’s Side Arms and Banpresto’s licensed Mazinger Z shmup. The little-known Cybattler, a solid shooter in its own right, takes a different approach – mixing a shooter’s auto-scrolling background and a smooth, elegant method for attacking in any direction. 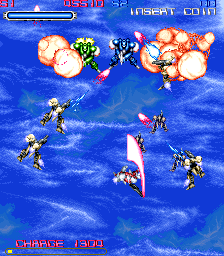 Cybattler was released in arcades in 1993 by budget producer Jaleco. Its attract mode gives a brief overview of the technical specifications of your mecha – a seven-meter-tall war machine confusingly dubbed “Blanche” – and some of the early bosses, but no real information about the plot. As near as I can tell, the game chronicles the battle between humans and the titular Cybattlers. You – and apparently a number of other, similar mechs – will fight your way through six stages, battling all manner of enemy mecha on the way.

The first interesting point about Cybattler is that Blanche’s loadout varies from stage to stage – it’s always got some sort of gun and a beam sword, but there are a couple different weapons you’ll be using over the course of the game, and on some stages your mech also comes equipped with missile pods or a shield which offers some protection from enemy fire. The different guns mostly function the same way, and to a certain extent seem to be an exercise for the designers in giving you weapons that are weaker yet sound more impressive – the “Beam Launcher” you’re given in the first stage is substantially more powerful than the “Beam Gatling Gun” you’re given in the second, and – somewhat bewilderingly – the “Twin Beam Launcher” you’re given in the third. All guns are automatic, and will ‘charge up’ when not being fired, making the first handful of shots significantly more powerful. On all stages, Blanche is also equipped with a beam sword for close-range attacks- this is short-range, but fast and powerful. You’ll find yourself in melee range fairly frequently; instead of blindly flying in formation, enemies tend to dart around the screen a little before leaving, and contact with enemies alone will not hurt you. The balance between these two weapons is actually pretty good – the sword is powerful enough that tapping the ‘melee’ button is a good way to clear out crowds of enemies, but it’s not so overwhelmingly powerful as to make the missile weapons pointless. 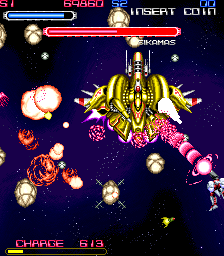 Although the game mostly does away with powerups, there are plenty of pickups available, varying from stage-to-stage. One stage, for example, provides a number of extra, free-floating option pods which will supplement your normal attacks. Another provides a huge cannon that you can ride on which, while powerful, can be destroyed by enemy attacks. While there are only a handful of these ‘special items’, they provides a bit of variance between stages. Sadly, these largely fall by the wayside halfway through the game; it’s something that it would have been nice to see more of.

The second interesting point about the game is the control scheme – unlike most shooters, in which your weapons are restricted to firing straight up or forward, Cybattler allows you to turn and fire in any of eight directions. Furthermore, Cybattler has a unique, surprisingly intuitive way of allowing you to fire in a given direction and dodge at the same time – whenever you’re holding down either of the attack buttons, Blanche will continue to face in the same direction and strafe instead of turning. As someone who has always found most of the methods of handling multi-directional scrolling – including the Robotron 2084 two-stick style and especially the rotating sticks found in Forgotten Worlds and many other early 90s-era arcade games – incredibly difficult to manage, it surprises and disappoints me that this simple, intuitive method isn’t used more often. 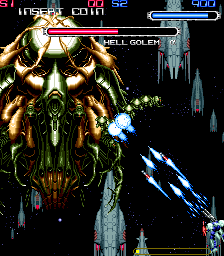 The game is not without its faults; its presentation is fairly mediocre, it’s short, and its difficulty is uneven. Most of the stages take place in outer space, and while some effort has clearly been made to differentiate the stages, it’s not really enough – at a brief glance, there’s not a whole lot to set the first stage’s asteroid city apart from the third’s minefield or the fifth’s enemy fleet. On the other hand, there are a couple standout stages and scenes- the second stage takes a hint from R-Type and consists of a running battle against a giant tank on the lunar surface; it’s sets the stage apart from the rest of the game. The final battle is a dogfight against a single enemy robot during reentry into Earth’s atmosphere – it’s a cool, memorable stage. For most of the game, you’ll also be fighting the same half-dozen varieties of generic enemy mecha; while the game ends before this becomes too repetitive, some more variation would have been nice. While the game’s mecha designs aren’t bad, they’re not particularly standout, either, and one boss in particular – the inexplicably biological Hell Golem Alpha – doesn’t seem to fit with the rest of the game’s mechanical designs. On the whole, apart from a handful of very nice ‘cutscene’ graphics, the sound and graphics are unremarkable – quite frankly, they don’t stack up particularly well against some of the year’s Super Nintendo games, let alone competing arcade titles like Batsugun or In the Hunt. 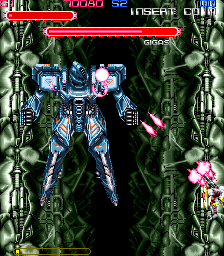 The game’s difficulty level is a bit strange due to the way continues are handled – like R-Type, the game uses a checkpoint system when only one player is active, but if two players are playing, either can continue at any time as long as the other is alive. This makes the game much, much easier for two players to complete – especially considering that many of the early bosses seem to be designed assuming only one player is in the game. This makes a bit of a dichotomy between playing with one and two players; it becomes a game which is frustratingly hard for a single player, but fairly easy for two players. Given the rate at which two players can burn through the lifebars of even the toughest enemies, I doubt that it would take more than a fistful of quarters for a pair of moderately skilled players to blaze their way through the game.

Cybattler didn’t make much splash in the arcades, and apparently not enough to warrant a sequel or port to any home console. In part, this is likely due to the game’s weak presentation and relatively low difficulty in two-player mode; it also had the misfortune of being a shooter at a time when shooters were rapidly giving way to 2D fighting games as the kings of the arcade. It’s still an interesting bit of history, and has enjoyed a bit of a following with the rise of emulation. Cybattler is a fun, worthy game that puts a number of interesting twists on the shooter formula, and certainly worth playing.