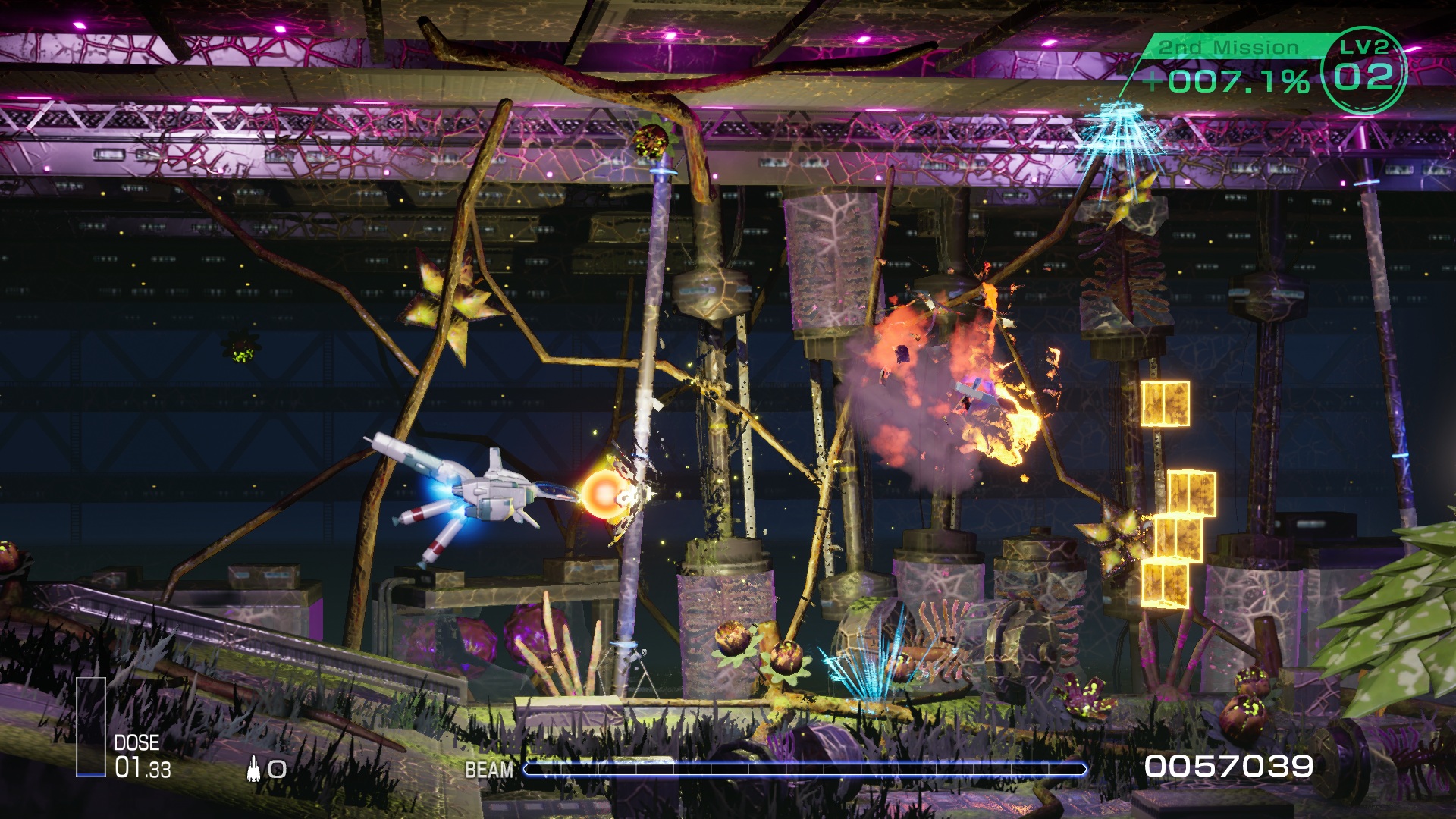 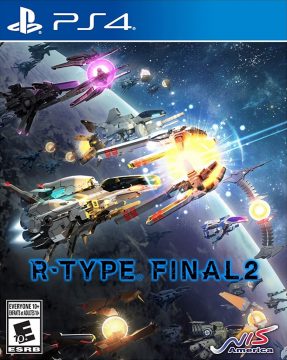 When R-Type Final was released on the PlayStation 2 in 2003, it was designed to be the bookend for one of video game’s most prominent shoot-em-up series. And it was, for awhile, outside of a duo of strategy games for the PSP and an HD remake of the first two games. But words like “final” carry little weight, if a certain long running RPG franchise has anything to say about it, and 18 years later, we have R-Type Final 2. It was developed by Granzella, formed by former Irem staff members, including director Kazuma Kujo, who successfully crowdfunded it in 2019.

The R-Type games have a fairly substantial backstory regarding humanity’s fight with the Bydo. This entry does not bring them back, technically; it states that the victory against them in the previous game was indeed final. Instead, you’re meant to be a historian, constructing a war record of previously unknown battles. An interesting idea, to be sure. 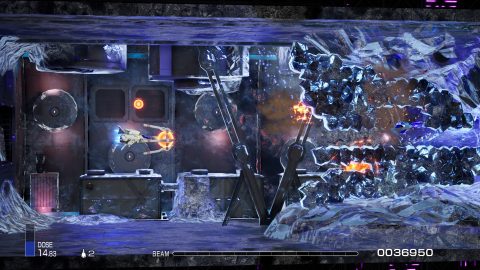 Given the title, it’s unsurprising that this game is most similar to the first R-Type Final in the way it looks and feels. It’s still 2.5D, though now in widescreen with high definition visuals powered by Unreal Engine 4, and it has a similarly stark color palette, contrasting with the colorful visuals of the 2D games. But it’s also conscious of its direct predecessors flaws and fixes most of them – the level design is much tighter, where previously it tended to be rather meandering, and the rampant slowdown is alleviated as well, though the Switch version does have some technical issues that result in regular frame drops.

The original R-Type Final tries its best to elicit a moody and oppressive atmosphere, but ended up looking dark and murky instead. This sequel is much more successful, not only due to better artistry but also due to technical improvements. While often subtle, the lighting effects are incredible, particularly the shadows created by the rotating Force Orbs. The background details give off an aura of otherworldly creepiness, in a way that’s both fascinating and unsettling. 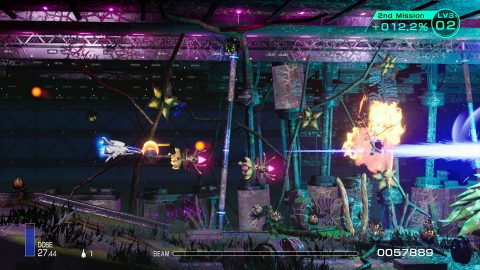 The music is also an improvement. R-Type Final’s music was so muted it was barely there; in contrast, Final 2‘s music is still a little quiet, at least at the default volume settings, but the low key techno has more energy without being overpowering. It’s still not quite as memorable as the old games, but it is fitting for the type of game this new generation R-Type of aiming for.

The stage design is a bit inconsistent, though. The first half of the game has some interesting concepts, but they feel a little samey – a dark spaceship frozen in ice, a dark spaceship overrun by plants, a dark spaceship covered in biological goop. The Dobkeratops, the first stage boss of the first R-Type, appears encased entirely in ice, though it appears completely thawed on the highest difficulty level. There’s a trademark R-Type encounter against a gigantic battleship, but it’s strangely boring and low key. Some areas look gorgeous, others are strangely stark. 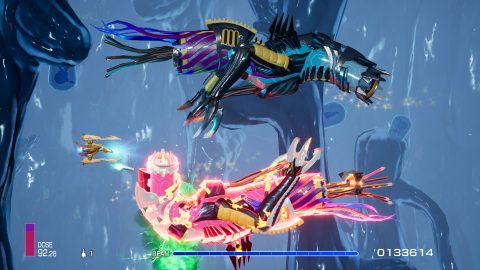 The game’s second half is more ambitious. Near the end of the fifth level, an underwater crystal cave, a ship will drop four colored orbs, which will determine which of the three branches you’ll take to the finale. These have some of the best levels in the game – Stage 6.1 is a series of ruins with neon lit backgrounds, and is much more colorful than most of the rest of the game, and Stage 7.2 is based on the later areas from R-Type Command, the PSP strategy game, and it’s neat to play through it as a proper shoot-em-up stage. Stage 6.1 turns your ship into a Bydo and sends this single craft off to destroy a fleet of humans. It has a hugely impressive scale, though due to the camera angle constantly swerving about, it’s a pain to determine hitboxes. But the coolest is the ship graveyard that consists of thousands of destroyed R-9 ships, some encased in goo and attacking you. It’s weird and unsettling, in the way that the best R-Type levels are…it’s just unfortunate that the early stages aren’t quite as compelling.

The same goes with boss battles – this is a series that was long known for bizarre and terrifying boss designs, most of the actual enemies just aren’t all that impressive. There are exceptions, of course – one of the bosses looks like a clam that surrounds itself with coral that looks like bundles of nerves, is one of the coolest in the game. But together with the undercooked levels, it creates an overall experience that feels somewhat unpolished. 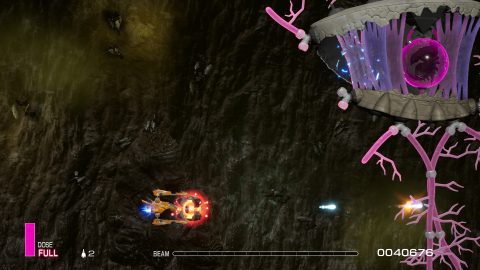 As with the first R-Type Final, one of the biggest aspects involves unlocking the 90+ ships. Many of these are just small variations on one another, but they’re a lot of fun to experiment with. Some of them, especially the ones with homing Force pods, can also make boss encounters trivial. But since the game still maintains the high level of difficulty that 1980s shoot-em-ups were known for, it doesn’t feel too bad to cheat every now and again. There are four types of currencies obtained when playing the game, most of which are used to unlock the ships, though some are obtained through different means, like passwords. There’s also a hilarious amount of customization, including the ability to put all kinds of labels on your ship. You can even alter the game’s title, if you’d prefer it to be called “R-Type IV” or something like that.

R-Type Final 2 is one of the very few shoot-em-ups to use a modern day DLC setup, even offering a Season Pass that promises more levels and ships. The first level DLC pack includes remakes of the lava level (stage 4) of R-Type III and the ruins level (stage 5) of R-Type Leo, completely with remixed music, with more to come. That’s not to say that it was released unfinished, though – the main game is seven stages long with eleven stages in total, so it’s quite a bit longer than any of the previous games, even if it doesn’t quite have as many level variations as the first R-Type Final. But it’s also hard to make an overall judgement of the game until it’s complete, because they may very well patch in some extra stuff or fix some of its issues. In its initial state, the game is a definite improvement over the original Final, but like its predecessor, it’s still a little rough around the edges, and you can see it struggling with its limited budget. Still, it’s a welcome return for a series long thought dead.