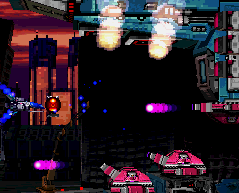 In the late ‘90s, 3D video games were greatly overtaking the popularity of 2D, resulting in the downfall of many arcade genres like beat-em-ups and shoot-em-ups. Some developers tried to adapt these classics by bringing them to the third dimension, with varying degrees of success. In mathematics, “delta” stands for “change”. And thus, that was the title given to the fourth canon R-Type game, indicating the move from 2D to 3D visuals. In spite of using polygonal graphics, it keeps its 2D gameplay.

There are three ships, each with their own unique weaponry and Force pod, as well as a different main cannon, making for an even greater variety than R-Type III. The R-9A2 Delta is the same as all of the other R-9s, of course. The RX-10 Albatross has a powerful burst that decimates anything on its path, as well as a Force pod that grows tentacles that can fire angled lasers, and homes in on enemies when detached. The R-12 Cerberus has an auto-aiming lightning strike as its main attack, as well as a Force pod that anchors itself onto whatever it hits, connected to your ship with an electric beam that can also destroy enemies. The POW Armor, the same one that normally delivers your weapons, is also a hidden playable fourth ship, though it’s similar to the R-9A2.

Each also wields the “Delta” weapon – the more enemies you defeat or bullets you absorb with your Force pod, the more energy you gather. Once you’ve built up enough, you can unleash a bomb to attack everything on the screen. One might think this would make the game easier, but it really doesn’t – it’s still as difficult as ever. You start with limited continues, though you gain more over time, and eventually unlock infinite credits after several hours of play. 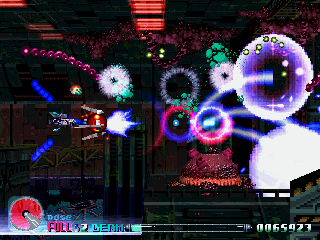 On a technical level, the visuals aren’t quite as clean as other similar PlayStation shooters like Einhänder or G-Darius – the game is overly dark and the textures are rather pixelated. However, the amount of detail put into each and every corner of every stage enhances the overall look of the game, and puts R-Type Delta in a class of its own. Enemies shatter and explode into individual polygons when killed. The Force pod provides its own light source, illuminating the surrounding darkness. And while there’s a fair bit of slowdown during boss fights, the frame rate otherwise keeps up at a slick 60 FPS. Occasionally the camera uses the extra dimension for dramatic effect, when the landscape flips and turns, or when gigantic mechanical worms leap out of the background. While the changing orientation can occasionally be confusing, your ships are no longer damaged by terrain, lessening many of the potential problems.

The level design is some of the best the series has ever seen. Echoing the legendary battleship stage from the original R-Type, there’s one stage devoted to taking down a huge walker, similar to the AT-ATs from The Empire Strikes Back. Another stage is a biological wasteland, as you fly through some semitransparent liquid. It doesn’t affect your ship’s movement, but it does affect everything else, including the POW armors, which float along haplessly. Here you fight remnants of old R-Type bosses, wrecked but still functional, floating around haphazardly. These include the ring of lasers found halfway through the first level of R-Type, and the Gomander and its tentacles, now detached from its surface. In the next-to-last stage, you return to your home base, only to find it overrun with Bydo. You revisit the hangar from the ship selection screen, only to find it infested with Bydo, and you must destroy the other two ships before facing off with an encounter with the Dobkeratops, looking more vicious than ever before. 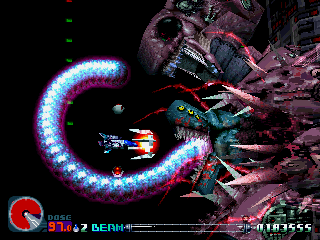 The final stage is particularly bizarre, filled with floating mathematical and chemical equations, evil crystal-encased babies, giant strands of DNA, and digitized images of astronauts. All the while, you’re being attacked by what seems to be a gigantic red egg that attacks with malicious sperm. In a particularly dark move, while you get the usual happy ending with two of the ships, the third ship, the Cerberus, will remain trapped in the Bydo universe – you get to fight it in the sequel, R-Type Final.

The music was provided by an audio production team called Unlimited Sound Project. It has a significantly different feel than other shoot-em-ups – an electronica score that’s both atmospheric and cinematic. Each song is exactly the length of the stage, with each section attuned to a particular segment. Even when you die and restart, the track restarts at the appropriate place. Like R-Type II, there’s a level that’s submerged in water – here, whenever you dip beneath the surface, the music changes to a subdued version of the stage theme. There are two boss themes, one for biological creatures and another for mechanical ones. 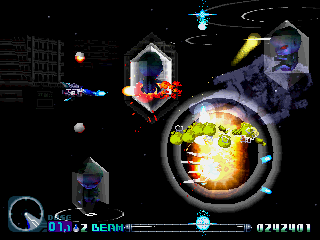 While R-Type Delta can be criticized for the same things as all of the other games in the series – the high level of difficulty and required memorization – but within its own context, it’s not only one of the best in the series, but one of the best shooters ever created. Its atmosphere in unmatched, its levels are beautifully crafted, and the differences between the ships require enough varied strategies to make it extremely replayable.

While R-Type Delta was featured on the PlayStation Network as a downloadable title, it was delisted in 2013, with seemingly no plans to return.

In the Hunt
Night mode