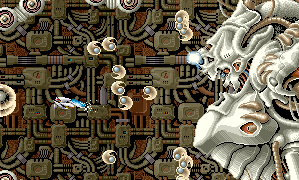 R-Type II opens up with a bang, a 3D view of the R-9C launching out into space and out into the fray. Unfortunately the intensity doesn’t last long, as here the series enters its sophomore slump.

In many ways, there’s nothing really wrong with R-Type II, but it is rather unambitious, as the game plays almost exactly the same, and runs on the same hardware. You can now charge up your beam for a few seconds longer for an even more powerful shot that has wider range, and there are now two new extra weapons. But otherwise it’s the same as it ever was. The learning curve is even steeper, as it gets remarkably difficult in just the second stage. 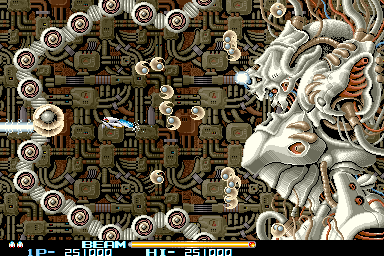 The stages themselves are technically just as well constructed as the original game, but they seem to be lacking something. A large part of this is due to the darkened color palette, which consists mostly of dull browns. Most of the designs are also more mechanical and many areas generally lack the biological influence of the earlier game. The bosses are nowhere near as memorable either. The music is pretty decent at least – the first level tune is high energy, even if it sounds a little blippy, and the second level song is one of the moodiest R-Type themes ever composed.

There are a number of cool moments, at least. The second stage is a cave, with the lower half filled with water, with similar levels featured in later R-Type games. The most frustrating part are these creatures which zig and zag diagonally in a haphazard manner. Once you shoot them, they immediately careen straight in the direction they were flying. The third stage puts you against a minor fleet of gigantic battleships. Taken separately, they’re smaller than the cruiser in the third stage of R-Type, but it’s really harrowing to fight them two at a time. The final boss battle isn’t all that impressive, but its weak points are tiny Bydo eggs, and you can see the creepy monsters spinning within. There are also only six levels, though the higher difficulty makes up for the shorter length. 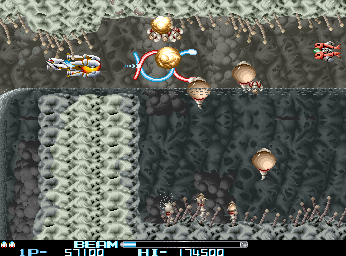 One of the earlier SNES titles, Irem ported R-Type II to Nintendo’s fledgling system, dropping the numeral and adding the moniker of “Super”, as was the style at the time. It’s really not so much a straight conversion as a “remix”. There are seven levels, two of which are brand new, four of which are taken straight from R-Type II, and a fifth which is heavily altered.

There are new bosses for each of these stages, although they don’t quite measure up to the quality of the original arcade version. Various other changes have been made in the stages as well – the cave level (stage two in the arcade version, stage three here) is completely missing water, for example – but has different (and new) bosses. The level with the dragons that dropped blocks in the arcade game (level five) has been completely replaced with a junkyard-like stage. The stage with the battleships has been drastically shortened, but after fighting them off, you fly inside and attack the core from within, facing a completely different boss. These changes are generally for the better, except for the first level, which is just a slog through a boring asteroid field. 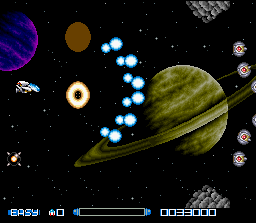 The music quality is better, taking advantage of the superior SNES sound chip, though many of the songs have changed entirely. There’s the slowdown that exists in nearly every early SNES shooter, and the cool 3D intro of your ship blasting off was replaced with a lamer 2D one.

None of these would matter that much, except for the biggest flaw – the midlevel checkpoints are gone. All of them. No matter where you die in a stage, even if you’re at the boss, you’re tossed way back to the beginning. R-Type II was difficult, but making the game even harder was not the wisest of moves. 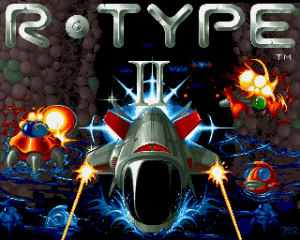 R-Type II wasn’t ported to nearly as many computer formats as the first game, but Activision still released versions for the Amiga and Atari ST, both developed by Arc Developers. The Amiga port is fantastic – it’s missing some graphical details here and there, and there’s some more slowdown than the arcade game, but the music arguably sounds better. The Atari ST version is based on this one, and it’s pretty good too, if a little weaker. It’s a little slower and the scrolling isn’t as smooth, plus the music is substantially degraded. Most noticeably, almost all of the background graphics are cut, replaced with outer space. 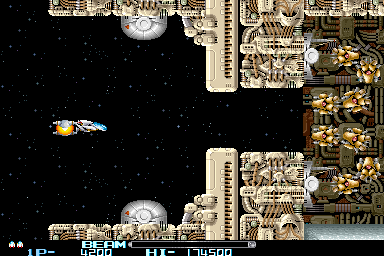 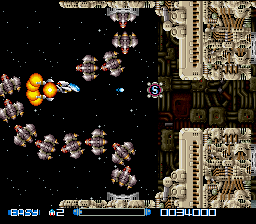 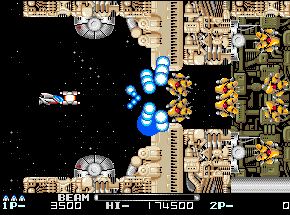 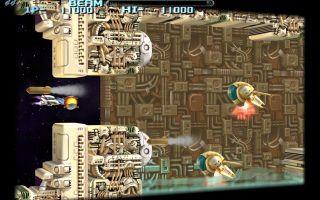