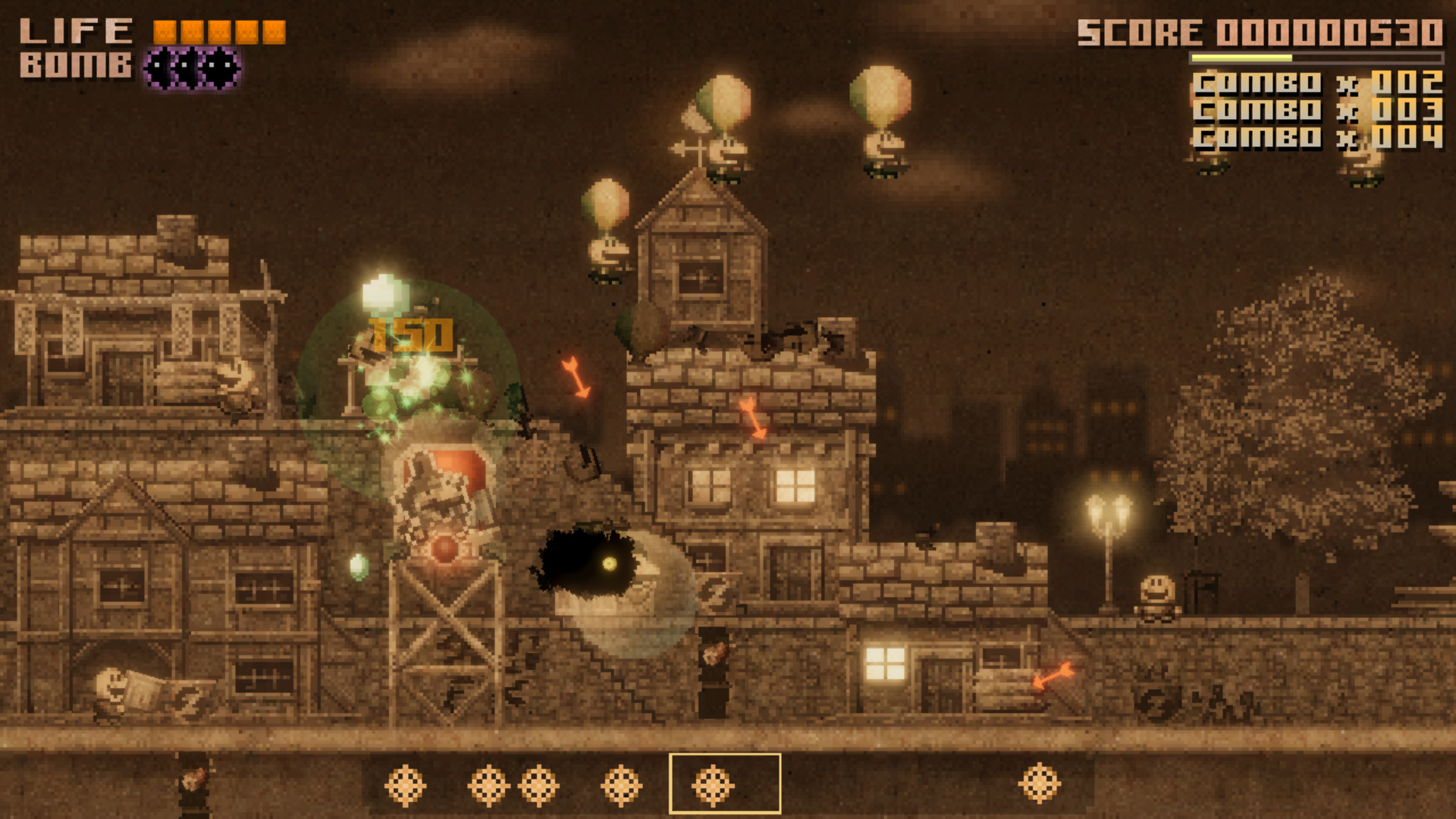 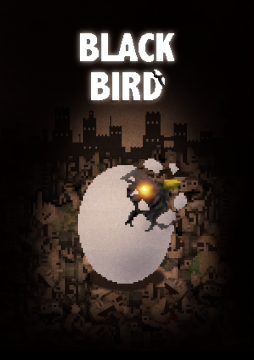 Yoshiro Kimura is known for offbeat games, particularly titles like Moon: Remix RPG Adventure and Chulip. While these titles were sort-of story-based adventures (as much as you could stick them in a genre), his indie label Onion Games has so far been putting out slightly more arcade-y titles like Dandy Dungeon and Million Onion Hotel. His 2018 shoot-em-up Black Bird is, very explicitly, a homage to Sega’s arcade classic Fantasy Zone, which in turn is loosely similar to Williams’ Defender. This isn’t a bad thing, considering how infrequently this style of game has been done, especially when combined with Kimura’s uniquely weird aesthetic proclivities.

It’s hard to really tell much of what’s supposed to be going on the story, but the gist of it is that a little girl has died out in the streets, and has been reborn as a bullet-spewing black bird, apparently bent on revenge against…something. It’s tragic and sad! Said black bird isn’t really a bird so much as a decapitated head with black feathers that shoots killer bubbles out of its mouth. But don’t dwell on it too much! As stated, this is basically Fantasy Zone. As a side-scrolling shooter, you’re given free reign to fly left or right, in a stage that wraps infinitely, with the goal being to take down all of the bases in area. Once they’ve been destroyed, then the boss monster appears, which you fight before heading onto the next stage. 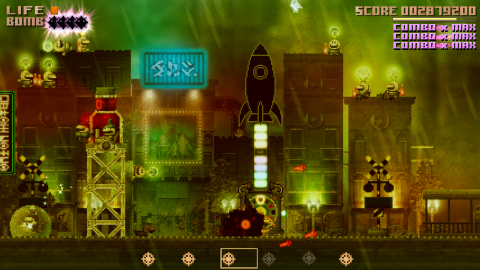 The main difference is that there is no shop, and no extra weapons beyond getting some power-ups for your main shot and accompanying missiles. Instead, Black Bird uses a modern shoot-em-up chain system, where repeatedly killing enemies will build up a score multiplier. The largest amount of points come from destroying bases, so the key to ranking up high scores is by killing standard enemies until your multiplier is maxed out and then take one out. As you gain strength, your bullets become more powerful, and the bird becomes larger. In spite of its larger size, its hitbox is still just its eye, and that doesn’t get any larger. You do have a limited amount of bombs for harrier moments. Whenever items pop out, they cycle between health restoratives and extra bombs, so you can prioritize based on what you need.

At just four stages, Black Bird is fairly short, and on the standard difficulty level, it probably won’t challenge most shoot-em-up fans until about stage three. Plus, rather than using lives, your black bird has a single life with a vitality meter, so he’ll just take damage from getting hit rather than being killed – this ensures that boss battles are generally easier since you don’t need to restart them if you take a bullet. Beating the game will unlock a harder difficulty level, which is probably the level you should be playing at, the initial run through is more of an introduction to teach you the game before really throwing you into the thick stuff. 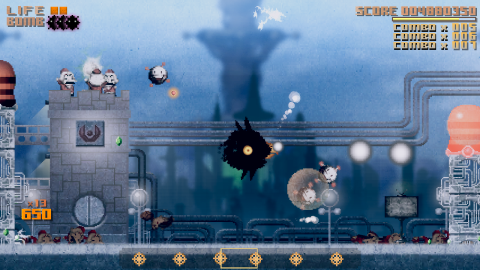 But merely seeing the game to its end is not really the point, because Black Bird excels as a score-focused shoot-em-up. A single run can be completed in less than fifteen minutes, and there are always extra scoring opportunities, methods to keep up your chain, and ways refine your performance. Indeed, there are several endings, based on on a variety of factors, so actually getting the best finale is quite the achievement.

Beyond the mechanics, this is just a gleefully weird looking and sounding title. The style is something out of early 20th century Europe, displayed mostly in dark or sepia tones, constructed entirely out of pixels. Most of the enemies are mustachioed little men that look awfully like the hero from Onion Games’ previous title Dandy Dungeon. They fly around on balloons and such; you almost feel bad killing them (though to be fair, they are trying to murder you first). The art was provided by Kazuyuki Kurashima, who has worked with Kimura on several of his older titles. The soundtrack primarily consists of a choir singing in a nonsense language, setting the whole experience somewhere between “goofy” and “unsettling”. The boss fights are typically baffling, as they typically shatter after taking enough damage, revealing a pilot. Within the comical blimp of the first stage is a rotund, floating man that looks like Santa Claus. The third boss, a gigantic wheel that shoots electricity, is powered by a mouse on a wheel. There’s no dialogue or narration in the game itself, so much of the story, what there is, is left to your imagination. 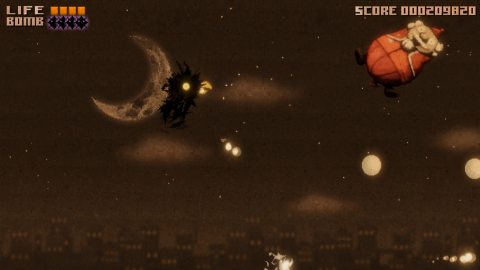 The challenging difficulty level and scoring focus may be a little overwhelming for those familiar with Kimura’s earlier titles, but it’s still worth it for the charming weirdness alone. It’s an essential purchase for shoot-em-up junkies, though, as aesthetics place it in another league from other more typical games, including granting it an identity apart from the series that originally inspired it.