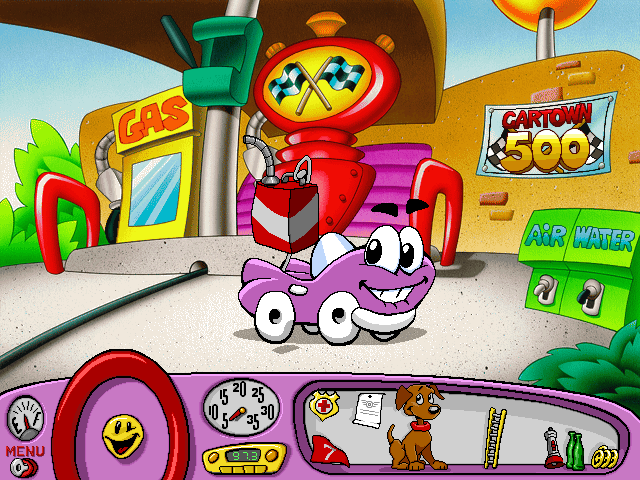 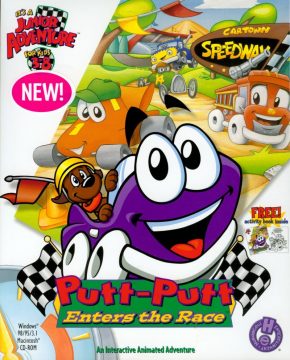 Since his first outing in Putt-Putt Joins the Parade, Putt-Putt went to the moon, saved a zoo, and traveled through time. After these more fantastic adventures, Humongous gave the character a homecoming in Putt-Putt Enters the Race.

Putt-Putt’s hometown hasn’t gotten much attention the first game, and given the series’ growth since then, it seems worthwhile revisiting the locale. Putt-Putt Enters The Race consequently feels a bit like a revision and expansion upon that first game, like Humongous asked themselves, “What’s cooler than a parade? How about NASCAR?” 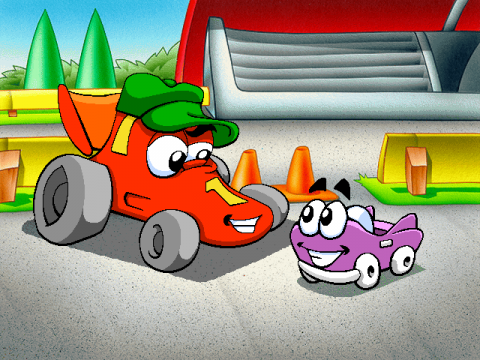 The game is stylistically similar to previous entries, with hand-drawn animation and a colorful vehicular cast. The most major change is probably the absence of Jacob Ellefson, the child actor who had previously played Putt-Putt in every game. Instead, Putt-Putt is played by Nancy Cartwright, best known as the voice of Bart Simpson. This actually marks the second Humongous franchise to feature a hero played by a 90s Fox animation star, as their Pajama Sam character was played by King of the Hill actress Pamela Adlon. Cartwright never sounds quite right in the role to those used to Ellefson’s enthusiastic line readings, but the recasting was likely necessary as Ellefson aged.

The game begins with Putt-Putt receiving an invitation in the mail to participate in the Cartown 500. Putt-Putt, ever eager, heads off to the Cartown Speedway to talk to Redline Rick, a southern-accented Formula One car. Putt-Putt then is told what he needs for the race: a numbered flag, racing tires, high octane gasoline, and a helmet for his puppy. Putt-Putt notes that he can get all of those things in town and heads off.

The first map of Cartown is nearly identical to that of Putt-Putt Joins the Parade, with the fire house, grocery store, car wash, toy store, gas station and paint shop all in place. Just like in that game, Putt-Putt also spends much of this game doing chores. Instead of delivery groceries like in Parade, Putt-Putt picks up crops for Mr. Baldini. The player can also recycle old bottles found lying around that will appear randomly throughout the game’s screens. Money is necessary to buy Putt-Putt’s racing tires, as well as to optionally get paint jobs and carwashes. 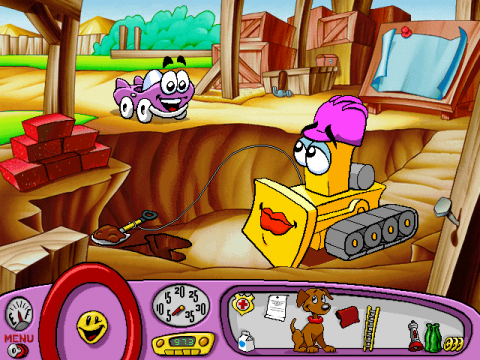 Putt-Putt’s homecoming also means the return of many characters who had bit parts in previous games. Zookeeper Outback Al has a randomized baby animal that needs to be fed in exchange for a racing flag. Mr. Fenderbender, a generic character from ‘Parade’, has to get his cat out of a tree. Even Rover, the rescued moon vehicle from Putt-Putt’s lunar excursion now sells milkshakes at an old-school drive-in. In ‘Parade’, Putt-Putt can accidently run over nails in one area, resulting in a tow truck named Chuck towing him and repairing his tire. In ‘Race’, Chuck can be found at the side of the road with a flat tire, and Putt-Putt must cut Chuck a patch for his wheel in a simplistic minigame. Seeing as Chuck is the only one who can sell Putt-Putt his tires, this activity is crucial.

Like in the previous game, this game also features randomized “paths” for how Putt-Putt’s needed items can be obtained, adding to replay value while keeping game length short and puzzles simple. That said, some of the macguffins in the game are hidden behind pretty simple mini-games, like hammering in nails, digging holes to find missing hubcaps, or rearranging a pile of rubbish. When collecting groceries, the game enters a top-down perspective, similar to previous games’ maze and lawn mowing minigames.

When Putt-Putt has collected all the items he needs, The Cartown 500 begins. This is the first time a Putt-Putt game has actually ended with gameplay, with a simplistic 3D style racing mini-game that can be replayed as much as the player would like. The race is very easy. Putt-Putt accelerates on his own, his horizontal position tied with that of the mouse cursor. The only real challenge is to avoid randomized oil slicks and ducks on the road, as well as the other cars. Putt-Putt can then work his way up from the back to the front of the race. The game’s ending changes minutely depending on how Putt-Putt performs in this race, but either way, the little car is overjoyed by the experience. It’s a nice touch, offering a low-pressure endgame besides just watching a happy cutscene.

One highlight in the game might be its music. Since Putt-Putt Saves the Zoo, each game in the series has used streamed audio to anchor its themes. While ‘Zoo’ featured safari-styled music, and ‘Time’ used a melodic motif between time periods with different instrumentation and arrangement, Race uses its Nascar-esque scenario as a way to fill the game with Americana. The soundtrack is full of short, catchy instrumentals with plenty of blues guitar and harmonica. 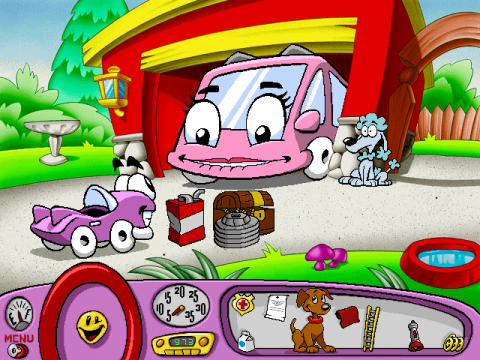 It would be hard to call any game about a talking cartoon car for children grounded, but Putt-Putt Enters The Race certainly does feel like a homecoming for the character. It’s also the last game in the series before the beginning of Humongous Entertainment’s eventual shuttering. Humongous’ parent company GT Interactive was acquired by Infogrames in 1999. In 2000, the company’s founders would split from Infogrames, trying to purchase the company back. When this method failed, many key staff members defected to form the ill-fated Hullabee Entertainment while the focus of Humongous Entertainment would shift towards the more popular Backyard Sports series.

Like other games in the series, Putt-Putt Enters The Race can be found on iOS and Steam, using the SCUMMVM emulator as of 2014.