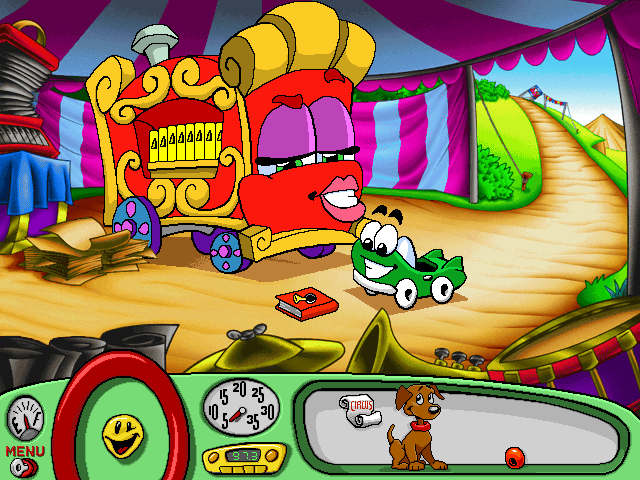 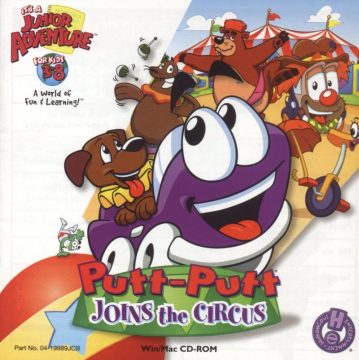 Humongous Entertainment games grew slowly more complex over the years. Series aimed at slightly older demographics, especially the Pajama Sam and Spy Fox series, built more involved plots and puzzles. While Putt-Putt games were built to teach the mechanics of adventure games, these other series built on that groundwork with their own styles. Freddi Fish games centered around solving mysteries, while Pajama Sam used its surreal settings not unlike Where The Wild Things Are.

Putt-Putt Joins The Circus feels a bit more like those games, and other later Humongous Entertainment titles. Its puzzles are more substantial, and its character writing in general is snappier. While still written by Laurie Bauman-Arnold, the identity of the game feels more articulate, something that’s assisted by the game’s acceptance of its small size and stakes. Still, it also feels less ambitious than its predecessors. 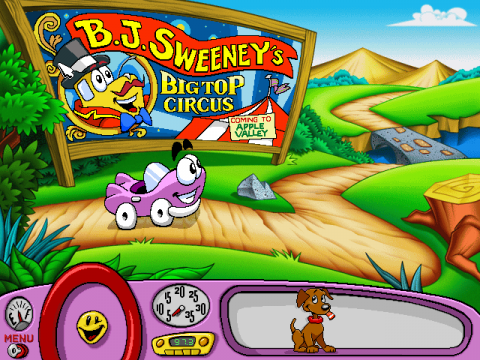 The game begins with Putt-Putt and Pep en route to B.J. Sweeney’s Big Top Circus. The two are on a long journey from Cartown to Apple Valley, where the circus is taking place. They reach a crossing where a train named Cassidy is blocked by a goat. While previous Putt-Putt games would use animals in the road as a way to teach players how to use Putt-Putt’s horn or Pep as a tool, this game asks just a bit more of the player. Instead of just honking or using his dog to chase the animal away, Putt-Putt has to move over to the next screen to the right and pick some wild flowers. Using the flowers, Putt-Putt can lure the hungry goat off the track, but the beast also eats Putt-Putt’s ticket to the circus. Not only that, but Putt-Putt is flat broke and can’t afford a new ticket. The thankful freight train gives Putt-Putt a ride to the circus, and Putt-Putt goes to introduce himself to the Ringleader B.J. Sweeney in hopes that he’ll hear the little car out.

Sweeney is clearly distraught. It appears that the same bad luck that befell Putt-Putt earlier has befallen him, and the circus might not perform at all without an intervention. All of the star performers of the circus are threatening a mutiny. Sweeney promises Putt-Putt free tickets for life if he can fix the situation, and so begins the purple car’s sixth adventure.

Putt-Putt must solve the problems of five key acts for them to rejoin the circus. Honko the Clown Car has lost his nose, and to make things more difficult, he can only communicate by honking a horn. The Flying Porkowskis, a pig trapeze team, have lost their net. Phillipe the Flea, the french leader of a troupe of performing fleas, refuses to work until his tiny damaged tent is replaced. Reginald Cornelius Androncles III, the circus lion, has the wrong costume, and cannon performer Katie Cannonball is missing the schematics for her cannon. 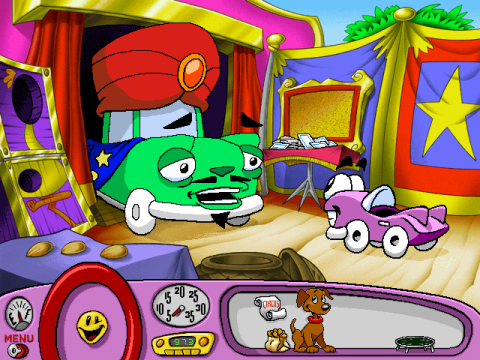 Ultimately, it’s a similar structure to previous games. Putt-Putt has an interconnected hub map, in this case of the circus, and must use acquired items and the occasional minigame to solve puzzles and fill in a checklist. Still, by making Putt-Putt’s goals focused on problem mediation instead of simply collecting items, the game creates a more interconnected experience. The downside of this sense of focus comes at variety. While the past two Putt-Putt games randomized what objectives were actually needed to attain their macguffins, every time you play Putt-Putt Joins The Circus, will be largely the same, with only small permutations on what specific variables will solve puzzles. This is a big impediment on the game’s replay value compared to the past two games, although it also means you don’t need to replay it multiple times to see all of its content. It also means none of the characters or areas are ever relegated to ‘off-path” roles, like some characters and areas in the previous games.

Intentionally or not, later Putt-Putt games tend to pattern themselves after older ones. Putt-Putt Travels Through Time reworked the science fiction of Putt-Putt Goes to the Moon, and Putt-Putt Enters the Race felt like a revision of Putt-Putt Joins The Parade. Following suit, this game’s cast of many animal characters and less branching structure makes it feel like a retread of Putt-Putt Saves the Zoo.

Putt-Putt Joins the Circus embraces the kind of progression of puzzles often seen in adventure games. When Putt-Putt first enters the circus, the star performers aren’t the only ones with issues. Nearly every NPC is having some sort of problem. Belobrodnik the Dancing Bear is itching because the protesting french fleas have taken residence in his fur. Ivan the Semi-Strong Van has lost the recipe for the smoothie that makes him strong. In Putt-Putt Joins the Circus, solving problems then becomes about mediation, solving one party’s problem so you can solve another’s. To bring Honko the Clown his nose back, for example, the player must first get it from a seal by returning that seal’s juggling baton. 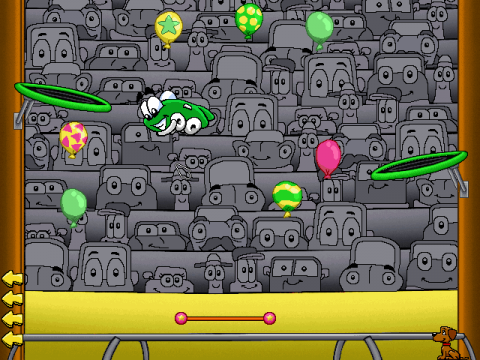 The game also features a couple simplistic minigames. One puzzle requires a pack of peanuts to solve, and those peanuts must be won in “The Peanut Challenge”, a simplistic, slow-paced minigame where the player just has to click on cars that pop up to throw them peanuts. The player gets ten bags of peanuts to throw in this game, and no time limit. Another game mimics the old card game of Concentration, matching up a magician’s overturned cards so he can perform his tricks again with no time or turn limit. Another challenge has Putt-Putt rearrange misplaced pipes in a musical organ to match the Gregorian scale.

One upside of the game’s more compressed setting and less random plot comes to the game’s writing. Putt-Putt Joins The Circus may be the best written game in the series. The dialogue is still written by Laurie Bauman-Arnold, as every previous game has been, but the new characters seem to have a bit more agency and even a little ego, perhaps due to the fact that many of them are performers.

In a series where many characters are nice but bland, this nuance makes a nice change of pace, and not one that makes the character’s less endearing. When J.J. Sweeney remarks, “That’s my life, paperwork,” while signing Putt-Putt a security clearance for the circus’s backstage area, it’s an endearing little line that makes his character more likeable. The same goes for the way Reginald the lion disdainfully regards the bathing suit he’s wearing in lieu of his regular costume, or the anxiety of the Schwarzeneger-like Ivan the Semi-Strong Van. 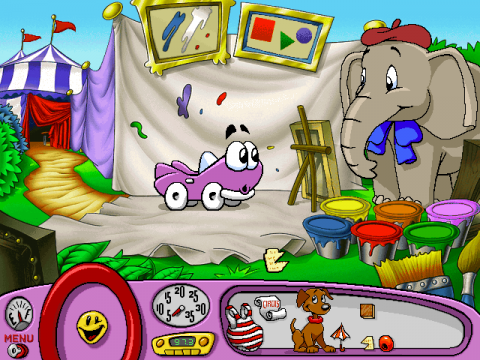 Baby Jambo and Mama Mombassa, two elephants from Putt-Putt Saves The Zoo, return as well. They apparently are spending the summer working on the circus, and Jambo has become an artist. This means Baby Jambo can paint Putt-Putt different colors, as is tradition in the series, but he and his mother are also both proud of Jambo’s work, and the game takes some light comedy out of Jambo and Mombassa’s enthusiasm towards Jambo’s paintings next to Putt-Putt’s polite indifference. Another fun scenario has Putt-Putt tote the flea circus in Pep’s coat, to the puppy’s chagrin.

Outside of solving problems, the game has its share of clickable Easter eggs, including two animals that share jokes with each other, as well as two animated musical sequences. Replays might not add as much variety as previous games, but the game does still feature a lot of optional dialogue and animation like its predecessors.

When Putt-Putt has filled in his checklist of acts helped, the circus begins, and Putt-Putt is asked onstage to participate in the events. Not to be outdone by Putt-Putt Enters the Race’s one ending minigame, this game presents two.

One is a simple breakout-esque game where Putt-Putt can pop balloons, eventually rising to the top of the course by bouncing on player-controlled trampolines. The other is a shooting gallery where Putt-Putt throws pies at clowns that pop onto screen. Neither games have a fail state, and can be quit at any time. 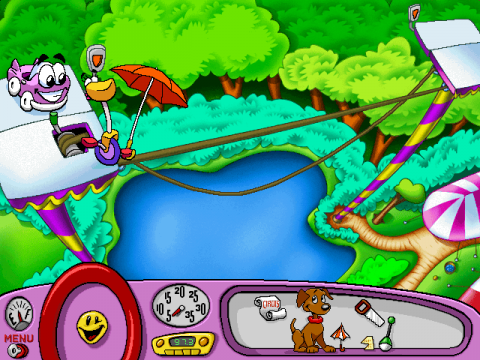 When the player is done playing those games, Putt-Putt presses a button and the circus begins and the credits roll. Putt-Putt Enters the Circus makes some minor efforts to streamline the series, trading some of the ambition of its last two entries for a bit more focus. It’s also a bit of a swan song for the series, for better or for worse. By the next game in the series, much of Humongous’ creative staff would be gone.