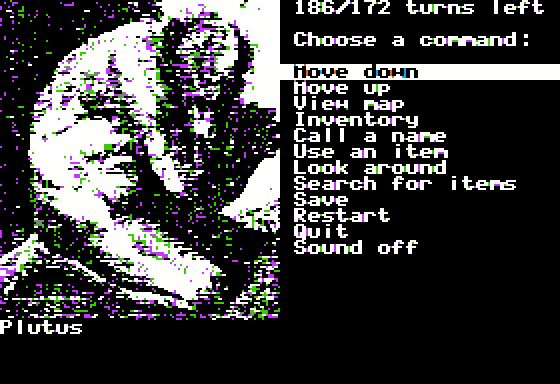 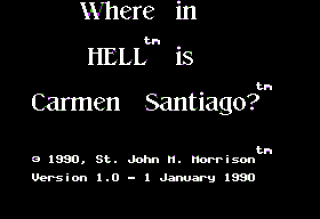 Broderbund’s Carmen Sandiego educational series was immensely popular in the late 80s and early 90s, enough to eventually earn it a PBS gameshow and an animated television show. Each of the games featured the locale where eponymous criminal and her gang would travel, first starting with the entire world, narrowing it down to the United States and Europe, then broadening it through time and even into outer space. A common joke (or utterance of frustration) for gamers was, “where in hell is Carmen Sandiego?” or “Where would Carmen Sandiego show up next, hell?”. One developer, St. John M. Morrison ™, decided to take that literally for their own parody game, Where in Hell is Carmen Santiago?, where the world/time traveling thief (or rather, a similar but legally distinct facsimile named Carmen Santiago) ends up dying and being sent into the underworld, with you having to track her down. The game was not a retail product, but was instead distributed as shareware, typically through computer shows and other community efforts. 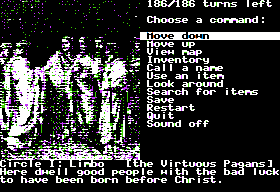 For something that very obviously sounds like a goofy Zucker/Abrahams/Zucker (Airplane!, Hot Shots, etc.) spoof, Where in Hell is Carmen Santiago? takes itself remarkably seriously. Rather than teaching the player about geography or history, the goal is to get the player to learn Dante Alighieri’s epic poem The Divine Comedy. Hell is presented as sort of a simple adventure game, with a linear path down the circles of the underworld, starting with Limbo, with each locations being a separate room.

In each room, you can really only perform a few actions: look for items, use an item, or call out a name. Certain rooms also have guards (Cerberus, Plutus, and so forth), who often need to be satiated with a gift. When you call out a name, you can choose from a list of Carmen’s “gang members” (really various historical figures) as well as Carmen herself. When summoning one of these people, they’ll give hints of Carmen’s locations, though they too often need items to talk (and since they are in hell, they also have a propensity to lie). Once you’ve deduced where in hell Carmen is located, based off her sins, then you can call out her name to confront her. If you pick the wrong spot, you’ll automatically lose, because one of the demons will think you’ve called out “Charon”, who, upon realizing that you actually saying “Carmen”, ends up damning you with the souls of the uncommitted, chasing a banner for all eternity. (The reasoning behind this is rather suspect, as it seems like an excuse to feature this particular section of Hell.) 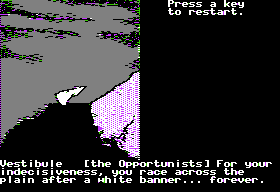 The graphics appear to be illustrations that was digitized to fit within the Apple II’s visual specifications, which make them look like barely intelligible messes. The music is simple beeps that change in each room, sometimes comically…Cerebus is accompanied by “Where, Oh Where Has My Little Dog Gone?”, for example.

This is all very ambitious, but in practice it’s also extremely tedious. Like the actual Carmen Sandiego games, each game is randomized, so the items, as well as the locations of the gang members and Carmen, changes each game. But you only have a limited number of turns to beat the game, and you won’t know if an area has any items or any characters unless you spend time searching or calling out each of their names. It feels like you’re just blundering around, picking through menus, instead of actually learning about the Divine Comedy like you should be. 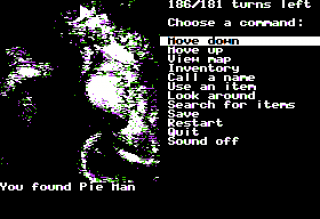 Despite how seriously the game takes itself, the author was aware of how silly it was, and certain versions included an extra scenario called “Pit of the Programs”. Here, all of the items and characters have changed (except Carmen), with the gang members either being parodies of other educational games from the time (Reaver Rabbit being Reader Rabbit, Stinkybear being Stickybear, etc.) or else otherwise silly references to characters like “The Ultimate Ninja” that seemed to be in-jokes between the developer and his friends. Of course, this causes the actual education element to fall by the wayside, and so the wandering around becomes even more of a random process of calling out names and trying different items until you figure out what the hell game wants, or you run out of time. The game’s readme file suggests that extra scenarios were forthcoming, probably for those who purchased the registered product, including a mode entitled “Deathstyles of the Rich and Famous”, described as “revenge on those people that SHOULD be in Hell”, and another mode featuring characters from Matt Groening’s Life in Hell series. It’s not clear if these were ever created or released to the public. 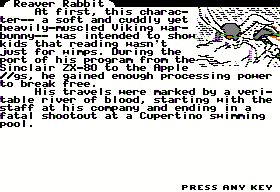 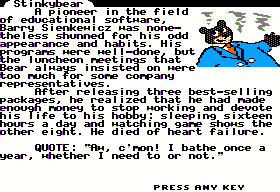 Obviously, part of the fun of the actual Carmen Sandiago games was learning about real geography or history, whereas typically only high level literature classes ever cared about The Divine Comedy. It’s the reason why most games with math-related puzzles are rely on things like logic rather than calculus, because one has an actual function in the real world (for most people, anyway). Moreover, the structure is too much trial-and-error, which is especially a problem playing on actual hardware, where ever move is accompanied with a disk load (and potentially side change). Still, one can’t help but admire that such a bizarre project exists – that someone not only took something like sounded like a practical joke, but also took it at face value, and ended up making a whole game out of it. The fact that the game isn’t very good is pretty much irrelevant.