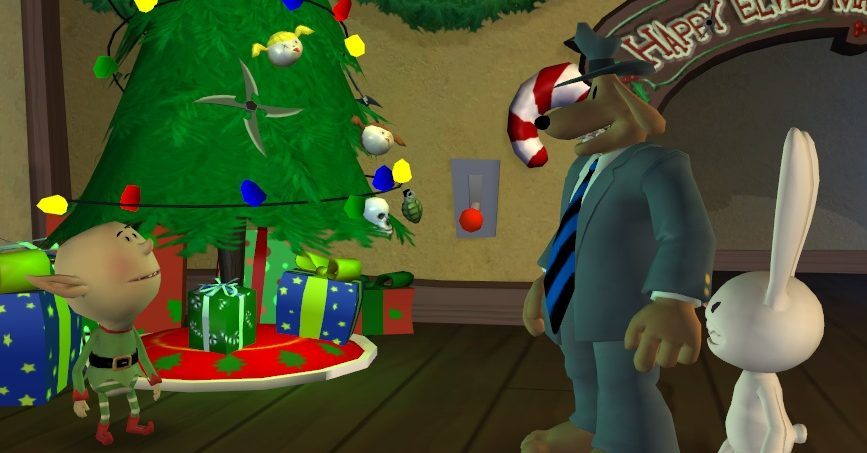 Season Two of Telltale’s Sam and Max series, retroactively named Beyond Time and Space, is much the same as the first. It features five episodes instead of six, and it focuses on various supernatural occurrences – demonic possession, vampires and zombies, alien conspiracies, and so forth – all loosely tied together. From a technical standpoint, it allows widescreen support, but little has changed otherwise. You’ll also see some familiar faces – Bosco is still running his convenience store, and Sybil can be found courting the head of Abraham Lincoln. The COPS have also taken up residence on the block, operating a body shop called Pimp le Car. 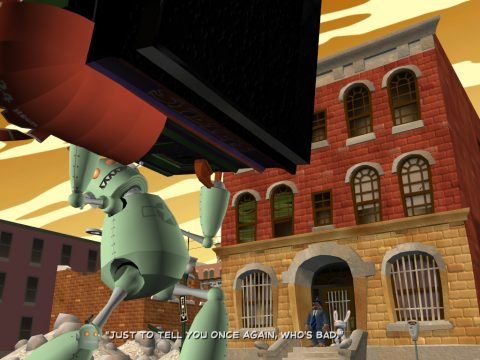 The second season also introduces two new (-ish) characters. Flint Paper, who showed up in the comics and appeared off-screen in Hit the Road, is Sam and Max’s next door neighbor, who happens to be hard-boiled (albeit rather friendly) private detective. And Stinky is the proprietor of the local diner, a rather shapely young aqua haired woman who inherited the place (and her name) from her mysteriously absent grandfather. She’s a pathological liar, as well as an appalling cook, and numerous suspicions are raised about her murdering the real Stinky. (You can find her scrubbing a blood stain from the counter, yelling “Out, damn spot!”) 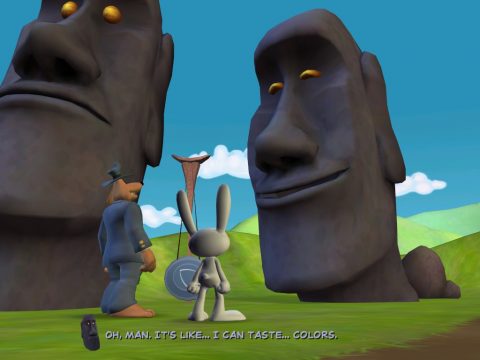 Like in the previous episodes, you’ll usually visit some far off location and need to make return trips to the home block for various important items. It’s still formulaic, but at least the framework and characters have changed up a bit, so it feels fresher. All of the episodes are also introduced with a nonsensical “based on” quote on the title card, much like the comic books. 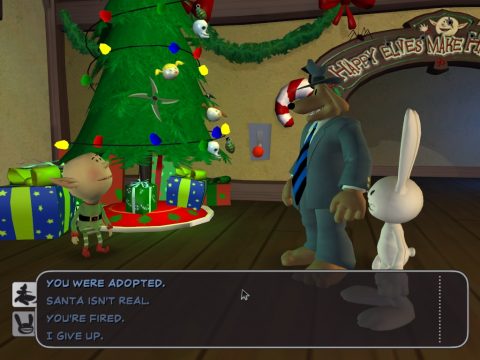 Ice Station Zebra (Based on the obscure holiday penny dreadful “Sam & Max in the Case of the Frostbitten Protuberance”) begins with the neighborhood being terrorized by a gigantic robot who has a thing for misquoting ‘80s pop music. After disposing of him, Max uncovers a terrible secret – the lumbering monstrosity was a misguided Christmas gift sent by none other than Santa Claus itself. A quick jaunt to the North Pole reveals that Saint Nick has gone stark raving mad, having barricaded himself in his room and holding his elves hostage at gunpoint. To complete this episode you’ll need to go on a Christmas Carol-esque journey through time, using the past, present and future to manipulate the rat Jimmy Two-Teeth and his son Tim, who has a terminal case of Tourette’s Syndrome. There’s also a rather brilliant Punch-Out!! homage as a minigame, complete with a near replica of the original music and sound effects. 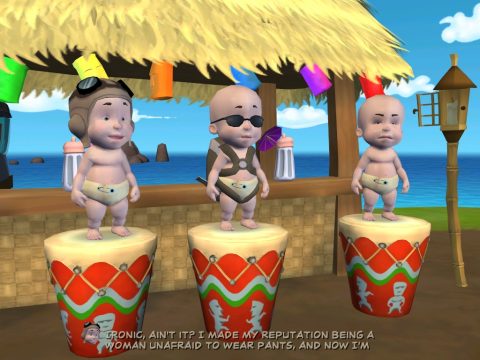 Moai Better Blues (Based on the unfinished teleplay “Sam & Max Jump in a Triangle”) kicks off with Sam and Max, along with Sybil and Abe, being sucked into the Bermuda Triangle – apparently they’re halfway-sentient portals rather than an actual place – and transported to Easter Island. It’s here where they discover the Fountain of Youth, along with a number of historical characters that have mysteriously disappeared – Amelia Earhart, Glenn Miller and Jimmy Hoffa. They’ve all become addicted to the water of the fountain, and have thus reverted into talking babies. Sam & Max need to lightly drink from the fountain to solve a puzzle or two, temporarily turning them into precocious youths. The ultimate goal is to stop the explosion of a local volcano, which you’ll need to do by convincing a tribe of sea gorillas that Max is their true High Priest, and not the dead goldfish they are currently worshiping. 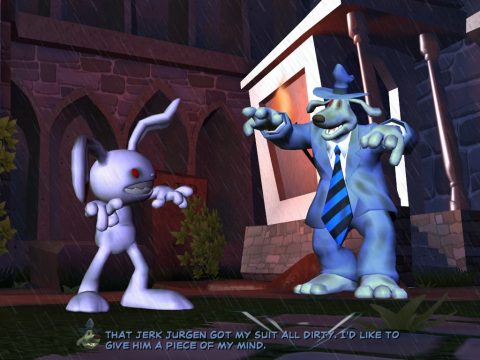 In Night of the Raving Dead (Based on the heretical apocrypha “Sam & Max Meet a Guy Who Sucks”), zombies have been unleashed over the globe, and their source is traced to a castle in Stuttgart, Germany. Sources indicate this place is named “The Zombie Factory”, but that’s not literal, and it’s more of a dance club for the undead. Its lord is a vampire named Jurgen, an effeminate goth who gets his powers from his sense of style, and bears more than a passing resemblance to Sacha Baron Cohen’s Brüno character. After ruining Jurgen’s cool (in the process partaking in another shooting of Midtown Cowboys, which is mysteriously popular in Germany), the duo are unceremoniously murdered (complete with a Resident Evil-style “YOU HAVE DIED” blood splatter) and are cursed to wander the world as zombies. The rest of the episode is spent reuniting Sam and Max’s souls with their corporeal bodies, and destroying Jurgen for good. 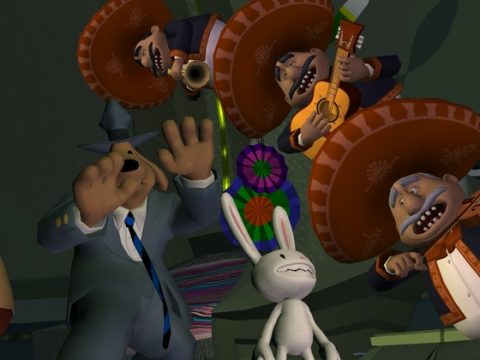 The fourth chapter, Chariot of the Dogs (Based on the best selling addle-brained musings of noted aliens-made-all-our-stuff theorist Erich Von Dannyohday), picks up with Sam and Max being abducted by a mysterious spaceship. They run into Bosco, who, as it turns out, was completely justified in his absurd paranoia, and has been captured by a mysterious entity called T.H.E.M. He has also been turned into a half-cow. He can only be saved by time traveling through the ages, where they run into Bosco’s mom and cause a Back to the Future-style paradox which threatens his existence. Time travel was used to an extent in earlier segments, but here it’s the crux of the episode. While potentially comparable to Day of the Tentacle, in Chariot of the Dogs, it’s a bit too convoluted, especially when it comes to dealing with Sam and Max’s alternate selves. Once all of that confusion is cleared up, Sam and Max have to deal with the Time Mariachis, the owners of the ship, who have formed a pact with Hell to deliver souls into the afterlife in exchange for the ability to warp through time and sing birthday songs. These games have always been quite surreal, but when it comes to the events of this episode, the story becomes head-scratchingly weird. 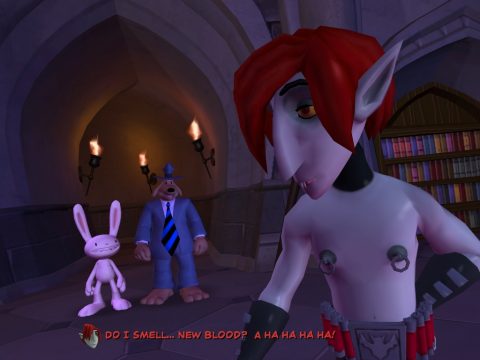 In the final episode, What’s New, Beelzebub? (Based on the heartwarming holiday sestina “Sam & Max Meet the Father of Lies”), Sam and Max enter Hell in search of Bosco’s soul. It’s not exactly filled with the fire and brimstone that one usually pictures, as Hell is actually closer to a corporate office, complete with a cubicle farm. It’s far from pleasant, for the most part – every day is Monday and the clock is perpetually stuck at 4:59. And Satan, while still a scary and imposing guy, is too busy running the bureaucracy that is the afterlife, and just doesn’t have the time to be properly evil. Here Sam and Max meet numerous past villains, some of whom are actually quite happy in their positions as the damned. Rather shockingly, our heroes discover a shrine erected in their honor, where they find the souls of those who have perished due to their reckless behavior. In addition to Bosco, there are a handful of others, including their DeSoto, who are trapped in their own personal hells. After rescuing them, Sam and Max get damned themselves and need to escape from their own nightmares. At the same time, Satan himself is fired from his position as Lord of the Underworld by an even more nefarious villain, and so Sam and Max must come to his rescue. 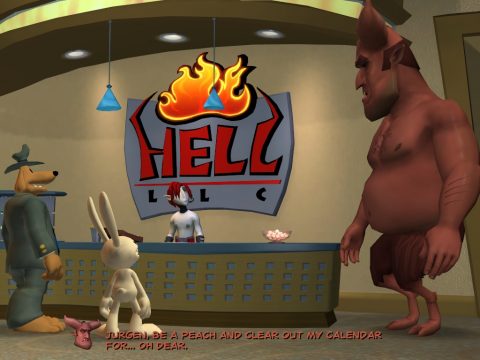 Overall, Season Two is a substantial improvement over the first one, if mostly because it’s more consistent, and doesn’t take nearly as long to reach an appropriate level of funny. In addition to the standard PC release, it can also be found in downloadable form on the Xbox Live marketplace, and as a retail release for the Wii. While the Wii port is a step above the first one, as it fixes the dialogue glitches, it still has some performance issues, and is best avoided. 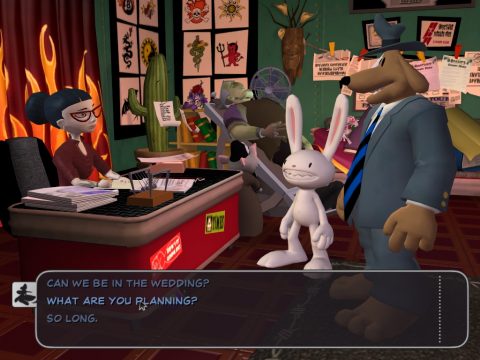