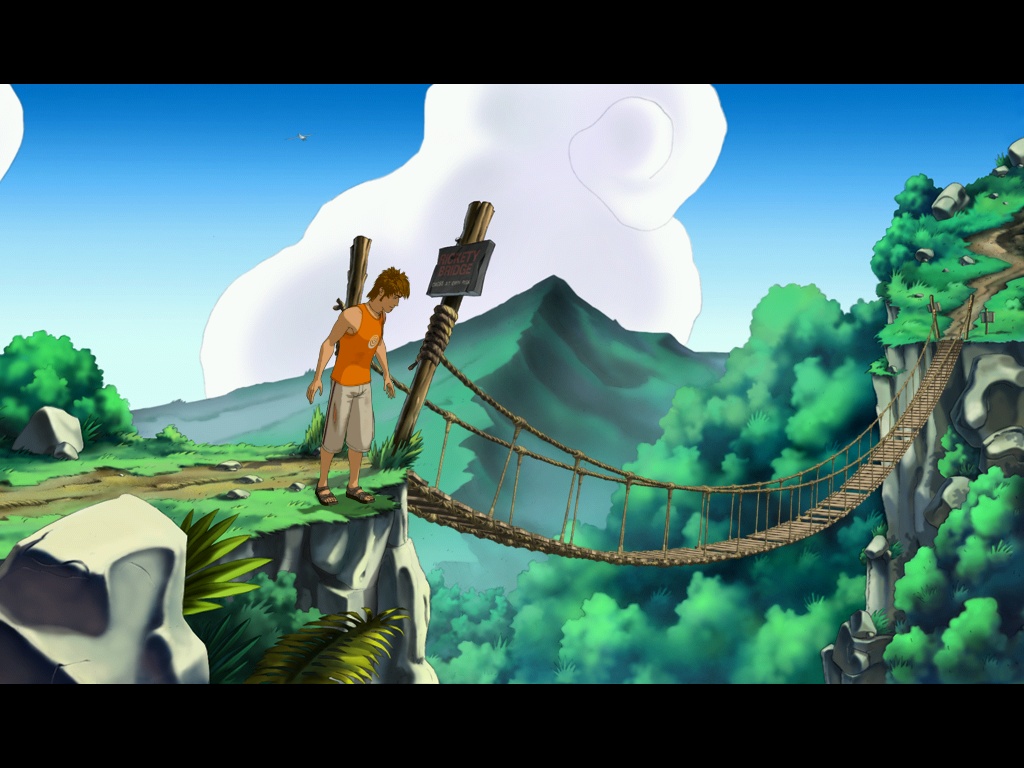 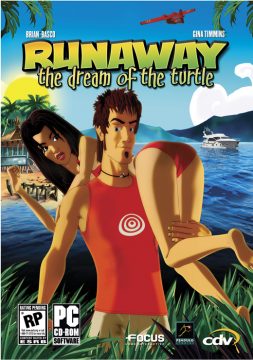 Runaway found enough success that Pendulo released a follow-up about five years later, subtitled The Dream of the Turtle. This time, the framing story involves Brian instant-messaging Sushi, as he finds himself in yet another scrape. Brian and Gina are now an official couple and head off to beautiful Hawaii to catch some rays. Unfortunately, an ill-advised airplane tour goes awry, with Brian giving Gina the only onboard parachute to jump out the door, while trying to crash land safely. Trying to recover Gina turns out to be much harder than he anticipated, seeing as the location they’ve happened across, Mala Island, is occupied by the United States military. It’s led by the cigar-chomping Colonel Kordsmeier, and he’s not up to letting civilians waltz through his encampment, which just so happens to be where Gina landed. After cavorting with the locals and disguising himself as a professor to infiltrate a series of ruins, Brian learns that the army is guarding the remnants of a crashed UFO, complete with stellar life forms. In the face of mad military generals and cold-blooded assassins, Brian must not only rescue Gina, but discover the secret behind the aliens and the mysterious element called Trantonite.

From the beginning, Runaway 2 is a lot surer of its tone than the first game. When divorced from all of the murdering gangsters, the story is free to be a lot sillier, and the introduction of aliens allows for a much more off-the-wall plot, especially once you find an artifact that can bend space and time. The downside is the return of Joshua, an aggravating character from the first game who’s been promoted to a supporting role. He’s had close contact with the aliens and joins your quest, but does little other than causing lots of annoying problems for Brian. It’s a terrible way to motivate players to solve puzzles when you really want to strangle the dope who keeps getting you into mess after mess. 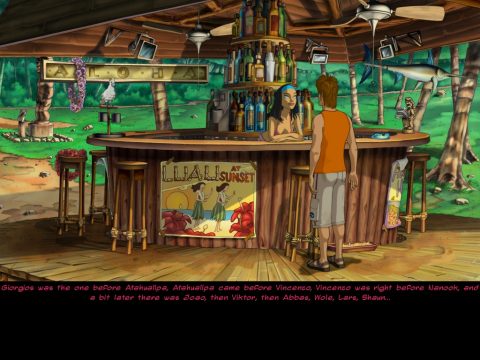 A few other characters from the first game, including Sushi and her pals, make a return appearance, and they still try hard to elicit laughs while failing completely. Slightly more amusing are a few of the new characters, including the overtly slutty barmaid Lokelani, who inappropriately regales Brian with stories of her many, many, many ex-boyfriends, and a dim-witted Army sergeant named O’Conner, who can be manipulated in a number of amusing ways. The final chapter is a dream sequence that takes place onboard a 15th century ship, and has more than its fair share of Monkey Island references. One of the first “characters” you meet is an alcoholic lemur, who, quite frankly, should’ve had more of a starring role.

Runaway 2 also occasionally does some clever things with the hotspot descriptions. At one point you need to break off part of a wooden window sill. When you go back later and try to fix it, instead of saying something like “Use Board on Window”, the action text reads “Restore Board’s Lost Honor By Returning Its Status As a Window Sill”. The game really could’ve used more clever bits like this! All in all, it’s certainly a step up from its predecessor, but the story is still filled with questionable moments. Why, for example, does Brian stop to hook up with the bikini-clad waitress? Doesn’t that sort of undermine his whole quest to find Gina if he’s just going to shack up with some random floozy? And while it’s perhaps a bit much for a Spanish studio to understand American political correctness, they should have maybe realized that a white dude wearing makeup to dress up as a black man is perceived as fairly offensive.

But the larger problem is that this is really only one half of a game. While it’s still six chapters long, it ends on a cliffhanger and almost nothing is resolved, so some aspects really stick out. Considering Gina’s featured right on the cover, it’s weird how little of a role she plays. She’s in the intro, and pops up a few times in later cutscenes, but beyond that, she’s totally absent. And the story goes through the trouble to introduce Tarantula, a scorchingly hot assassin who disposes of her targets with deadly spiders, but outside of killing a few henchmen off-screen, she doesn’t really do much of anything. It doesn’t help that the plot is overly elaborate without being interesting. Sure, the whole alien case somehow ties in with a Spanish conquistador, but it’s a plot thread that’s given way more exposure than it deserves. And the dialogue still hasn’t improved, making for long, pointless bouts of conversation. 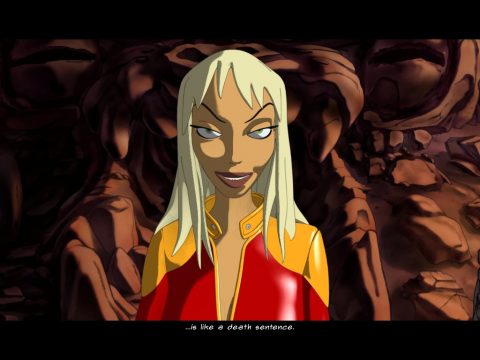 While the narrative sees some slight improvements, the rest of the game doesn’t. Brian still refuses to pick up stuff unless you’ve previously discovered a reason to, and the hotspots are still too difficult to find. The puzzles aren’t as overtly stupid as in the first game, but there are still some real headspinners. At one point, you need to get an item from one of Sushi’s stupid friends. He’s an inventor, and discusses how he wants to create a tool that makes people eat slower. (How odd.) To solve this, you need to empty a few wine jugs, fill them with sand, tie them together, and stick them on to a trident you nab from a statue. Thus, you have a large-scale model of a “time fork”, a fork with an hourglass attached to it. The game almost seems to acknowledge how dumb this is, but it’s still quite inane.

The graphics still look fantastic. Since a good chunk of the game takes place on gorgeous tropical islands before moving to the Alaskan mountains, and eventually out into the ocean, there’s much more room for the artistry to shine. The style of character design is similar, although the models are much improved over the first game, and there are far fewer awkwardly lip-synched close-ups. Brian has received a huge makeover and now looks like a surfer dude, although he still talks and acts the same as before. The new title song sounds like an awful boy band ripoff, although Vera Dominguez still provides a few other decent songs.

While Runaway 2 is an improvement in many ways, it still falls prey to most of the troubles of its predecessor, and haters of the first will likely not be convinced. Those that enjoyed the first game will obviously find more of the same, although some have voiced their displeasure over the prevalent science fiction aspects. No one will be pleased by the ending, although at least the third game fits everything together nicely. 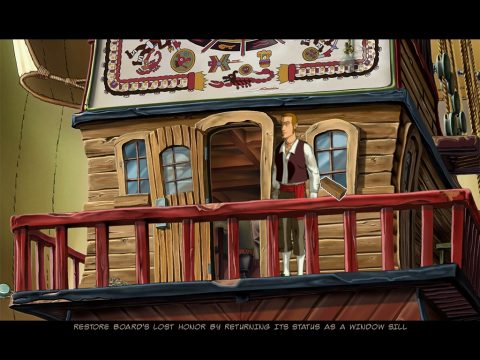 In addition to the standard PC release, Runaway 2 was also released on the Nintendo DS. Obviously the backgrounds and characters needed to be greatly resized to fit onto the portable screen, so the visuals lose much of their luster. Many of the movies are heavily chopped up and compressed. There’s no voice acting, either. The touch screen interface works well enough, though, since it zooms in whenever you point at something with the stylus, and the hotspot indicator is a godsend. A Wii version was also released in 2009, which features remote pointer controls and an online help system similar to the one in the third Runaway game.