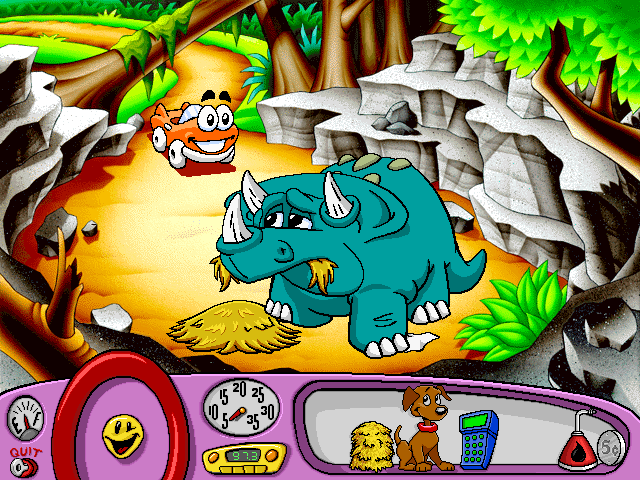 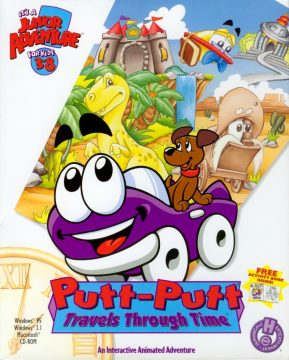 After Putt-Putt Saves the Zoo, Humongous continued to grow as a company, and their games grew in complexity alongside this. Despite this, their games remained fairly bite-sized, child-friendly experiences. Longer adventure games were never Humongous’s preference. They preferred to push out multiple shorter games per year. Instead, the developer learned to encourage replayability by having their games follow different randomized “paths” that would alter how the story was played through. 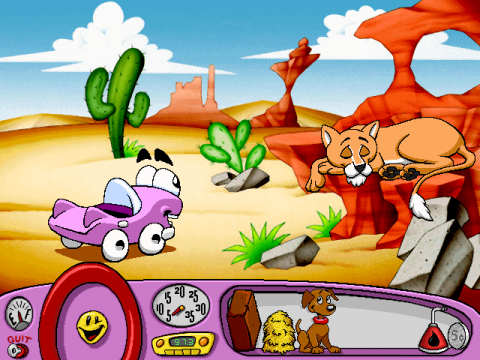 While Humongous had already tried some randomized variables in previous games in the series, Putt-Putt Travels Through Time invests in this approach far more thoroughly. Consequently, it also feels considerably more complex than the previous games, as if to take its own time travel aspect to create a multiverse of potential Putt-Putt adventures. Each of the game’s four key items have four different potential locations, giving it a surprising amount of replay value.

The beginning of Putt-Putt Travels Through Time mirrors previous games in the series. Putt-Putt begins in his house. He’s excited about his history report, but first would like to visit Mr. Firebird, the same quack scientist that two games ago stranded him on the moon. Mr. Firebird’s lab has the “Fireworks Factory” part boarded up over it, as he has now fully embraced his status as the Putt-Putt universe’s mad scientist. The hotrod doesn’t seem particularly interested in Putt-Putt’s history report and school supplies, but he does want to show Putt-Putt his new time machine.

Seemingly built out of a repurposed commercial washing machine, the contraption has a screen on it that allows the viewer to look into the past. When Putt-Putt activates it by putting his lucky quarter through its coin slot, the machine goes out of control. The latch over its “screen” reveals a portal into time that sucks away Putt-Putt’s history report, calculator, lunchbox and, most urgently, his dog Pep. 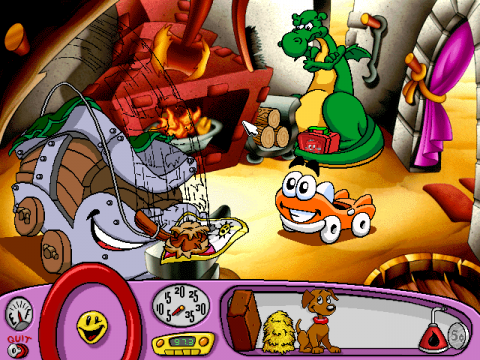 After stranding Putt-Putt on the moon, you would think Mr. Firebird would have more caution as a scientist and maybe look to take responsibility for his doings. Instead, he stands idly by and tells Putt-Putt that the little car himself must go into the time portal and find his precious items and dog on his own, and only then will the time portal be able to be closed. As always, Putt-Putt takes it with aplomb. If he can make it back from the moon unscathed, what’s a little time travel?

At this point, Putt-Putt Travels Through Time opens up in a way that almost recalls Chrono Trigger’s time portals, although without the kind of epic complexity and length of that game.The game offers the player prehistoric, medieval, western and futuristic worlds to enter, arranged left to right in chronological order in a blue void. A trippy instrumental plays out with echos of Putt-Putt’s voice. In this void space, Putt-Putt can both peruse his locations, as well as optionally listen to a song about time travel that feels like a darker cousin to Putt-Putt Saves the Zoo’s theme “Welcome to the Zoo”. This song also offers the game its main melodic motif, recurring in different time periods with soundfonts that match their period.

The subsequent challenge of Putt-Putt Travels Through Time is mostly built around collecting items from time periods and using them in other time periods. A rock found in the medieval section might help complete a bridge in the prehistoric section, or an oil can found in the old west can be used to grease the rusted gear on a castle gate in medieval times. 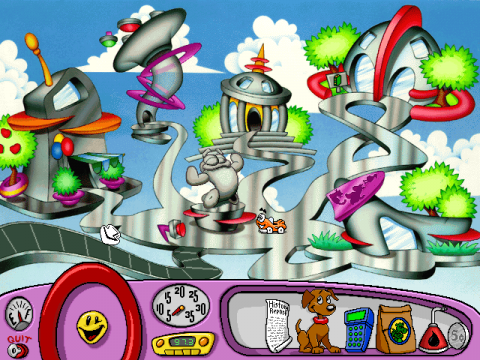 While never too complex again, these puzzles do seem to require more navigation than previous games. In one example, the king in medieval times has Putt-Putt’s history report, and won’t relinquish it without something funny to read in its place. In order to get such a text, Putt-Putt must print it out at a library in the future. Even knowing this, the history report may just as easily be under a dinosaur’s foot in prehistoric times, or on display at a futuristic museum. The game isn’t dramatically more difficult, but it does require a little more expertise from the player and rewards repeat plays. Previous puzzles in Putt-Putt could sometimes boil down to following directions or just navigating the map properly. While those puzzles aren’t entirely gone here, they usually have more barriers to their completion.

The different time periods make the game feel a bit more epic in scope, even if some areas of the map are all but empty during some playthroughs.Perhaps the most interesting thing about the game is watching different stages of some sort of long-running car-person civilization. Putt-Putt never tried hard to justify or explain how its society worked, nor should it, but seeing Putt-Putt go back in time and meet a stone wheel, then talk with chariots in medieval times and carriages in western times, and then go to the future to meet robots and hovering vehicles is interesting, to say the least. Putt-Putt’s ability to travel between these times, as well as his people skills, allow him to solve most of his problems.

One character, Toby the steam engine, is stuck on tracks and needs a drink of water to get his boiler working. These kinds of transactional relationships drive a lot of the puzzles. Putt-Putt has to get someone something so they can get him something, or so they can allow him to advance. 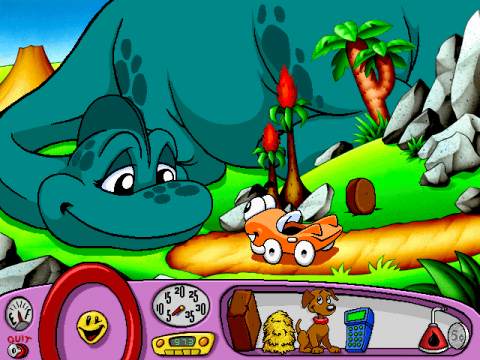 Besides item puzzles, the game also offers many mini-games of varying quality. In most playthroughs, a player will have to at least one of them. A desert path of pawprints that occasionally leads to Putt-Putt’s lost puppy can also lead the player to different animals that Putt-Putt will gawk at and describe. In the future, a faux-3D Breakout game called 3D-riffic Paddle Ball can be played on an arcade cabinet.  A Simon-style game can be played in prehistoric times called “Follow the Volcano”. “Silly Stories” shows various children’s stories that can be printed out at the futuristic library. “Shoo, Crow, Shoo” is a medieval game where Putt-Putt sends up balloons to scare away crows on a castle wall. At a pet food maker, the player can make food for animals, moving three dials that allow Putt-Putt to feed even hybrid and fantasy creatures. “Picture Jumble Rocks” has Putt-Putt helping a T-Rex put together a puzzle by moving several giant tablets around. The ability to paint Putt-Putt also returns in the future, but now with light, standard and normal variants to each color, meaning Putt-Putt can be painted 18 different colors in this game.

Once Putt-Putt has collected all of his items, he immediately exits the portal and ventures back into the present. Putt-Putt may have nearly lost his beloved puppy forever, but he doesn’t harbor any hard feelings towards Mr. Firebird. He declares his time travel adventure to be “the best fun ever”.

With the whole time travel ordeal behind him and no signs that Putt-Putt will be pressing charges, Mr. Firebird locks up the time machine hastily and Putt-Putt hurries off to class for his history presentation. The credits role and the game’s theme plays while Putt-Putt gives a mute presentation to his class, drawing robots, horses, carriages and dinosaurs to a surely confused class. Ever the optimist, Putt-Putt doesn’t seem rattled by his adventure. Instead, he’s eager to do it all again.

Putt-Putt Travels Through Time, like most Humongous Entertainment games, was given a release on CD-ROM for Windows and Macintosh PCs. In 2014, it was released on Steam, iOS and Android through ScummVM emulation.