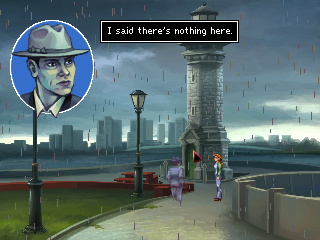 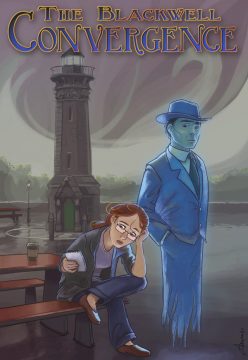 Since both titles were originally planned to be parts of one game, The Blackwell Convergence concludes the arc set up in Unbound. This game features a disgruntled artist, a suspicious loan office, a dead mediocre actor, the return of Joe Gould and Joseph Mitchell, and the option to have Rosa get drunk out of her mind at an art gallery. It’s a much more epic plot than the previous two games, which is to be expected since Legacy mainly sets up the background of the series and Unbound is really just a setup leading up to Convergence. As a result, Convergence features more terrifying antagonists, interesting spooks, endearing side characters, more fleshed-out characterization of both Rosa and Joey, and a faster pace than before.

The game cements Rosa as an impromptu detective, which was ostensibly what Gilbert wanted to do with this series: have a non-cop character out solving mysteries. She’s developed into a more analytical, mature person, having become begrudgingly comfortable with Joey’s constant presence and accepting of her position as a medium. The series really comes into its own and hits its stride because of this. Convergence also brings to light a pattern in the series’ line of antagonists that is worth repeating: They are never just evil. There’s always an eerily understandably reason for why they want to commit their immoral deeds, never descending to simplistic “because they like to” excuses. It’s one of the most interesting strengths of the series, and adds tremendously to its exploration of human strivings. 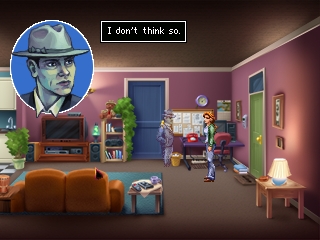 Gameplay-wise everything is mostly the same, just more fluid and even. Character switching returns. Joey has a little bit more to bring to the table, like his ability to blow things around and his tie brought into the inventory. Combining clues has been discarded, making investigation more streamlined. Unfortunately a majority of the puzzles involve searching for keywords on the internet to get information, a vice in most of Gilbert’s games. It’s true to life, maybe, but it can get repetitive. And it’s a bit of a drag to have to go back to Rosa’s apartment after every single advancement in the plot to use her computer to look up the latest clue.

Convergence sets its mood with rain. Lots and lots of rain. Legacy had warm, sunny weather, Unbound was a bluesy nighttime, and Convergence exists within constant downpour. Each game’s distinct weather pattern tends to reflect the game’s overall tone, and here the rain works to show just how downright dismal being a medium can be sometimes. Nonetheless the backgrounds designed by Luminous Arts and Karen Petrasko are more colorful than before, like a well-polished LucasArts adventure. They add charm and vibrancy to the atmosphere, preventing the game’s otherwise dark tone from getting too depressing. Particularly impressive is the Park Gallery, which features several works by a street artist. Instead of using premade artworks or hiding them from the player’s view, the gallery hosts several distinct, beautifully pixellated paintings. Sprites are also a bit more animated than before, and the constant rain adds more life to scenes as well.

Thomas Regin returns as composer. He mixes the old with the new, combining the modern feel of Gresser’s soundtrack to Legacy with the jazziness of Unbound. The result is, again, wonderful. 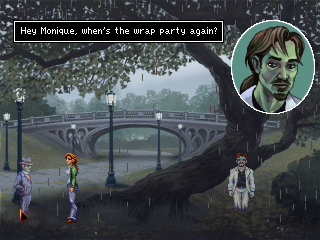 Convergence just has a lot of love obviously involved in its creation. Little details abound throughout the game, such as how Rosa and Joey make snarky comments regarding most of the objects they can click on and how Rosa’s emails add subtle context to her personality. Convergence is arguably the best Blackwell game. Objectively, the final three of the series are on a similar if not equal level of excellence, but the plot in Convergence is the most compelling. It is also refreshingly free of “middle man” syndrome. Usually the middle entry in a series is prone to exist solely for bridging the gap between the former and latter halves. Blackwell games don’t work that way. Each has a relatively autonomous plot that still makes room to build off the previous installment, adding more to the mythology of the series without detracting from the individual game’s credibility.