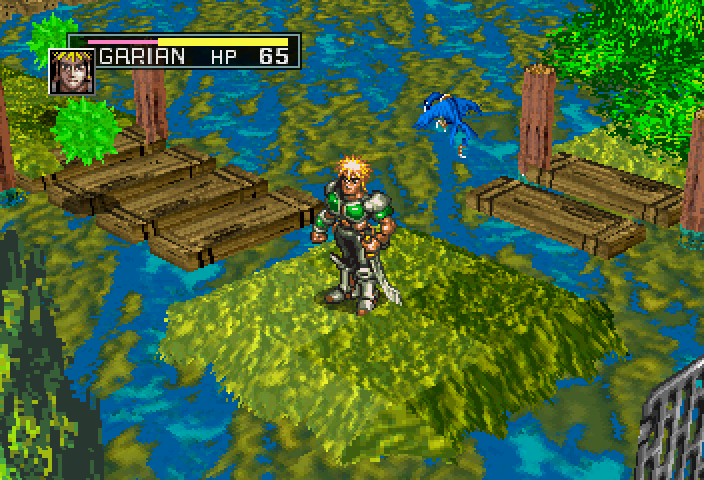 Some games change the world because they were truly fun and revolutionary. Some games change it because the evolution of hardware and gaming trends matched up with great marketing. Some games simply never had a chance, and their innovations are only remembered by fansites and retro game fans. Many amazing Sega games fall in the third category. Sega’s missteps in the mid-and-late ‘90s resulted in more than their exit from the hardware-manufacturing world – large parts of its games library is at worst forgotten and at best marginalized. Dark Savior is one of those Sega games. The banal box art masks one of the most innovative games of its time. Most importantly, it’s an early game of postmodern storytelling, one in which most players will never unearth the game’s true narrative. Dark Savior is an isometric action RPG/platformer developed by Climax Studios, the same team behind Landstalker for the Genesis, with multiple scenarios to play through and wholly unique gameplay. 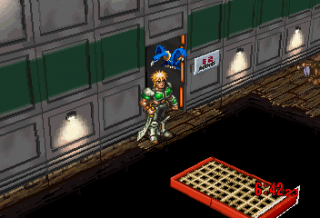 At the outset, bounty-hunting Garian (known as Ryu-Ya in Japanese) wakes up on a boat that’s carrying the metamorphosing, gelatinous Bilan (whose katakana can be read as “villian”) to Jailer’s Island. Previously, in the climactic battle between Garian’s party and Bilan, Garian’s best friend, Lance, was killed, possibly by Garian (Bilan physically possesses his victims). He awakes in bed next to a blue rose, which only grows on Jailor’s Island – a place to which none of them have ever yet visited.

It’s not made clear initially, but your performance in this prologue on the boat will determine how the rest of the game plays out. This leads to different “Parallels”, or storyline branches, once you read the island. Indeed, shortly after arriving, strange things happen (in varying degrees of horrificness, depending on which Parallel you’re on). The closest Dark Savior comes to telling the player what’s most likely happening is buried in a throwaway one-line from your companion. 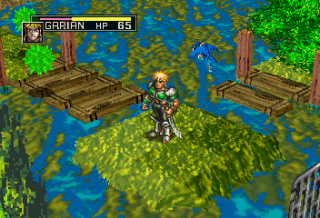 Dark Savior (along with perhaps the Saturn in general) really is the last gasp of the “traditional” 2D Japanese video game. Garian traipses through all sorts of crazy structures and platforms that defy reality, almost comically so. For example, In one long connecting cave, you negotiate across vertical and horizontal giant tombstones, suspended in the air. The Silver Castle particularly is practically a drug trip of colorful moving ledges, Salvador Dali architecture, and Rube Goldberg-esque platforming puzzles.While falling into pits means you’ve got to do an entire section over, the penalty for doing so is so minimal that most gamers probably won’t run out of continue points.

Each of the three main Parallels should take 6-10 hours on your first attempt. Eventually, you can roll through each in 2-5 hours. While the experience is largely linear, it’s well paced and breezy to play through, with almost no backtracking or pointless sidequests. Garian gets little to upgrade, though, besides his HP (using continue points) and strength (occasional items).

Climax utilizes the Saturn’s unique strengths as well as you’re going to see. The developers created their own 3D engine from scratch in assembly, which probably speaks to why most Saturn games don’t have polygonal environments that look this well textured. Its large, colorful sprites juxtapose well on top of 3D polygonal environments. Most importantly, the player can manipulate the 3D camera in real time. This fixes the major frustration with earlier isometric games, most notably Climax’s own Landstalker. In isometric 2D, platforming can be extremely difficult because the player can’t exactly tell where platforms are in relation to your character. 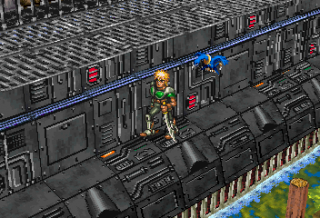 Dark Savior innovatively uses the Saturn 3-D analog pad — the D-pad moves our hero, (Garian/Ryu-Ya), and the 3-D analog thumbpad changes the camera in real-time. It takes some hand gymnastics, but you can maneuver and rotate the camera simultaneously if you prefer (as has become the standard in modern gaming but was rare at the time). The controls will feel foreign to any modern gamer used to dual-analog controls, though. Dark Savior being isometric, Garian walks in only the diagonal, ordinal directions (up-right, down-left, etc.), meaning you can’t freely move him around the 3-D environment as a modern gamer would expect. Garian’s jumps have no momentum, meaning once you let go of the direction he’s jumping toward, Garian forward progress halts while he’s still in the air. So if you want him to jump from your block to one that looks like it’s directly north of Garian, you have to jump in one diagonal direction, then make a mid-air, 90-degree turn to the other direction.It actually works great, and having any jump momentum would make the game almost impossible to play as is, but it’ll be a learning curve (akin to learning to platform without a jump button in Bionic Commando/Top Secret).

You have to think of Dark Savior as a 2D game in a 3D environment, basically, to find success within its gameplay. The end-game dungeons especially are tricky and test your mastery of the engine, with one Parallel even forcing you into a timed speed-run of them. One gameplay section in particular, though (the infamous mine cart), is a trial-and-error frustration fest. With a dynamic camera that’s much more harm than help, it’ll take multiple attempts to clear your first time through. 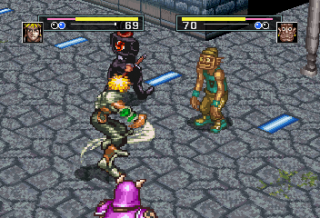 The battles are inexplicably presented as a basic one-on-one fighting game. It’s basically a better-playing Urban Champion plus the ability to block, charge a super move, and run. It’s not bad, just jarring and peculiar. At least it uses your brain more than “lock on + press attack”. You can capture most enemies using your super move, thereby forcing them to fight in your stead in future fights. But it’s ultimately pointless, because if one loses a fight for you, it’s Game Over instead of allowing you to send another battler out. Garian’s speed and attack make every battle supremely easy to win with basic timing, anyway.

The Western version went through minor censoring. The goods exchanged for points and services changed from things prisoners might actually trade (alcohol bottles, cigarettes, and porn mags) to innocuous knick-knacks (bottles, chocolate, and magazines, respectively). Ancient depictions of bad things happening to young maidens are playfully explained away. Most unfortunately, Garian’s actions at a key moment early on are the result of his drinking “jalapeno juice” instead of whatever hard liquor Ryu-Ya is offered in the Japanese. The localization also removed lyrics from each parallel’s ending track (arguably for the best: Parallel I’s theme particularly is striking. It’s a melancholic, reflective studio piece that subs in an emotive electric-guitar performance for the original Japanese vocal line.) The English translation (done by Sega) by all accounts seems to be faithful to the Japanese. It’s quality for the time, with only the occasional really bad line. It doesn’t do anything to stand out though, and the characters’ personalities aren’t especially distinct or interesting. The script also has a few head-scratching story moments that the overseas team clearly didn’t know what to do with, so they translated it literally and called it a day.

However, it’s not in the actual writing, but the scenario planning, that makes Dark Savior special. The “Parallel System” essentially is three different versions of the story (with a fourth, bonus path if you lose the culminating battle). Parallel III and IV reveal a world-shattering “is this real?” subplot, but, a la Metal Gear Solid 2, the true meta of the story is up to the player to decode and decide. Without spoiling anything, Garian’s tale is closer to a Greek tragedy than it is to The Legend of Zelda or Terranigma.  His personal ghosts, his regrettable actions, and the mystery of his surroundings are not merely obstacles for the main character to happily conquer, forgotten once the final boss is defeated. 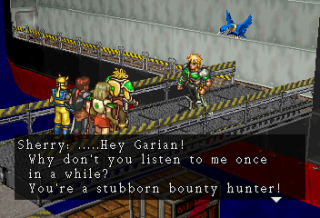 Because game developers have more story-telling freedom than a novelist or filmmaker, fantastical happenings in games are usually presented realistically. The player isn’t conditioned to ask why a character who was just flying 20 feet up in the air for a battle now can’t step across an overturned locker. Dark Savior and Metal Gear Solid 2 are rare games that ask the player, “Is there a reason this game universe is the way it is?” On top of that, they’re brave enough to not answer the question for you. Players are not often asked this question even today, let alone in 1996. The reviews of the time ranged from mild praise to golf claps to “what game were you playing?” (According to Wikipedia, “GamePro found the game too easy in general and judged the story to be simplistic and overly linear.”)

It’s hard to say if Dark Savior was a financial success. It received drama CDs in Japan, as well as an arranged soundtrack (which has minimal differences from the final product). On that note, Dark Savior has one of the best-composed scores recorded via the Saturn sound chip. Garian’s hopeful and heroic theme, “Lonesome Soldier”; the playful “Lavian Rose” (Kay’s Theme); and “Deadman’s Castle” stand out particularly. The drama CDs have been mostly translated to English (in this thread, search for “paste” to find the pastebins, if you want to avoid massive spoilers and conjecture. The CDs are here, as well).

Many Dark Savior developers have contributed to other, more famous games. While the execution is often questionable, Dark Savior clearly had a team of creative, talented programmers. Graphically and gameplay-wise, there’s nothing else really like Dark Savior. The story taken as a whole is haunting and affecting, and could never be told through another medium. And the music is synth-rock SEGA glory, alternating between cheerful, inspiring, and melancholic. It’s also interesting from a technical standpoint to wonder where games would be today if the industry had evolved more in line with the Saturn’s power rather than its 3D-heavy rivals.

It’s far from a perfect gaming experience, and it’s pretty weird, but once you adapt to its rules, it might end up being one of the most special games you’ll ever try.

And for members of the Hardcore Gaming 101 Patreon there is a Patreon exclusive episode available on Dark Savior of the Top 47Kgames Podcast available here.

Legend of Oasis, The