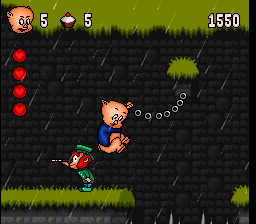 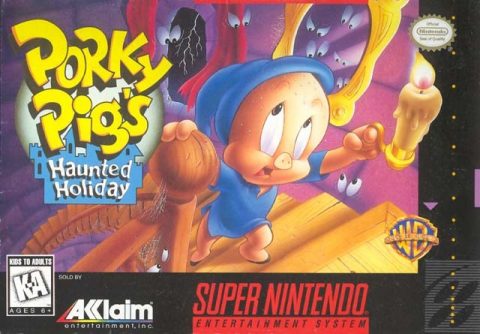 Porky Pig is one of the more underappreciated Looney Tunes characters. Sure, everyone remembers him for his iconic “Th-Th-Th-Th-Th-That’s all, folks!” line, but he lacks the same amount of star power that Bugs Bunny and Daffy Duck have. Whenever he does pop up, he’s almost always playing second fiddle to his more popular contemporaries. The irony is that Porky debuted several years before Bugs and Daffy did and they both owe their existence to co-starring in cartoons with him first. Nevertheless, poor old Porky often gets sidelined in favor of the more popular Looney Tunes stars, with video games being no exception.

Porky Pig’s Haunted Holiday is the only Porky-centric video game to be made to date. Although he’s made appearances in other games before and since, this is the only time that he has had a starring role to himself. It’s a simple platformer, like most Looney Tunes-related games of this era, but compared to the likes of Bugs Bunny Rabbit Rampage or Road Runner’s Death Valley Rally there’s something strangely off about it. While it plays pretty much like any other dime a dozen platform game, aesthetically it has this bizarre, off-putting atmosphere that feels very out of place from what you would expect.

Porky Pig is sitting up at night reading holiday brochures, wondering where to go on his next vacation. He decides to sleep on it, only to be thrust into a globe-trotting nightmare in a world ruled over by Daffy the Count Duck. The “dream” scenario is a relatively common one in games based on established licenses; it gives the developers the freedom to do whatever they want without violating the internal logic of the property. Haunted Holiday perhaps doesn’t make the most of this freedom, often lapsing into platform game level clichés (the forest level, the underwater level, the mine level etc.), but it has its own little oddball flourishes.

At first Porky can’t do a whole lot more than run and jump, taking out enemies in the typical platformer way of bouncing on their heads. Other than the cupcakes that act as the coin substitutes of the game, power-ups are thin on the ground. Baskets of fruit can be picked up to give Porky a projectile attack and fizzy soda somehow allows him to float. Compared to other platform games of the time, it’s very bare bones.

What makes Haunted Holiday worth playing at least once is these aforementioned oddball flourishes. The game has a weather system where, every time you play, it randomly chooses between different seasonal variants for each level. Even though it doesn’t matter to the level design if it’s sunny, raining or snowing, it’s a nice gimmick and a good show of effort on the part of the developers. The first level even has a few sections where you have to climb up and slide down a large tree which has a neat little rotation effect as you circle around it. The backgrounds look quite nice in general, some of them having a surreal quality to them that fits with the “nightmare” theme well. The trees in the first level with their spooky eyes are weird enough, but then you get to the snow level where halfway through you literally cross the border into “Wackyland”. Here you find yourself hopping on turkey legs and stacks of dice inside a desert where it rains fishbones and literal cats and dogs. Despite seeming so out of left field, this stage is actually one big reference to a real Looney Tunes short “Porky Pig in Wackyland”… Who knows why it was randomly slotted into the middle of the snow level, though.

It’s a shame similar efforts were not put towards making the visuals mesh together better; there is a severe disconnect between the quality of the character sprites and the backgrounds. Porky’s sprite in particular is strange to watch in motion, as it is constantly moving in a very over-animated way. Meanwhile the enemy sprites have barely any frames of animation. The bosses, ranging from established characters like Yosemite Sam to completely made-up ones like “Spooky Sid”, look particularly cheap as a result and make it look like Porky is waging battle with giant clip-art. The rampant use of pillow-shading doesn’t help matters.

The music deserves a mention for being the weirdest aspect of the game. Other than the title theme, which is a loud cacophony of disparate instruments and noises, it’s very minimalist and on many occasions manages to come off as very unnerving: the theme for the first level consist of discordant, ambient noises that sound like something you might hear in some kind of psychological horror film; the second level’s theme is more upbeat, but is still eerily quiet and off-key; the Wackyland level is made all the more wacky by the inclusion of a tune that sounds awfully similar to the track “The Office” from the film Brazil; and then there’s the final boss, who is fought with the constant sound of computerized beeps in the background and nothing more.

Unfortunately this fleeting strangeness is the only thing that Porky Pig’s Haunted Holiday has going for it. If that were all stripped away, you would be left with an overly simple, very easy platformer. The only part of the game that offers any challenge is the obligatory water level, simply because Porky’s movement is slowed to a crawl and it’s possible to end up going around in circles if you’re not careful. Other than that, even young children are unlikely to have much trouble seeing the whole thing through. And at the end of it all, you’re faced with a boss battle against Daffy and his “Chaos Machine”, a rectangular robot which is rendered completely impotent by repeatedly (and without any penalty) bouncing on Daffy’s head. Such a badly designed final boss really is the final straw.

Porky Pig’s Haunted Holiday, as quirky as it is in many places, is a hard game to recommend. It’s certainly not the worst mascot platformer to ever appear on the SNES and it’s not exactly going to waste much of your time, as you could easily finish the entire thing within an hour. If you’re a Looney Tunes fan, or one of the few people in the world who’s a huge fan of Porky Pig, it’s something perhaps worth playing through once for the experience and then never again.