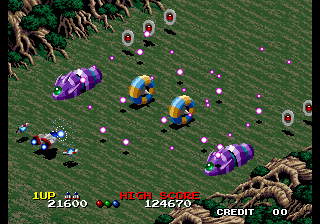 Viewpoint is an impressive isometric shoot-’em-up in a similar vein as Sega’s arcade classic Zaxxon. Although published and released by Sammy on SNK’s Neo Geo arcade hardware in 1992, Viewpoint was actually developed by a company called Aicom. While they may be an unfamiliar name among the better-known developers out there, many have played or at least heard of their games in one form or another. Their repertoire included moderate hits such as The Legendary Axe, Hoops, The Mafat Conspiracy, and Astyanax. Viewpoint had a unique visual style that featured 2D polygons that were rendered to give the illusion of a 3D environment. With its impressive visual style and soundtrack, Electronic Gaming Monthly gave it their award for best graphics and music in a video game for that year.

Indeed, Viewpoint was one of the more intriguing games of its era. Like a moth to the flame, the game draws the player in with its intricate level designs and enemy types- a few of which borrow heavily from the best parts of Xevious and R-Type. And just when you start to fall in love with the game’s environment, it suddenly turns up the heat and unleashes a barrage of challenges that would make the devil himself sweat bullets. And yet, despite dying many times, the compulsion to keep trying until you finally survive long enough to reach the next section can’t be denied. 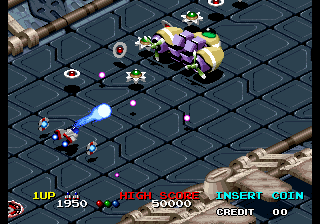 Like most isometric shooters, there’s an inherent layer of complexity that requires you to accurately determine your ship’s position in relation to rest of the action going on around you. This is especially crucial when things get hectic. The first two stages are fairly easy to manage as long as you pay attention to any stray bullets fired from the corner of the screen. But the opening areas only serve to gently inform the player of how to play within the rules of an isometric shooter. Once you pass on to the third and fourth stages, things get hectic quickly. Enemies increase in ferocity and their attack patterns become trickier to anticipate. The game even throws in a slight puzzle element involving indestructible hazards that either constantly shifts positions or otherwise require you to navigate around them.

The boss guardians at the end of each stage are colossal and rely heavily on spewing volleys of spread shots that are hard to dodge thanks to the isometric nature of the game. Most bosses can endure for quite some time no matter how many charged power shots you can sink into them. Since their attack patterns can be very hard to avoid, you’ll be anxious for the battle to be over thanks to the looming danger of being clipped by either a stray bullet, launched appendage or laser blast (or any combination of the three). Worse yet, all but the very first boss have multiple forms that must be dealt with before finally defeating it.

Interestingly, you aren’t penalized for touching the walls, giving you a bit of wiggle room to dodge attacks and obstacles. In addition to the standard pea-sized shot of the Byupo ship, you can hold the fire button to charge up your cannon to release a weak or strong power wave shot, depending on how long the button is pressed. Helpful satellite drones called “options” can be picked up early into each stage. They mimic your firepower, turning your single pea shooter into a triple shot. Unfortunately, they do not mimic or enhance the power of charged wave shots. However, they can be used to absorb enemy bullets. If your ship is destroyed, you’ll lose your helper buddies. Thankfully, the game is surprisingly lenient in this regard and places a fresh set of option drones very close to your restart checkpoint. 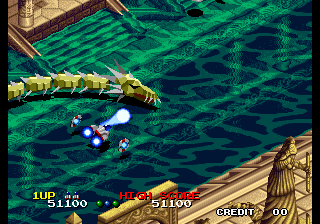 You can also make use of three variations of explosives– the Fire Bomb, Homing Bomb, and Shockwave Bomb. The Fire Bomb sends a wall of fire scrolling up the screen. The Homing Bomb fires a barrage of missiles that can lock on to various targets. And the Shockwave Bomb creates a large circular wave of energy that does a great job of destroying anything the enters its path. You can also pick up a barrier shield that will protect you from most normal enemy attacks except direct collisions or piercing lasers.

Viewpoint oozes visual beauty. Besides just taking in the pretty landscapes, the enemies that inhabit each area are well integrated into their native sections. Seemingly innocuous floor panels transform into gun turrets. Water gently sways in the aquatic environment as the robotic sea creatures attack you. Mechanical worms inch along the screen before suddenly spinning into a ball, releasing a circular hail of bullets. Pesky insects dart in and out of holes in dirt walls, attempting to obstruct your progress. Such details do a nice job of showing the indigenous characteristics of the enemies that populate each area.  The visual quality complements the isometric angle and is likely to please just about anyone.

What probably will draw most people to this game more than just the graphics or gameplay elements is the awesome soundtrack that accompanies the action. Of all the shooters that I’ve played thus far, Viewpoint definitely deserves kudos for having one the more eclectic soundtracks in its genre. Music is a diverse range of upbeat lounge, Middle-Eastern inspired techno, hip hop, smooth jazz, and other styles. 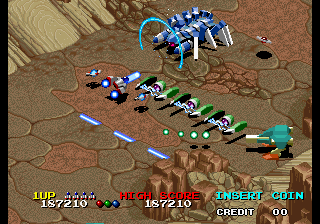 It’s a soundtrack that couldn’t possibly be more 90s if it tried. Of particular note, stage five’s tune “La Nervatura” sounds like it’s only a few degrees separated from the song “Dirty Cash” (with a slightly faster tempo) by the old British dance music group Adventures of Stevie V. Even if these aren’t styles of music that usually fit your palette of what you like, it matches well with the ambiance of each area.

The game would eventually get ported to a variety of home consoles including the Neo Geo AES and CD systems. As one might expect, these ports are arcade perfect with nearly zero differences between them. The only noticeable difference is the brief loading screen on the Neo Geo CD version since the system needs to read the data on the disc before loading the entire game. This version, in particular, will be the best for anyone looking for an arcade-perfect port for least amount of money. 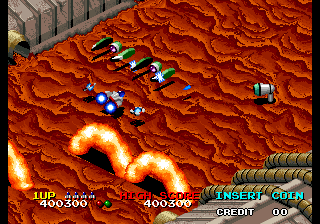 Viewpoint would go on to see life beyond SNK’s Neo Geo hardware. Some of the earliest ports were on the Japan-only FM Towns Marty and Sharp X68000 console and PC respectively. For the Marty port, everything holds up wonderfully. The graphics and music were mostly unaltered from the arcade original. Unfortunately, the same can’t be said for the Sharp X68000 version. While it graphically resembles the arcade game, there are a few missing frames of animations and explosions from certain enemies. Worse yet, the music doesn’t sound as nice on the system’s hardware. While it retains the same soundtrack, it’s hampered by the inferior audio quality which can be somewhat distracting if you’re more familiar with higher quality instrument samples in the original version (and its early ports). On the X68000, it actually sounds like something more akin to the Sega Genesis version (more on that in a bit).

Also, there are no restart checkpoints after dying. Instead, your ship respawns almost instantaneously and continues forward. This can potentially make the game even more difficult for players since it does not provide new options drones or shields at any other points that their normal placements. If you lose a life while using the helper drones, you do have an opportunity to recover them while they’re still on screen. But there’s an inherent risk of not being able to recover them if you were positioned near the left of the screen upon dying since the game still scrolls forward during the few seconds it takes for your ship to respawn. Overall, it tries to live up to the quality of the arcade original but falls short due to the limitations of the hardware. 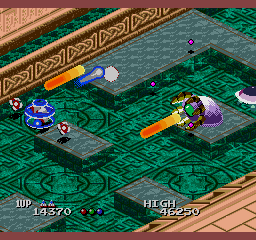 With Sega’s proven track record of porting arcade hits to the 16-bit Genesis system, it’s little surprise that Viewpoint eventually appeared on the console in 1994. Obviously, the visual presentation took a major hit. The colors are fairly drab, the graphics flicker when there’s action all about, and there is slowdown galore in certain sections. Beyond those glaring flaws is a game that deserves props for staying loyal to is source material. The Genesis port does an admirable job of capturing the spirit of the original arcade game. While certain details in the environments had to be either scaled back or completely removed, it cannot be denied that much effort went into keeping the level designs as faithful as possible.

Like the Sharp X68000 version, the music from the arcade original is here, albeit not quite as impressive. The game lightens up on the difficulty by cutting the stamina of each boss nearly in half. Plus, the limitations of the Genesis meant reducing the number of enemies that can attack at once. The game also includes secret warp spots to skip stages and a special “P” icon that replenishes your shields and bomb stock. So while this port of Viewpoint has some noticeable omissions that will readily be noticed by anyone who has already played the arcade version, the game is still enjoyable on the Genesis nonetheless, especially since it’s relatively easy to find for cheap these days. 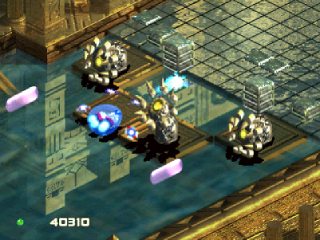 In 1995, the game received one final port on the PlayStation. This version was developed by Visual Concepts and published by Electronic Arts. Unfortunately, the game was stripped of nearly everything that made the original version fun and exhilarating and replaced it with lackluster elements that added little value besides the allure of playing it on a then new 32-bit console. As was the case with many early PlayStation games, Viewpoint opens with a full-motion-video sequence complete with cheesy dramatic music and slow-moving “action”. The in-game graphics were given a darker hue of color along with a static look to the environments. The end result is a grittier tone which kind of sucks the fun out of the experience. The stage layouts, bosses, and overall difficulty have not changed from the original version, but those are practically the only things that remained intact.

The biggest offense by far was altering the awesome soundtrack from the original game. The music was replaced with rather mundane throwaway early 90s techno\house compositions. The music ranges from dark to downright annoying once you reach the boss in stage 5 and you hear some random voice scream “we’re gonna die”! To put it mildly, the soundtrack is very off-putting and fans of earlier versions of this game won’t be easily won over. If you’ve never played Viewpoint on the PlayStation, you aren’t missing out on anything. This incarnation of the isometric shooter is a painful reminder that a console’s hardware prowess means nothing if the developer doesn’t use it properly. 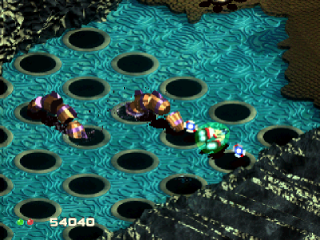 Despite its lofty demands, the intricate design of each stage and the bold choice of soundtrack proved to be a nice trade-off for the effort required to successfully progress. Viewpoint is rife with challenges that aren’t for the faint of heart. But it can also be a fulfilling endeavor, especially for the shoot-’em-up fan. Just remember that your mileage may vary depending on the version you play. If you happen to have the funds and resources to track down a copy on the NeoGeo or Sharp X68000 systems, then, by all means, go for it. Beyond that, your mileage will vary with the other diluted versions. 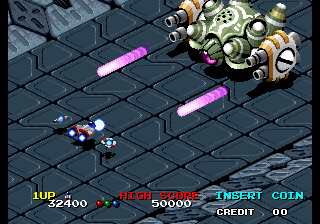 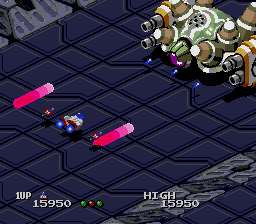 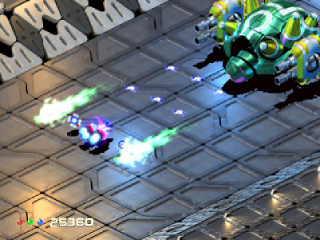