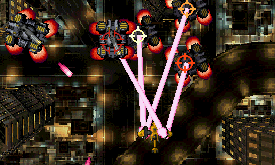 One of the coolest moments of Taito’s Rayforce (hilariously also known as Layer Section, also known as Galactic Attack, also known as Gunlock) was when your ship began its descent from outer space, dove into the atmosphere of an Earth-like planet, and began fighting bad guys above the ground. There were floating platforms, held together by some kind of structure, and if you destroyed them all, they’d plummet helplessly into the sea below. It was all done with sprite scaling and other kinds of clever graphical manipulation – stuff that looks a bit cheesy now, but was damn impressive back when Mode 7 was a selling point. 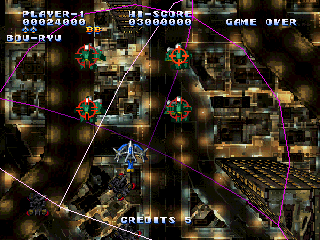 Of course, Rayforce‘s successive games, the two Raystorms, completely changed gears and went 3D, using polygons instead. The spiritual successor, Eighting / Raizing’s Soukyuugurentai, sticks mostly to sprites and carries on that legacy. It’s published for home platforms only in Japan by Electronic Arts, of all people. The name means “Blue Sky Crimson Lotus Squadron” or something like that, although its English title used in the rare Western release is simply known as Terra Diver. Soukyuugurentai is largely amazing because it gives a tremendous sense of depth and scale to what is basically a 2D game. In vertical shooters, it’s always felt like you’re floating on top of the scenery rather than soaring above it. There have been all kinds of visual tricks, including multi-layered scrolling, to try to emulate the feeling of flying through the sky, but from a gameplay standpoint, it’s always been a bit limited. Games like Xevious and TwinBee – and Raystorm, for that matter – divided enemies into “air based” and “ground based” – air based enemies should be shot with your regular weapon, while ground based enemies needed to be bombed using some kind of small targeting cursor. 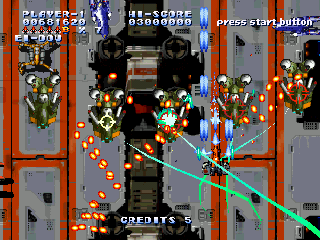 Soukyuugurentai removes this disconnect completely by giving you a huge targeting grid, enabled by holding down the fire button. This system is called NALS – No blind spot All range Laser System. Anything that flies into it, regardless of their elevation, will be targeted. Let go of the button and you’ll unleash a torrent of homing missiles, which can take down several foes at once if it’s timed right. There are three ships (four in the PlayStation version), each with two different targeting cursors that you can toggle between – some are narrow cones, others are huge spheres – and most cover huge portions of the screen, so this is a pretty powerful weapon. The result is a shooter that feels like it lives in three dimensions, even though it only technically plays in two. 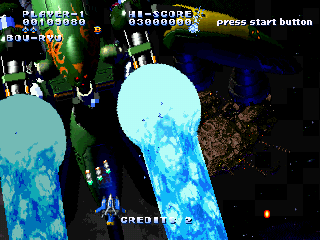 You have a standard gun too – your primary weapon is a standard forward shooting gun that gets more powerful as you pick up “P” icons – nothing too innovative there. But all of the best shooters are about crisis management – how well can you perform with the tools you’re given. The targeting system could technically be seen as overpowered, because it has unlimited use. But while it’s activated, you can’t fire your primary weapon, requiring you to attack indirectly or just dodge enemy fire. Soukyuugurentai is all about balancing these two weapons, so you can destroy as much as possible before you’re overwhelmed. Like most vertical shooters, you have plenty of screen clearing bombs to use in panic moments, although they feel a bit extraneous with the homing missiles and all. 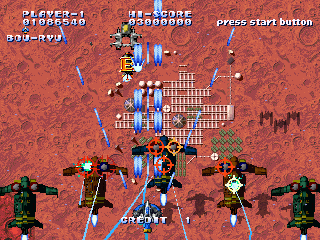 There are plenty of other moments with Soukyuugurentai‘s design really shines, especially when it’s directly channeling Rayforce. One of the best moments is somewhere in the middle of the third stage. The battle starts in the heights of the atmosphere, but you bury through the clouds and start slowly descending towards the ground. From miles above the earth, you see a hapless convoy, first as small as ants, slowly grow bigger and bigger until you’re swarming right next to them, sending a barrage of missiles into the defenseless trucks, sending them tumbling to a flaming doom. It’s pretty breathtaking. The segment right before the final boss is equally as fascinating – the music goes quiet as you slowly hover above some kind of gigantic machination, before descending down and dismantling its segments piece by piece. 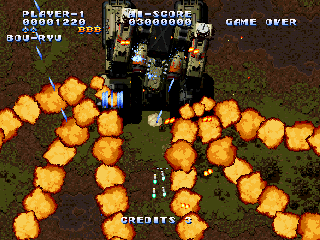 And there’s actually a sense of scale to the boss battles. In the older days, shooters used to impress us with enemies that were the size of the whole screen – or sometimes, large enough to the screen would have to scroll around just to show it all. Soukyuugurentai isn’t nearly that cheap – its gigantic bosses are so huge that the screen needs to zoom out, SNK fighting-game style, just to give you a full view of them. The Saturn version has a hidden option menu that allows you to zoom in and out at will, which is incredibly cool. This is a rare instance arcade vertical shooter that doesn’t use a vertically oriented monitor, and being able to zoom out does help it feel a bit less cramped. 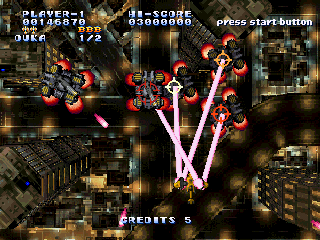 Soukyuugurentai is usually compared to Radiant Silvergun for a number of reasons – not only is it one of the most damn fine shooters for the Saturn (both also originated on the Sega ST-V Titan arcade board) but both share similar aesthetics. Both are somewhat oppressive, taking place in some post-apocalyptic planet, although while Radiant Silvergun features bright variations of brown, Soukyuugurentai is much darker. Silvergun plays more clever graphical tricks, although Soukyuugurentai sticks to sprite-based boss, as opposed to the blocky, polygonal ships in Treasure’s game. Both also feature soundtracks by Hitoshi Sakimoto. But Radiant Silvergun‘s triumphant orchestrations – a bastard brother of Final Fantasy Tactics – are more upbeat than Soukyuugurentai‘s brooding tunes. It’s more electronic and industrial, filled more with pounding drums than blaring trumpets. There’s a main motif that pops up in a few songs, which lends a lot of personality to the soundtrack. There are only six stages, but with each boss getting its own theme, it makes for a well rounded selection of music. The plot is related through huge Japanese typeface superimposed onto the screen, not unlike the anime Neon Genesis Evangelion. Said plot has something to do with terrorists, which is fairly typical stuff, but it lends to the urgency of the atmosphere. 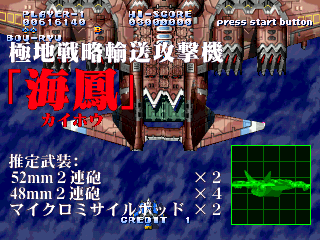 Being an ST-V game, Soukyuugurentai saw a perfect arcade port to the Sega Saturn. Also included is the previously mentioned hidden option menu, which allows you to tinker with different things, as well as the complete soundtracks to Kingdom Grand Prix / Mahou Daisakusen and Battle Garegga, two of Eighting/Raizing’s earlier shooters. Strangely, the game comes programmed with a half-English mode – that is, if you play the game on an American or European Saturn with a converter cartridge, some of the text will be in English, including the character names and some of the briefing text. However, not all of it was completed, and some of the graphics, like the end of level score tallies, are completely garbled. A later budget release, Soukyuugurentai Otokuyo, fixes these issues, in addition to including a playable demo of Battle Garegga. 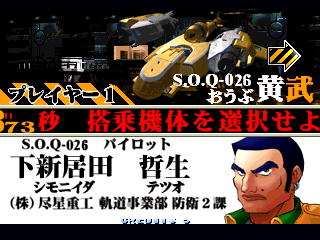 A PlayStation version was also released, subtitled “Oubu Shutsugeki”, which is generally a bit cheaper to get a hold of. Other than some slowdown in a few places, and the lack of the bonus menu, the game’s about the same. There’s an “arrange” mode which changes some minor game features, plus a bonus ship, but nothing too major. There are also some really lousy full motion video cutscenes – an intro showing the ships, as well as midgame cinemas that shows your ship flying between levels and detailing newspaper clippings that presumably detail the plot. None of these are interesting, but it’s an okay port if you can’t get the Saturn version. Both offer limited credits, although with the game at the lowest difficulty level, it’s reasonably easy to see the game through to the end, but challenging enough if you set it at hard. 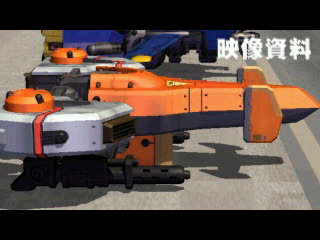