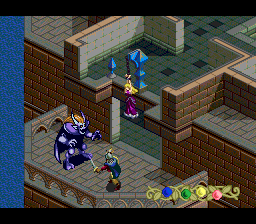 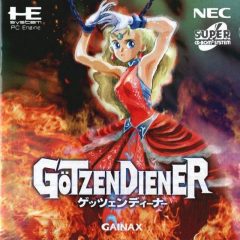 The “damsel in distress” trope has been used in fiction since time immemorial, so it’s refreshing that the PC Engine title Götzendiener (which means “idol worshipper” in German) flips in on its head. You control the princess Kish Lim Mihsa, who has been abducted by the demon lord and is kept chained in a dungeon for use as a sacrifice. A rescue team is sent after her, but all of them are killed before they can fulfill their mission. Kish takes matters into her own hands, frees herself, grabs a sword from one of the fallen warriors, and then begins her own escape. 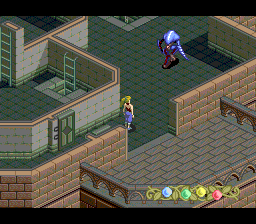 This is an awesome premise, but unfortunately it’s ruined more or less immediately after the introduction. It’s an isometric adventure game, which combines the awkward diagonal movement of games like Sega’s Landstalker, with the sluggish movement of cinematic action games like Prince of Persia. Much of the game consists of dull combat and boring puzzles. There are a whole lot of empty rooms, and while the layout isn’t particularly complicated, you spend a lot of just wandering around. While it’s not unplayable, it’s just as well, since is both incredibly easy and very short, and can be beaten in less than an hour.

It’s a shame, because there’s a great premise behind it. The game was intended as a tie-in with a story that began in Dengeki PC Engine magazine, written by author Hiroe Suga, and was later issued as a complete novel. It provides context for the story and characters, but very little of that is present in the game, which has sparse text and only a few cinematics. It was clearly meant to be read alongside the novel, but that’s not much use for non-Japanese readers. The artwork is by Takami Akai, known for his designs for the Princess Maker series; the game was developed by Studio Alex, the team behind the Lunar games, and the scenario was even written by its founder, ex-Xtal Soft and Falcom employee Kazunari Tomi. 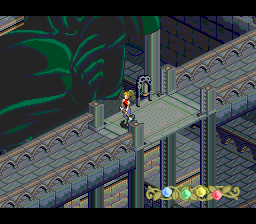 This game was produced by anime studio Gainax, who later had a reputation for releasing incomplete products (the last episode of the OVA Gunbuster was released in black and white as it was believed they ran out of money for color ink; the TV series of Neon Genesis Evangelion had a famously inconclusive finale). As a result, Götzendiener has earned a similar reputation, of a game that was clearly shoved out the door in an incomplete state.