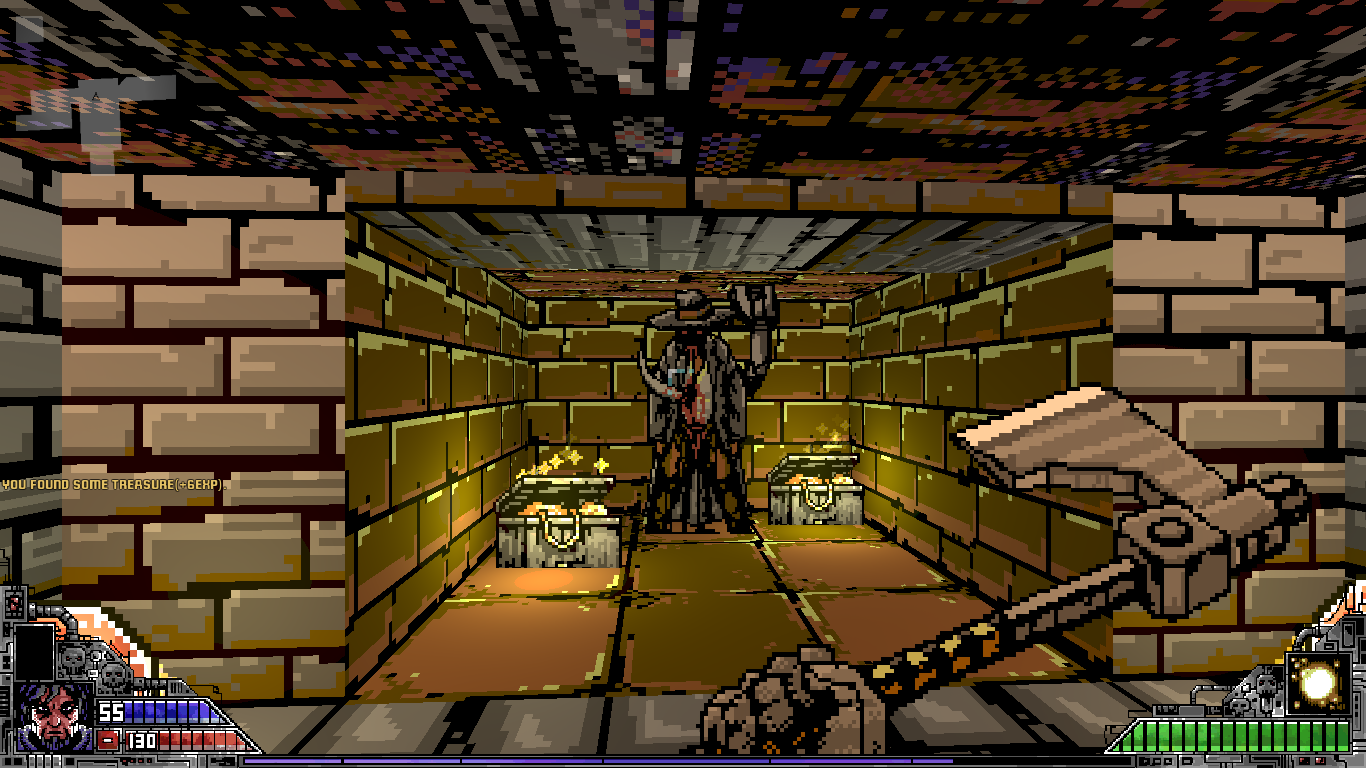 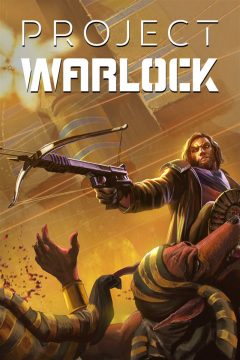 We are in a golden age of classic FPS send-ups, from the haunting DUSK to the revival of DOOM. Indie and big budget giants alike are going all in, but one thing notably missing from this movement has been that all of these games had mandatory Y-axis controls. Project Warlock lets you turn that off and let auto-aim make up for it, just as Wolfenstein 3D and DOOM intended. Every other boomer shooter has tried to offer a unique twist on the classic formulas. Project Warlock takes the most classic of the formulas possible and shoves in nearly every single idea from modern shooters and other throwback shooters in levels where you never once have to look up or down. The end result is a furious, blood pumping action masterwork, the sort of thing you only get from someone born after DOOM came out and catching up with the classics for inspiration. 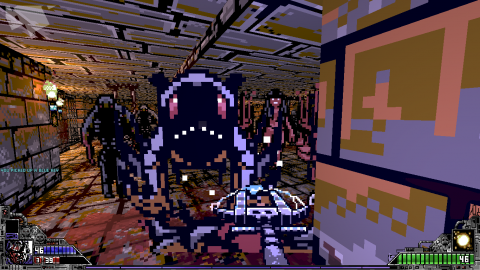 Project Warlock is mainly the creation of one Jakub Cislo, a Polish then-teen living in Germany who was introduced to classic shooters through his father. He loved their fast pace and how the complex map design made him think. Project Warlock finally released when Cislo was 19 and barely out of high school, and he had been working on it for years before then, releasing a Kickstarter for the then named “Exitium 3D” in 2016. He got 205 euros from fifteen backers with an extremely bare description and plan. A lot changed within those two years.

Cislo being so young and playing with a style of game so old is the key to Project Warlock‘s refreshing feel. It’s not really designed like other throwback shooters. It doesn’t so much build on old formulas with new techniques as it takes the most basic original one and shoves features in every nook and cranny. The level designs are fairly simple – all 90 degree angles, and no height, so it’s basically like Wolfenstein 3D in that respect. Your character, the warlock, can level up with gathered experience from collecting treasure and killing enemies, which earns stat points you can put into your stats to build up your melee damage, health, magic points, and max ammo capacity. This lets you create a unique build ala an RPG that can change each run you do, and this is further expanded with what upgrade points can do. 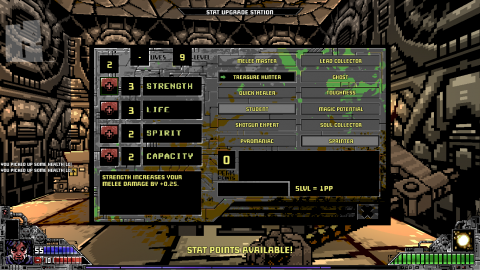 Upgrade points are a separate thing, which you can find in secrets and naturally during levels as big, spinning stars. You can use them to unlock any spells you have found in levels, and also upgrade any of the weapons you’ve collected. There’s a wide variety of spells that give offensive, defensive, and even support options, including a punishing stationary lightning ball AOE and an ammo refill. They can also come out easy, requiring just a tap of the alt-fire button.

Weapons upgrades is where the game’s real fun comes into play. Everything but your weird knife fist thing can be upgraded, and often into a variety of references to other popular FPS games. Your garbage starting revolver can either become a Blood style flare gun or a handcannon that makes the base shotgun obsolete. Sure, you can dual wield your SMG, or you can turn it into a nail gun that ricochets its hard nail projectiles on walls. Want a rail gun? Just upgrade the late game energy gun, or you can go for a rapid fire variant. It is absolutely wild what toys you get to play with. 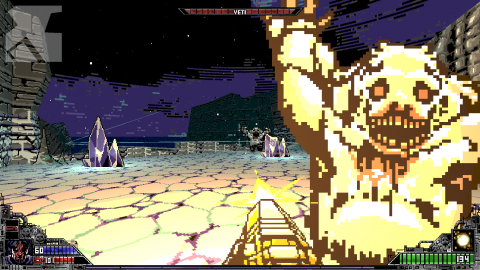 The arsenal does have some balancing issues, though. The flamethrower is effectively worthless, its close range carnage made pointless by the impressively punishing ax, and its distance variant upgrade is outclassed by most every long distance weapon you have. The shotgun’s higher damage upgrade destroys its spread and is kind of pointless after getting the revolver’s damage upgrade (even if it eats through ammo very quickly). The late game BFG called the chain reactor is slow to launch and has an odd effect where it spreads out death orbs with each hit its orbs make, and only deals damage if you hit initially. While it’s nice to have the crossbow, it feels kind of pointless in a game that lets you stack two more barrels on a super shotgun or throw frag grenades that turn entire rooms into death.

While this would be a major issue in any other FPS game, Project Warlock‘s RPG level and upgrade systems manage to overcome this issue a bit by giving you a ton of crazy toys. That focus on customization makes each run different, and it’s hard to say anything is OP when upgrades make almost every weapon in the game OP (though the chaingun upgrade that gives double damage with no extra ammo cost and no windup is maybe a bit too OP). What makes the lesser guns lesser is that the hordes you’re going against are large, varied, and punishing, so certain weapons just don’t do the trick once you start running into rocket shooting mechs and meaty Shambler tanks. 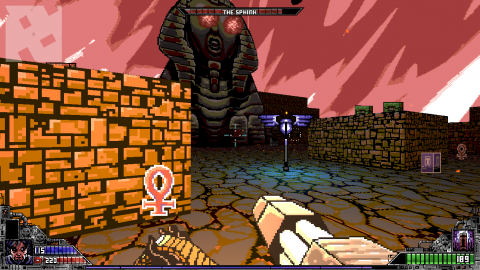 Almost every enemy in the game comes from another FPS game you may have heard of, from the Gnaar mummies to the shrunken Shogo mechs. Others just fit the theme of the five worlds you visit, like fireball shooting succubi in the haunted castles or charging yetis in the arctic. It gives the game a very chaotic feel, with no real unifying aesthetic choice beyond the lively sprite work, with exception to the hell levels mixing elements from all past worlds with unique hell bits. This fits the very loose world-building and the blistering combat, very much a game’s game sort of game.

What’s also interesting is that the worlds do feel like the places they’re trying to be, much unlike DOOM and more like Duke Nukem and other Build engine games. You’ll find yourself in military city shootouts and Egyptian tomb crypt runs, with fitting back tracks the entire way. You’re always in an interesting space, but it’s abstracted enough by the simple graphics to make it feel otherworldly. It feels simultaneously old and new, helped by the extremely loud lighting effects on higher settings. The sprites and many of the tiles also have thick black outlines, giving it a real comic book style. 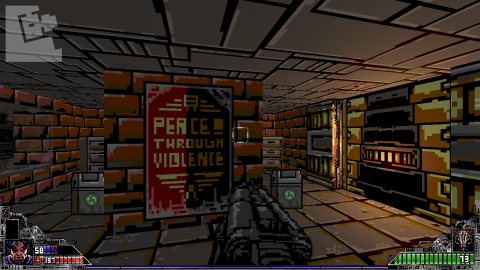 The maze structure also avoids a few old school design sins, each level generally being pretty short, but offering a lot of surprises to discover if you’re willing to look. For those who love wall secrets, you will love this game. It’s also recommended to secret hunt, since spells and upgrade points are often hidden away, and like any good FPS, you can get your hands on new weapons early in secrets. There’s an onscreen automap, and the game even lets you see how many secrets are in a given map when you pause, helping you keep track of what’s left to find.

You may have noticed by now that there has been no mention of a story, and it should not surprise you to learn that Project Warlock, inspired by the classics, barely has one outside world clear screens. Basically, the warlock is traveling among worlds conquered by evil (aka the devil) and shooting evil in the face because he hates it. It is the most excuse plot that has ever excused in a rather charming way, with the text dumps having that overblown prose of the classic id Software era. Credit also goes to the game’s ending, a pretty clever last minute development that seems fitting for this genre in particular. 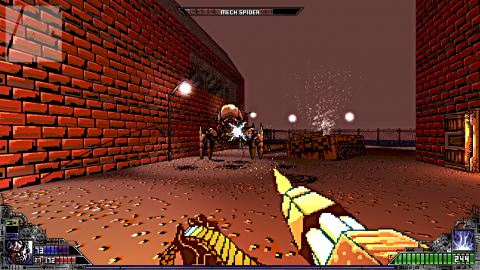 This is all great, though you should be warned that like most any RPG, starting Project Warlock has some pained early moments. Your early game arsenal isn’t great, and enemies are placed in large numbers from the start. It’s not helped by the lives system, where you get a game over if you die too much. Also, you have to complete a chunk of levels, usually three or four, to reach your base to cash stat and upgrade points. You can return there at any time, but it costs one life and you have to start that string of levels over again. Play on casual if you have to, it’s just normal difficulty without lives. Once you get used to the difficulty, feel free to switch to normal, there’s plenty of lives so you can build up a surplus pretty fast.

Project Warlock is just twelve bucks and it still getting updates today, including some re-balancing for the early levels (though they’re still a bit of a challenge). It may be one of the best releases in the boomer shooter movement and is well worth a play for anyone with a love for the classics, or even those interested in the genre (though you may be better off starting with DUSK on lower difficulties). It can lag on lower end machines, even with the fancy lighting effects turned off, so do be aware.