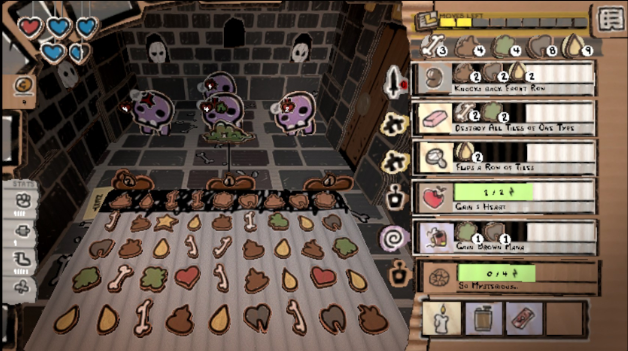 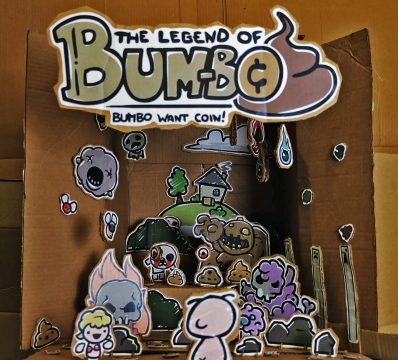 If you’re familiar with the work of Edmund McMillen (Super Meat Boy, The Binding of Isaac, and many, many Flash games about dead babies) then it will come as no surprise to you that the grid in his tile-matching puzzle roguelike The Legend of Bum-bo is composed mostly of poop, pee, bones, teeth and snot. Sorry, not snot; boogers.

Anyone familiar with The Binding of Isaac: Rebirth, should remember Bumbo – a combination of ‘bum’ and ‘Rambo’ – a passive item you can pick up with the description “Bumbo want coin!” This generates a small floating head that follows you around, picking up stray coins. After collecting six coins, Bumbo gains a body and will rarely drop random pickups. Six more coins and Bumbo grows larger and starts firing tears the same way Isaac does. Twelve more coins and Bumbo reaches his final form, chasing enemies down and dealing constant and heavy contact damage, while occasionally dropping active bombs to deal even more damage. Bumbo is far from the best item in the game, but he’s a fan-favorite and a beloved part of many successful runs, which is why it wasn’t that surprising when Edmund chose him to be the star of his own spin-off title. 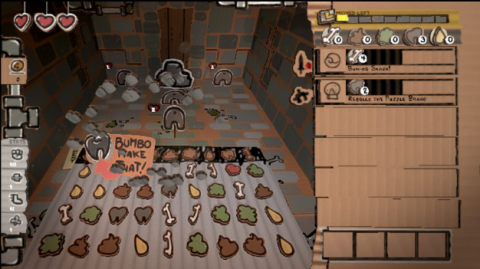 “Bumbo want coin!” is also a fairly accurate summation of the story, told in an opening cutscene that features Edmund’s trademark combination of toilet humor and scribbly, flash-style animation. The narration, provided by Bumbo himself, explains how Bumbo was happily living in a box, with his trash and his coin, when a bad guy swooped in, stole the coin, and disappeared down a hole. That’s all the plot you’re getting and that’s all the plot you need. The final endings of the game reveal that there is a little more to the story, but needless to say, it ends up tying in to his appearance in The Binding of Isaac.

The presentation of The Legend of Bum-bo (now hyphenated for the spin-off) is great, with the stages, enemies, and Bum-bo himself all having the consistent appearance of animated cardboard puppets, making the game feel like the homemade project of a slightly disturbed but very creative child; an ongoing theme in Edmund McMillen’s work, and no surprise if you’ve seen Indie Game: The Movie. Ridiculon also return from their previous work on The Binding of Isaac: Rebirth and The End is Nigh and provide another great soundtrack, including a credits song ‘Bum-bo got Coin!’ which you really just have to hear for yourself.

Each stage is presented as a single room with multiple enemies, moving towards you in three columns, and all Bum-bo has to defend himself with is a grid filled with the tiles we mentioned earlier. You can move rows or columns however far you’d like, but you have a limited number of moves per turn. Each type of tile fulfils a different purpose; bones and teeth are used to attack the enemy, boogers prevent an enemy from moving for a turn, poop allows you a place a shield in any column to protect from enemy attacks, pee gives you an extra move, and writing a sentence like this with utmost sincerity provides a great opportunity to re-evaluate your life choices. 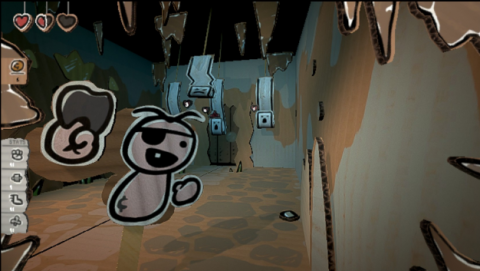 Lining up five or six tiles at a time will amplify your reward, giving you more bonus movement, preventing enemies from moving for multiple turns, spawning multiple shields, letting you attack multiple times (bones) or launch a single, more powerful attack (teeth). Lining up the maximum seven tiles will activate a special move – and unlock an achievement – with an appropriate reward, like attacking every enemy at once, or spawning maximum shields. There are also rarely-appearing heart tiles which can replenish health, and star tiles, which act the same way as blank tiles do in Scrabble, fulfilling the role of whatever tile you need to create a match.

Lining up these tiles correctly also gains mana, so lining up four bones would launch an attack and also gain you four bone mana. Mana is used to cast a variety of spells; the first character, Bum-bo the Brave, has a ‘Bum-bo Smash’ attack that costs four bone mana and deals three damage, and most other spells in the game are used to attack, defend, regain health or reroll/rearrange the board in some way. There are also more traditional spells you can learn which don’t cost mana, but run on a timer, so you can only use them once every one, two or three rooms.

Each level consists of one room, followed by the chance to choose a new spell, then two more rooms, another choice of spell, and then a boss battle. Every time you beat a room, you’ll be rewarded with a small number of coins (or a large number for defeating a boss) and there’s a lot that you can buy at the shop between levels. A lucky dip can reward you with items or upgrades, but most often than not you’ll just lose your money. You can increase the power or reduce the cost of your spells; for spells that cost no mana but rely on a charge, it increases how frequently you can use them. But the most vital feature of the shop is the roulette wheel that randomly increases one of your stats, be it health, tile damage, spell damage, movement, or giving you twenty coins in return for the fifteen you paid to spin. 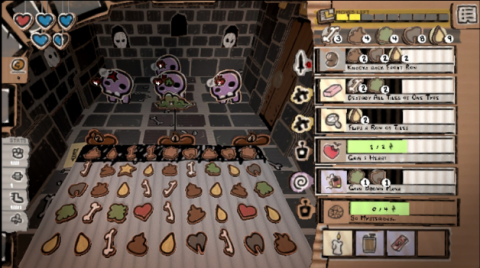 Likewise, there’s a variety of unique unlockable characters. Bum-bo the Nimble gains one bonus mana in each category from every attack, and has a spell which increases in damage the more it is used (although regrettably this resets at the end of each room.) Bum-bo the Stout gains mana twice as quickly, but can’t stockpile it, so if you don’t use it in the same turn, it’s gone. Bum-bo the Weird starts with low health, but gains one extra move every time they kill an enemy, turning early floors with multiple weak enemies into an absolute cakewalk. Every character has their drawbacks, but none of them feel too challenging to play as, and a single upgrade can drastically improve your chances for the rest of the run.

That said, the game isn’t flawless. Shortly after you get the hang of it – enough to win a few runs, at least – one of the features you unlock is increased difficulty that cannot be turned off and mainly manifests in far fewer coins being rewarded at the end of every room, which means you have less money to modify your spells or increase your stats. Also, the gimmick of the final character in the game is that their spells reroll in every single room, forcing you to constantly adjust your strategy, which is interesting, challenging and fun.

Bum-bo also definitely isn’t as infinitely replayable as The Binding of Isaac, but that’s by no means a bad thing. Bum-bo will take you a solid 15-20 hours to beat if you’re looking to unlock every character, and 25-30 hours if you’re looking to 100% the game, depending on your luck. It might be less value for money, but it’s easier to recommend Bum-bo because a game that you can play sporadically and still finish within the week is much more convenient than a game that you can marathon nonstop for a week without even unlocking all of the characters.

In short, The Legend of Bum-bo is an entertaining spin-off that doesn’t quite escape the shadow of its predecessor, but part of its charm is that it’s not trying to. Hopefully Edmund McMillen goes on to make more spin-offs about every single item in The Binding of Isaac, in which case, The Legend of Bum-bo makes it one down, five hundred and fifty-six to go.

You can probably skip Butter Bean though, Edmund.