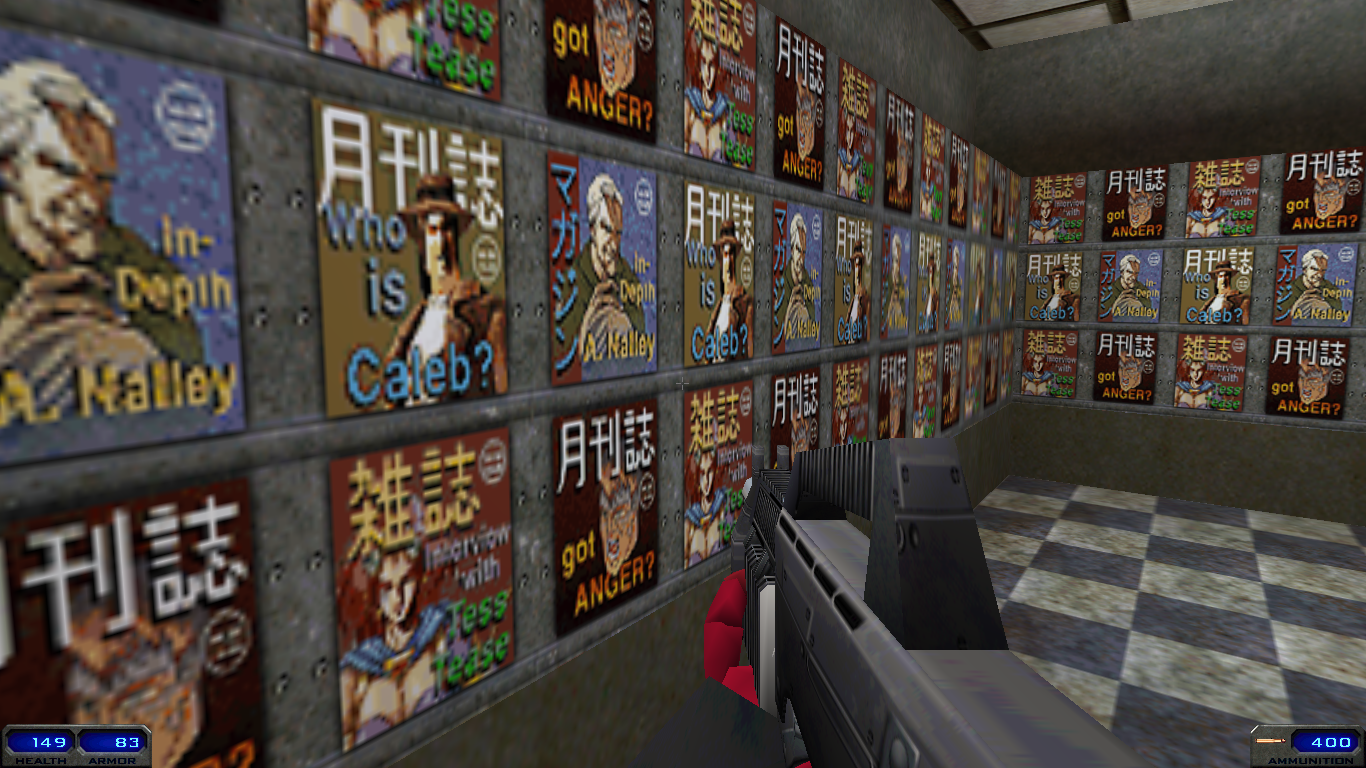 Shogo: Mobile Armor Division was the fourth game from Monolith Productions, the people behind Blood and Claw, and it is probably the most distinct in a background way sort of thing they ever released. Not the best, not the worst, but very distinct in what it was, that being a whole lot of anime fandom. Where something like Shadow Warrior felt mainly like confused weeb posting in a Duke Nukem 3D framework from some Bruce Lee movie fans, Shogo had its pulse on what anime was from a western weeb perspective nailed down perfectly, including the city night aesthetics, ultra violence, and awkward love triangles. It’s almost enough to make up for the game being very much unfinished. 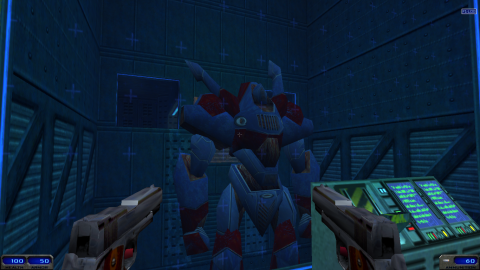 Things were not going well for Monolith at the time. Not only were they working with a new in-house engine and entering the complicated world of full polygonal 3D, they were also developing Blood II: The Chosen, a development cycle that calling troubled would be like saying John Carmack and Tom Hall didn’t get along. Trying to make an extremely ambitious sequel in a year with a publisher currently being bought out not caring at all about the fate of your studio indeed caused a lot of problems.

Shogo fared better, but it was still their first game made in their new Lithtech engine. If it was just aiming to be a sort of Quake-like with a simple shoot bang set-up, that would be fine enough, but Monolith had storytelling ambition. Shogo had a lot of lore and narrative in it, and really tried evolving what an FPS could be this way, even beating Half-Life to the scene by a whole month. But thanks to some poor planning for the ambitious scope and the Blood II development implosion that nearly sank the company when it was all said and done, Shogo‘s execution of its narrative was not ideal. 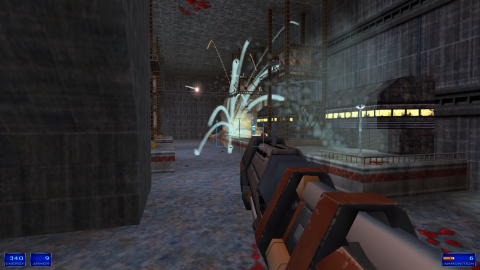 The idea here is very 90s mecha anime. The universe is currently in a rush for control over a special sort of reactant called kato, and protag Sanjuro is a soldier for the United Corporate Authority caught in a multi-faction war for it. The other factions are the CMC, the mysterious rebels known as the Fallen, and the eventual reveal of the military corp Shogo as a major behind the scenes player. Sanjuro is more focused on his dead brother Toshiro, dead friend Baku, and dead girlfriend Kura, all gone thanks to the Fallen rebels. He’s also dating Kura’s sister Kathryn on the rebound, who is also dating him after dating his brother, also on the rebound. In his words, it’s kind of complicated. However, things soon prove to be far more complicated then dating one’s dead girlfriend’s sister, and Sanjuro finds himself in a position to end the conflict once and for all.

The tone of this game is like a mildly well dubbed OVA mech anime mixed with an edgy 90s shooter, perfectly captured with a music video intro of a peppy J-Pop song ending with the lyrics “I know we can make it together!” played over in-game explosions and gibbing. Everyone fits into a clear archetype of these sorts of stories, and the actual ideas here could have made for a gripping story. Sadly, there wasn’t time to make proper cutscenes for the sheer mountain of lore and backstory, so exposition dumps are used instead to lesser effect. Though, there’s still great touches here in its homage, including a completely nonthreatening re-occurring antagonist who keeps coming back no matter how much you blow up her mech ala the Donronbo Gang from Yatterman and the countless anime villains they’ve since inspired (including Team Rocket in the Pokemon anime). It has the tone and many a funny moment, even in the vocal performances, just not the structure to make the core story have impact. 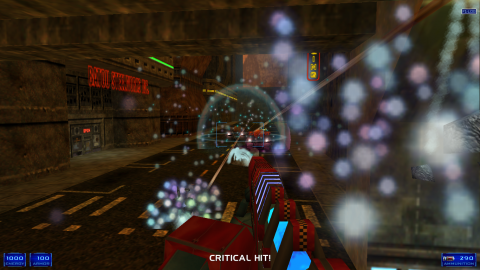 You can also see the seams in the gameplay proper. The mech segments have aged fairly well, giving you a ton of fun explosive weapons that pack a real punch. They also control like any other FPS, so there’s no learning curve. Mechs are also way more durable, so there is plenty of room for error. The on-foot segments are not as kind, especially if you don’t remember to knife boxes to get armor and supplies. The gun play is lethal and satisfying, complete with a great shotgun, but it’s all compromised by the AI.

All enemies are hit-scanners, and they react extremely fast, noticing you very quickly and firing almost instantly, even when their back is turned. You can stun-lock them with one of the bullet spewing guns you get to avoid this (they all do sthe same damage but have different firing rates), but since they’re often placed just around corners, you can’t expect to really play this game without a lot of quick loads, especially if you don’t have armor. Your guns are deadly, and so are theirs, especially when they have a rocket launcher, and ESPECIALLY when they’re placed right behind a quick opening door with a rocket launcher. You don’t really get time to react and have to approach combat more like you would in a modern third person cover shooter, taking your time and planning your next move very deliberately, but often with messier results. 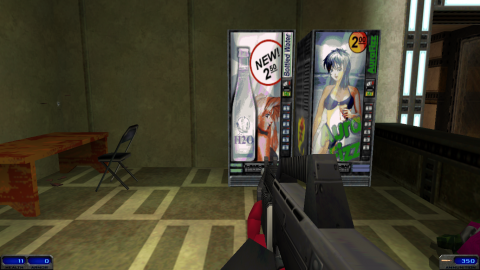 The one unique gameplay addition here is the critical hit system, which seems to be entirely random. Like in an RPG, sometimes you’ll do extra damage with a shot, and the same applies to your enemies. It can also restore health, but actually performing a crit doesn’t seem to be in the player’s control. There doesn’t seem to be a common agreement on how this works, supposedly an upper body shot, but the hit detection allowed by the engine makes this a complete crap shoot. It’s a cool idea that could be revisited, but the complete lack of control here on when it happens just makes it feel like absurd RNG surprises.

Maps are also notably bare. Even when there are deviations in the path, there’s very rarely anything to find. One of the only major exception is an extra map you can explore in an optional side quest that nets you a Claw squeak toy that goes “magic claw!” and also there’s a cunnilingus joke at the end. The multiple floors have more inspired and slightly less dickish enemy placement, and uses holes in the floors to give you options for surprise assaults. This is not the case for the vast majority of the other maps. There’s a lot of eye candy in the mech maps, though, often having you go through city streets with lit up buildings and one of the game’s better sky boxes in the grid locked sky. 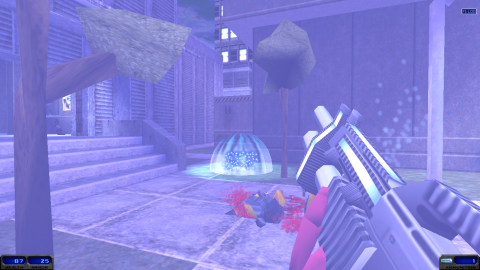 Even stuff like selecting from four different mechas with different stats feels a bit lackluster. This is mainly because they’re all fairly durable and can also get wrecked hard by a volley of explosive shots. Explosions also notably work very strangely in this game, often forming in a sphere of high damage that sometimes doesn’t work if there’s a wall between the target and the explosion. There’s also the terrible kato grenade you can get for on-foot missions, which shoots out an orb of light that sort of drifts around and explodes – and sometimes drifts back to you. You’ll only find times to use it because rocket launcher ammo is rare, and the energy grenades have a weirdly low arc that takes awhile to get used to.

Shogo sold badly and ended up having some planned expansions canned. Even its online play got some backlash for poor performance on certain modems. It has the markings of an embarrassing failure, and yet it doesn’t really feel like one, either then nor now. Monolith has made constant references to the game in many of their works, including a lore connection in F.E.A.R, and the game was brought back on Steam and GoG in a way that doesn’t earn Monolith any money from sales via middleman company Interplay. They just seem happy that their fans would want to revisit it. Shogo, for all its problems, has more fans then you’d think, and you can pin that on a mixture of its personality and the particularly interesting point of time it released in. 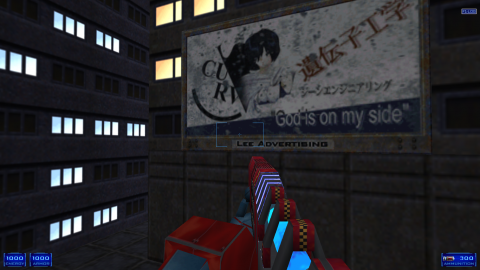 Shogo was the last of an era, an awkward transition from the traditional DOOM and Quake structure to a real-time narrative experience ala Half-Life, filled with growing pains yet a still fun core to it. It has the sophomoric, crude sensibilities of its contemporaries, but tried to take a familiar structure and even managed some stuff you weren’t getting anywhere else until a month later. Most story was in cutscene, but your actions would sometimes have surprising effect on the narrative, and stuff like the encounters with your reoccurring pest of a rival felt like a natural part of how the world worked. Shogo is a mess, but it has spunk, and it’s almost like one of my Japanese animes.

If you wanna play on modern systems, do be warned you will need to install a Voodoo 2 wrapper, or else you will get the game in a cut off window mode with constant crashing. The wrapper fixes a lot of that, despite the mouse cursor popping up in the middle of the screen every few seconds.