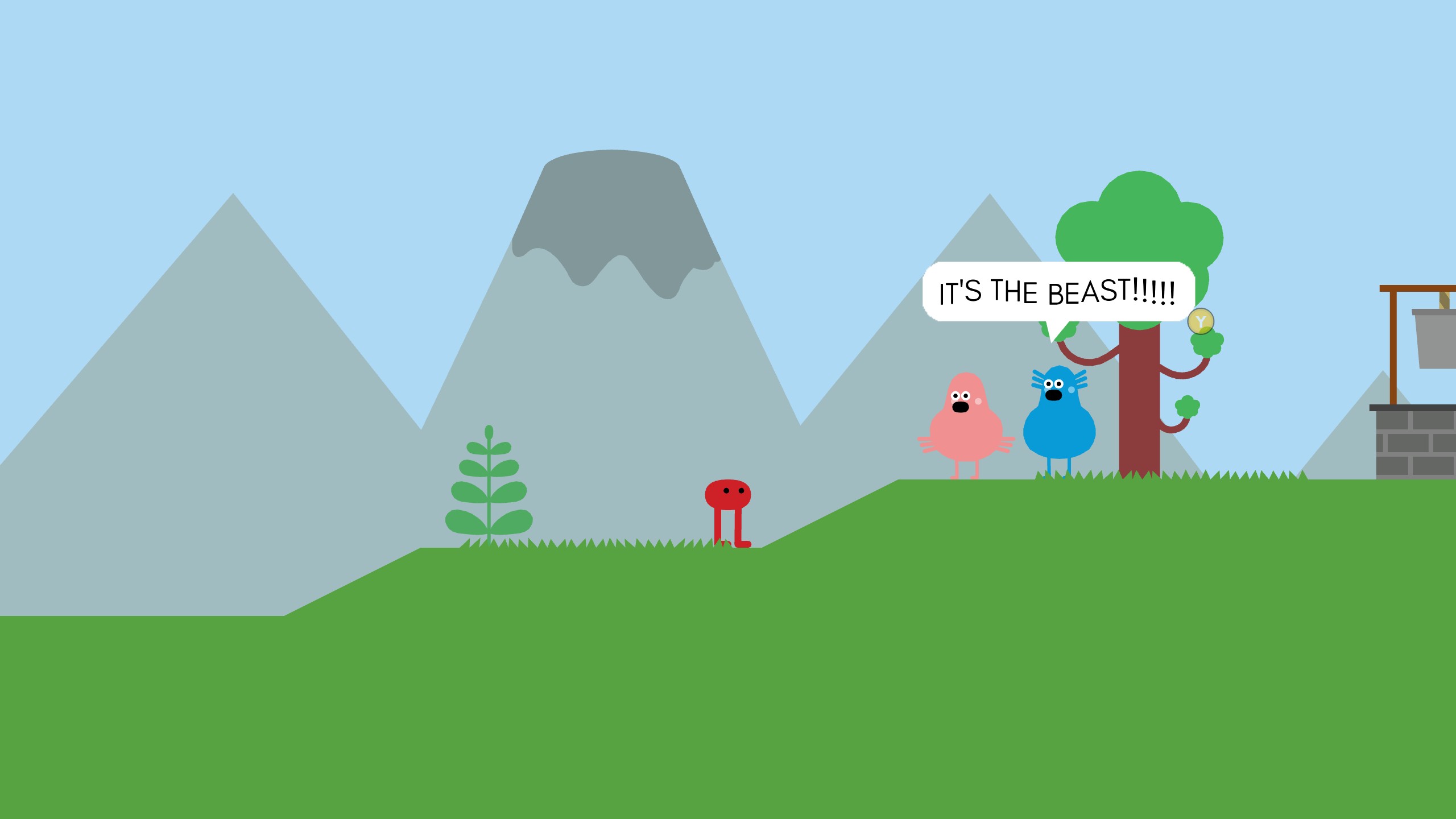 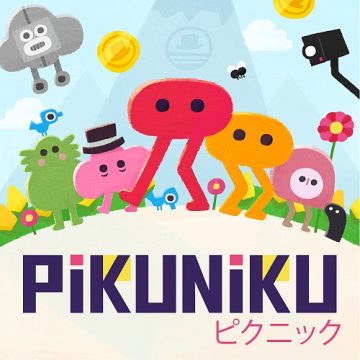 Pikuniku is a weird game. In the age of downloadable games from indie studios galore, seemingly anything can and will be created. While that does include a lot of ideas used numerous times over (e.g. retro-inspired games, “walking simulators” that are more about storytelling than gameplay), Pikuniku is distinctive enough that even among indie games, it sticks out.

Pikuniku has an art style like nothing else out there. It looks a little like the classic Mr. Men children’s books, with very limited colors and simple shapes and round designs. Or, another way to put it could be to say that it looks like what an old Atari game might look like if it were in HD but still had limited colors and simple designs. And the music is as simple as the art, with few instruments playing at once in songs that are at times twee or tinny, at other times cute and charming. The dialog is written with a very laid-back feel, with most of it written entirely in lower-case, and sentences often not even ending with a period. The game has a bit of a simple children’s book feel to it. 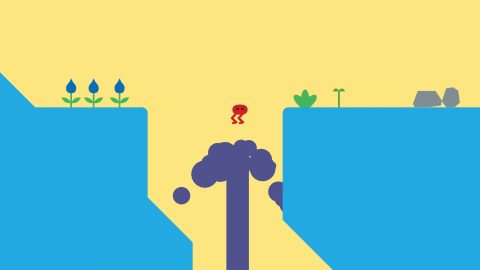 The player controls a creature by the name of Piku, a red jelly bean-like thing with two eyes, two legs, and nothing else. Piku’s gender is ambiguous, with some characters saying “they” and others saying “he.” At the beginning of the game, Piku is awakened by a ghost and emerges from a cave, and is soon greeted by distrusting townspeople who are afraid Piku may be the mysterious “beast” they’d heard so much about. It isn’t long before Piku regains the townspeople’s trust, and ends up discovering details of the game’s surprisingly twisting yet light-hearted and goofy plot. A plot which involves a cloud-shaped creature named Mr. Sunshine who is giving away “free money” in exchange for using his giant robots to take things that belong to others.

The gameplay is very simple. It’s basically a semi-Metroidvania or semi-open world 2D platformer. You can walk, jump, kick, roll around with your legs tucked inside you, wear various hats with special abilities (such as watering flowers so they grow) and talk. The game is largely based around exploring, solving puzzles, discovering objectives and then completing them. There are not even enemies for the most part! The ability to kick isn’t so much an attack as it is a form of puzzle solving. Rock in your way? Kick it. Need to knock a ball onto a switch? Kick it. Need to push a box to stack another one on top of it? Kick it. There are also hooks that Piku can grab onto using their legs, done by pressing the kick button when within range.

The puzzles are sometimes encountered while exploring the environment, such as an acorn that needs to be pushed onto a switch that activates a geyser of water that Piku can ride. Other times, the puzzles tie into the humorous story. For example, there is one point early in the game where players can talk to a spider and inquire about a broken bridge. Depending on your dialog choice, the spider either tells Piku to clean up their own mess, or teases Piku about how spiders can use their silk to repair the bridge, but since Piku isn’t a spider, “good luck with that.” What a rude spider! If you opt to teach it a lesson by kicking it, that’s the solution. The spider gets knocked across the river and its silk flies out of it, creating a new bridge. 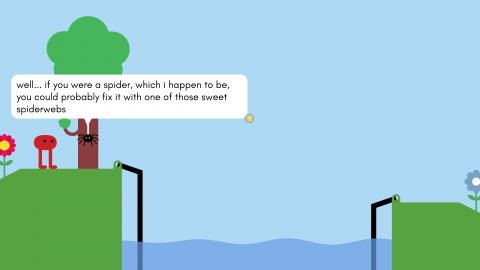 Indeed, kicking is used both as all-purpose gameplay mechanic and as a source of comedy. Players can kick the townspeople, eventually causing them to start questioning Piku’s anger management skills, before they fight back with some kicking of their own, pushing Piku around.

Comedy, really, is a major theme in the game. Some of the quests players can do, both the optional and required ones, are absurd. They include drawing a new face on a scarecrow with the help of a pencil hat, helping someone finish a song by kicking a bell, and challenging a robot to a dance contest to gain access to an underground base. Even the game’s final boss fight is silly.

Yes, boss fights. These boss fights are few, but they are among the few moments in the game where Piku can die. As Piku is limited to kicking, the boss fights consist mostly of dodging attacks, then fighting back in unusual ways, such as kicking a pine cone into a giant robot, or blocking a giant straw with your own body to prevent the robot from sucking up a lake. Death itself is nonviolent, with Piku simply becoming transparent with a surprised look in their eyes, followed by a retry.

The other part of the game where players can die comes in the form of optional challenge zones. Hidden in the game’s world are lots of optional quests, such as helping a giant bird find her newborn children that you accidentally hatched, or helping someone find out what’s wrong with their toaster. The rewards for some of these quests are either entering challenge zones, or being given items that allow the player to enter them if discovered. The challenge zones themselves involve a mixture of platforming and puzzle solving that is surprisingly difficult given the breezy nature of the rest of the game. If Piku dies here, they simply fly back to the most recently encountered checkpoint frog – a creature which only shows up in challenge zones. 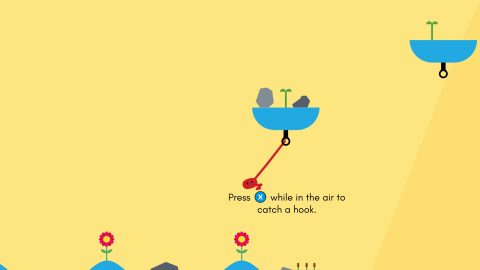 The game is short, taking roughly three hours to reach the ending if you make no effort to find secrets. But there are a surprisingly large number of secrets. They range from the aforementioned challenge zones to hidden jokes, hidden tiny dancing bugs you can watch, things to buy in shops, and the ability to play a minigame on an NES! After completing the game, there is a playable epilogue. The world has various changes that occur, with new dialog for most of the game’s characters, and any previously missed secrets can still be searched for. Pikuniku may be short, but it has a surprising amount of hidden content packed into it.

While the game is mostly family-friendly and generally as light and breezy as its presentation makes it appear, there are a few issues that players, and especially parents, may wish to be aware of before recommending it to young children. There are a few minor profanities (“damn” and “hell”) used in the dialog for comedic effect, and while most of the game’s higher difficulty moments are limited to the hidden challenge zones, there are a few difficulty spikes in the main quest. The dance-off against the robot requires players to play a Dance Dance Revolution-esque minigame that may prove too challenging for novice gamers who would otherwise enjoy the rest of the game, and the moments leading up to the final boss may be a little frustrating for less experienced players as well. There is also a surprisingly tricky puzzle late in the game involving making pipes face the direction needed to allow an electric charge through.

Pikuniku is an example of the sort of video game that could only come about as a result of indie downloadable games. It is short, trippy, charming, silly, and with its simple gameplay and limited amount of genuine challenge, the game’s appeal is more about experiencing its charming world and humorous characters rather than about the gameplay itself. It’s a trip worth taking.