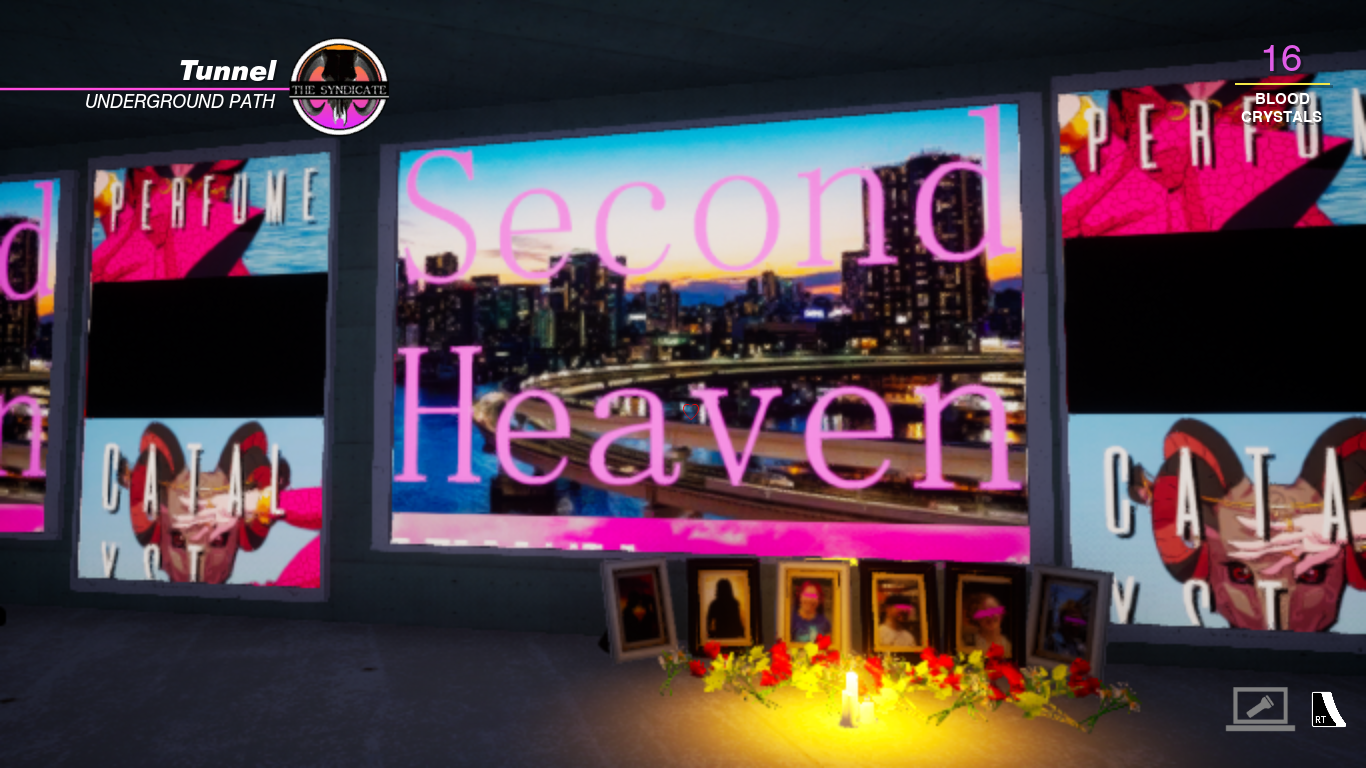 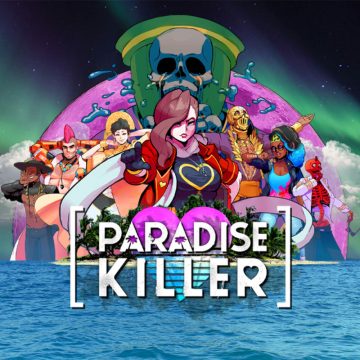 At some point in time, a mobile dev named Phil Crabtree and a big game industry vet named Oli Clarke Smith (who you may know from Until Dawn and…50 Cent: Blood in the Sand?) got together and made a game studio called Kaizen Game Works. The game that resulted from this studio creation ended up being a vaporwave-like adventure game where a skeleton is a bartender and may be involved with a mass murder. Paradise Killer is a weird creature, and it’s strange saying this when the many influences in its DNA are so obvious, but there is genuinely no game out there quite like it. 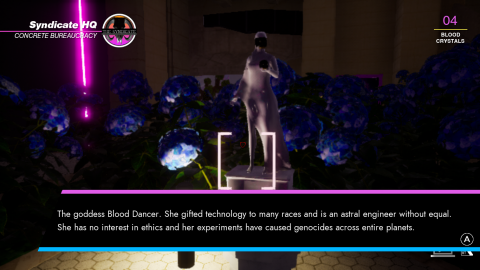 The most basic description of the game is that it’s an investigation game where you actually get to act like an investigator, gathering clues and digging for info from people of interest at your own pace. However, that fairly normal foundation is contextualized in a mess of weirdness, as the game takes place on a now deserted island in another dimension. It is ruled by a powerful council that effectively runs a cult, a group of immortals who steal people from reality to serve as slaves and sacrifices to revive dead gods. The island is rebuilt over and over to get closer to making a true utopian paradise, and as everyone moves to the 25th island as the 24th comes to its end, the council remaining on the island are suddenly and violently killed.

Your job as Lady Love Dies, an exiled ex-investigator brought back because there are literally no other investigators, is to find the one who killed paradise. To do so, you explore the entire island, looking for clues and useful resources. Your computer keeps track of all leads and evidence you find, plus how evidence and testimony connects to different suspects. This makes forming theories much easier, putting you in the proper sleuth head space. It’s honestly impressive just how well structured the investigation elements are, especially with how detailed and expansive the island is. 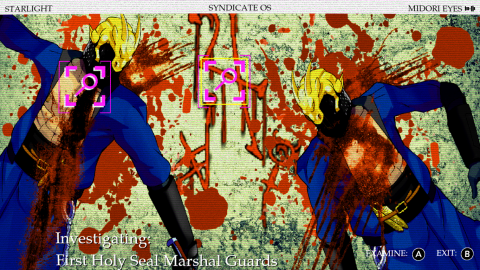 There is so much to find, and not just things related to the case. Blood crystals are scattered around (made with real blood!) that are used for buying upgrades (including a double jump and air dash), secrets, and all sorts of goodies you will need. There are a few ghosts around who need closure, and their side quests can earn some useful rewards. You can also pick up relics of the now gone or dead people of the island (citizens get mass sacrificed at the end of every iteration) for juicy lore, and it’s told in a properly off kilter way. It fits the darkly wacky vibe of the game, mixing together information on gods, consumerist trash, and the occasional grim line about the futility of life. It’s great dead mall stuff.

All of the dialog has this sort of vibe, really. The VN elements where you talk with suspects and dig for info where you can gives everyone a clear voice, and every single voice is extremely quirky or builds a strong persona, with the most normal tones coming from a woman with a goat head and that aforementioned skeleton that tends bar. The game sets the mood perfectly with an out of context heavy bit of build up text, and then the first NPC you can talk to in-person is a rude naked demon (his crotch is censored in his sprite) who constantly flips the bird with two of his four hands (those are blurred in his sprite) who mainly shitposts or uses swears when he runs out of things to swear and then vanishes with an explosion. Also worth noting everyone has vocal voice clips that play with dialog, including Lady Love Dies’ best line “Nani the hell!?” 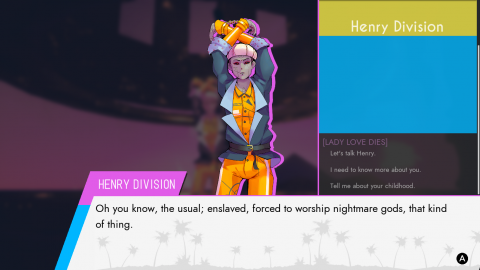 The whole aesthetic of the game is a sort of mix of vaporwave and the particular brand of punk you’d see from a Grasshopper Manufacture game, and SUDA 51 seems to have also noticed with his open backing of the game. Even common sound effects and HUD styles you’d see from a Grasshopper game, especially the Kill the Past games, are all here and accounted for, down to the creepy synthetic voice that reads names out. It’s also inspired by the likes of Danganronpa, concluding with a court sequence filled with yelling and ending with the immediate execution of anyone convicted of any crime. It is inspired by a mess of off-kilter stuff, which makes it all the more impressive it creates this unique sense of self while remixing so many familiar elements.

The key to this seems to be the context the game frames everything in, from how you interact with the world in such a limited but fleshed out manner to just what even this world is. There’s powerful Silver Case atmosphere, bringing the idea of a dehumanizing urban sprawl and class struggle in the most cartoonishly obvious way, but obfuscating things enough that you don’t always pick up on it and then a character just reminds you “oh yeah the mass human sacrifice ritual is done already.” The brilliant bit that makes this work is that you experience the world from the perspective of Lady Love Dies, someone who is neither truly good or bad, but rather an avatar of justice and truth. 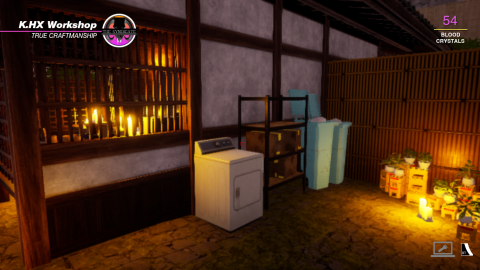 Lady Love Dies is a great protagonist because there’s a lot about her that’s sympathetic. She has an ex, a tragic past that nobody has forgotten, and you can play her as a skeptic who isn’t wild about this system she’s gotten herself stuck in. At the same time, she is apart of this corrupt system, and there are characters who will outright bring this up, and she doesn’t disagree. The way the game gives her motivation is by making her obsessed with solving crimes and revealing the truth, and then it wants you to question just how much effect she’s actually having in the grand scheme of things, if any at all. However, it also wants you to find value in what you accomplish, framing the court scene as you making your truth reality.

It’s a game drenched in existentialist and nihilistic thoughts as all these characters you meet ruminate over how small they are in the greater cosmos, and trying to figure out what their meaning is in the here and now. People have regrets, while past tragedies have scarred them in ways that may never heal. It is fact that the gods are real and are all kind of huge dicks who demand humans be treated like slaves and livestock. The 24th island is a beautiful place doomed to complete destruction, its ruins not even left around out of fear of demonic corruption. It’s not so much a game taking place at the end of history, but recognizing history will probably never end and whatever meaning we can find in it may not be “real.” This is the one absolute thing the game seems to side with Lady Loves Dies with 100%, asserting meaning and truth where it doesn’t seem to make sense. 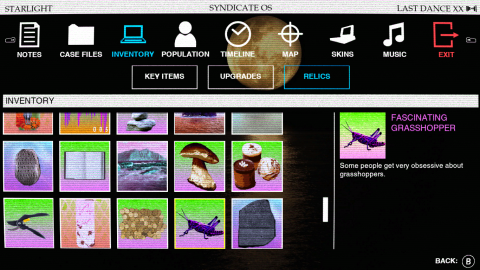 The music also bops very hard. Barry “Epoch” Topping, an indie game composer, handled the score and nailed it with a variety of nice pieces. It’s sort of like a solid mixture of vaporwave, chillwave, and authentic bits of jazz, funk, and easy listening. It all blends well and can be unlocked from radio towers on the map, there to play as you wish and to play over the game as you explore. It fits the island aesthetic very well in particular, mixing it with the empty urban, pastel look for some great back tracks. 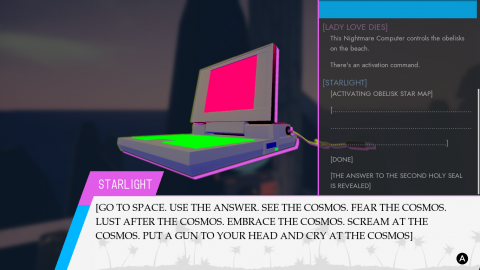 Paradise Killer is a ridiculous game in all the most fun of ways, but also has a wistful soul to it that makes it something very special. It doesn’t do anything revolutionary in its mechanics or base design, but the presentation and the meaning it creates and explores makes it a delight to dig into. It helps it doesn’t have the same sort of issues that Grasshopper games tend to have with buggy systems or awkward design, as everything works as it’s supposed to and never distracts from the core experience. It’s slick, entertaining, and absorbing. Don’t sleep on it, it’s a…killer.