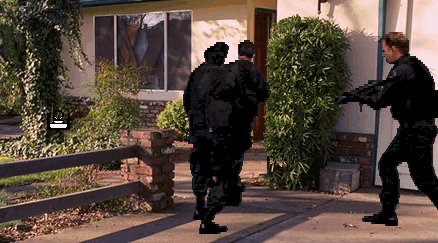 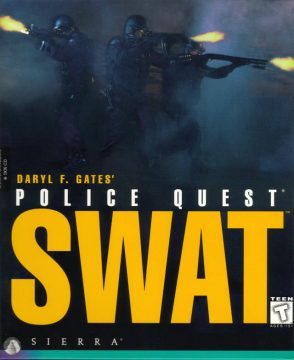 Police Quest: SWAT might actually be one of the worst video games ever made. Like Phantasmagoria and The Beast Within, it uses copious full motion video with digitized actors, but instead of keeping in the adventure game elements, it’s turned into some kind of sub-game, with only the barest minimal interactions. Daryl Gates, once again championed on the cover, is credited as the father of the Special Weapons Assault Team, hence the change in direction. 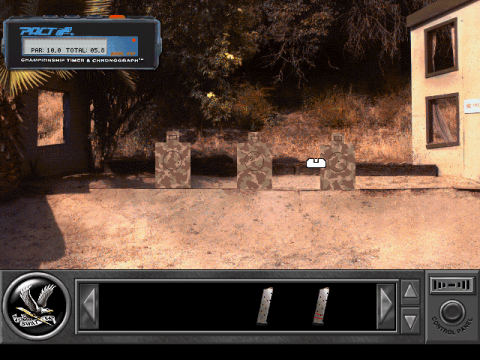 On the first of four CDs, you begin the game as a rookie in the SWAT squadron. Your first goal is to complete firearms training. You accomplish this by going to the firing range, taking out a gun, clicking on a target, and then repeat this for maybe thirty minutes or so. It’s hard to say exactly how long you’re supposed to do this – it just seems to go on forever until your commander lets you leave. Then you go to another firing range and do approximately the same thing, except against moving targets. Finally, if you elect to become a sniper, there’s another set of training you have to go through, although this is thankfully optional, because it’s much more confusing. Instead of just pointing and clicking, you need to fiddle with your gun’s sights to make it work, sort of like a similar thing back in Police Quest 2, but more annoying. Also, make sure not to skip any of the videos of your commanders talking to you, because they’ll yell at you if you do! 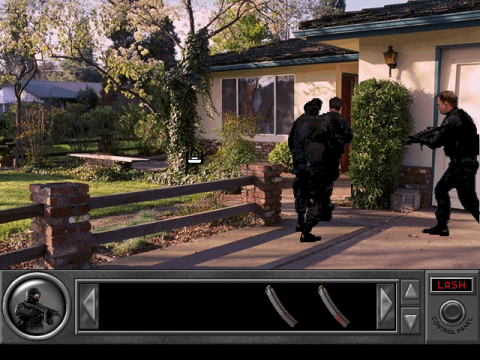 Once you’re done with that bit of drudgery, you can start the game proper. There are three different hostage scenarios, one each on the remaining three discs. There’s one with a deranged gun-wielding grandmother in a suburban neighborhood, one in a warehouse and one in an office building. Ironically, the training segments have absolutely nothing to do with the actual meat of the game. Neither do any of the video interviews with various officers regarding SWAT tactics. All you do is watch videos take place, and, at certain moments, make decisions by clicking on various parts of the screen. Click on the wrong place, or too early, or too late, and you’ll either get kicked off the team or killed. It’s roughly the equivalent to a slower paced Dragon’s Lair-style FMV game. To be fair, you can be assigned different parts of the team (you can only be a sniper in one of them, if you’ve completed the training), and since these are randomized, they won’t necessarily play out the same way every time. 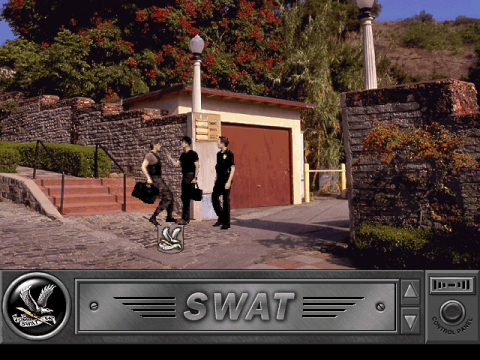 The acting is on the level of a bad police television drama. Your commander tries to be a hardass, and your teammates will try acting friendly with you in order to give them some kind of personality. They’re paper thin, though, and the game is not at all about story or characters or action or much of anything, really. It’s mostly about watching videos of dudes in full combat gear with guns slowly walking forward, and every once in awhile, hitting a button and hope you don’t get shot. In other words, it’s a monumental waste of time.

The Rest of the SWAT Series

In the absolute loosest definition, you could almost quantify Police Quest: SWAT as an adventure game, albeit one that focused entirely on the timed action scenes that so many genre fans hate. And at least it looks somewhat similar to other Sierra FMV titles and uses a similar interface. Sierra tossed all of that to the wind as its expanded its SWAT series in completely different directions. 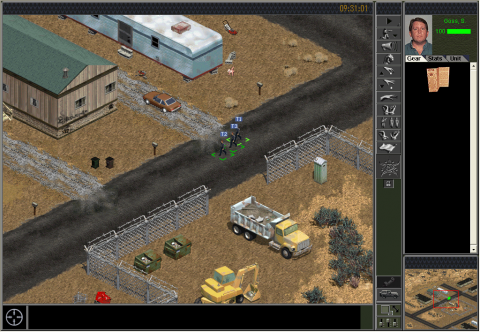 Police Quest: SWAT 2 is a real time strategy game. You can choose to play as the SWAT, or as a member of a terrorist organization, a move which probably would have never been seen in a post-9/11 world. With a 2D overhead isometric viewpoint vaguely reminiscent of Bullfrog’s Syndicate, you control your squad to fulfill various mission objectives. For the SWAT, it’s usually to quell hostage situations. For the terrorists, it’s usually to cause havoc. Conceptually, there’s some cool stuff – as the SWAT, you can use bullhorns to issue demands, toss in telephones to try to talk opponents down, or call in helicopters and tanks to take care of the more brutal situations. But the action is choppy, and the messy interface is hard to deal with, often resulting in your characters getting creamed before they can even act. It’s still fun planning missions though, especially since some are based on real-life situations. It’s also amusing to flip through the profile pictures of the dozens of members you can choose. The terrorists look like drug-addled whack jobs straight out of a trailer park, while the SWAT are all clean cut dudes (and one or two women). Sonny Bonds is also one of the members you can choose, the only true link to the earlier Police Quest games beyond the title.

From the third game onward, the series dropped the Police Quest name entirely and morphed into a tactical first person shooter, similar to Ubisoft’s Rainbow Six 3. While the first SWAT was reviled and the second met with middling reviews, the gaming public responded well to these sequels, so Sierra continued in this direction. SWAT 3: Close Quarters Battle was designed by Sierra and helmed by Tammy Dargan, the scripter of the later adventure games. Although it’s missing Sonny, his wife Marie shows up as a hostage in a few missions. Further releases include SWAT 3: Elite Edition and SWAT 3: Tactical Game of the Year Edition, each of which adds extra scenarios and features. These additions were also released for free on the Sierra website. 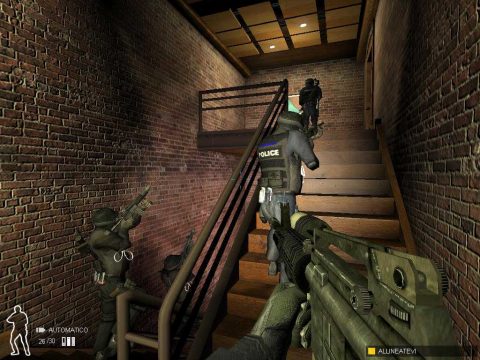 SWAT 4 was developed by Irrational Games, who later went on to create Bioshock, and uses the Unreal 2.0 engine. In a nod to its lineage, the tutorial instructor is named Sonny Bonds. An expansion was released called The Stetchkov Syndicate, and can be found bundled together in the SWAT 4: Gold Edition release. SWAT: Global Strike Team was developed for consoles by Argonaut Software, and released for the PlayStation 2 and Xbox. Although a completely new game, it is a tactical first person shooter similar to the third and fourth SWAT games. SWAT: Target Liberty was developed for the PlayStation Portable by 3G Studios and returns to the overhead isometric perspective of SWAT 2, although it’s focused less on strategy and more on action. SWAT Force and SWAT Elite Troops were also released for mobile phones.

The first compilation was released on CD in 1995 and includes the first four games on the series, including the AGI and SCI versions of the first game. It’s dubbed the Daryl F. Gates’ Police Quest Collection, even though he only worked on one of them. Successive releases include the Police Quest Collection Series in 1997, which added the first SWAT game to the roster in addition to the adventure games, and Police Quest: SWAT Generation only includes the first three SWAT games. In 2006, Vivendi released the Police Quest Collection, which includes the original four Police Quest games, although it’s missing the AGI version of the original. Like the King’s Quest, Space Quest and Leisure Suit Larry collections issued at the same time, it purports to update the games to run on modern systems, but it really just configures the games to run through DOSBox. Good Old Games also offers the first four games bundled together (as well as another bundle with the first two SWAT titles), and like the other compilations, is missing the AGI version of the first game.