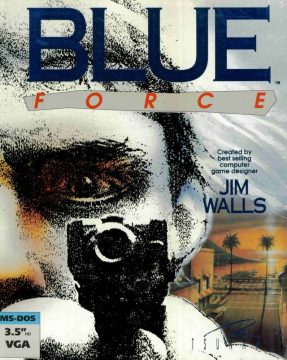 It’s never been officially documented how or why Jim Walls left Sierra, but someone apparently decided that his services were wanted elsewhere. And so, he went to Tsunami Media, the folks behind the Ringworld adventure games, to helm Blue Force, which may as well be an alternate version of Police Quest 4. It certainly feels like it, and it’s much closer to the spirit of the earlier games than the one Daryl F. Gates did. 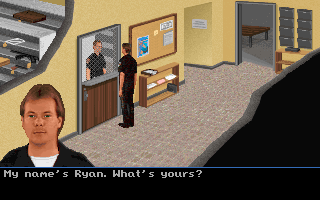 The setting this time is the small city of Jackson Beach, and the hero is Jake Ryan, a rookie on the police force. It’s his first day on the job, but naturally he gets swept up into dangerous situations mere minutes into putting on his uniform, including defusing hostage situations and hunting down gun runners. Like the early Police Quest games, there’s a bunch of random police work to be done, all of which include gathering evidence, booking suspects, and remembering the radio codes to report incidents or call for backup. It should all seem extremely familiar, although it’s odd that you never have to lock up your gun in a locker outside of the jail, something which the first three Police Quest games pummeled into you. There are no driving sequences, either, as you simply point-and-click on a map. The only major difference is that you ride around on a motorcycle rather than a squad car, which doesn’t affect much. 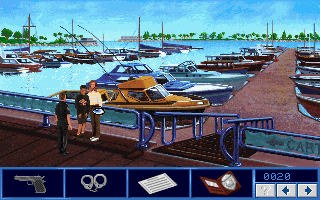 The overarching plot involves the hunt for the murderer of Ryan’s parents, an unsolved mystery for eleven years that naturally the newbie cop manages to solve in a couple of days. In the meantime, he also mingles with a single mother and her son, the victims of a domestic abuse case from early in the game. It’s all sorta cheesy, again, but it’s likable. It’s a quaint contrast to Open Season too – in that game, bad guys would repeatedly drop f-bombs, whereas in Blue Force their curses are censored, cartoon-style. 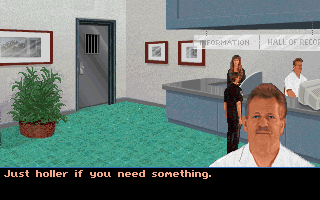 Jim Walls himself makes a cameo appearance in Blue Force.

Blue Force makes copious use of digitized actors, which is strangely handled far better than it was in Open Season. The backgrounds are still hand drawn, and the actors aren’t nearly as pixellated. The animated looping portraits during dialogue look a little bit silly, but overall it still looks fairly cohesive. Mr. Walls himself even guest stars as a worker for the city records department. The game was released on both disk and CD-ROM, but the CD version does not contain any voice acting, and is almost identical to the disk release, other than an audio interview with Walls. All actions are selected on a command menu, which looks like a police badge and is brought up with the right mouse button. Little has changed since the Sierra days, although the Speed adjust function is sorely missed. 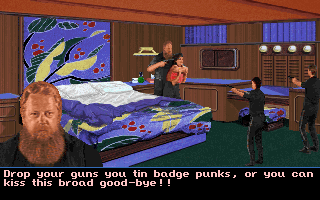 Blue Force was widely criticized at the time of its release – Wall’s storytelling clearly hadn’t improved much since the early days of Police Quest. The magazine Computer Gaming World once voted it one of the worst games of all time, noting that the writing was on par with the worst episode of the TV show CHiPs. That comparison isn’t too far off base, but it’s not really a bad game, just a dated one, even back when it was released. It’s a must for Police Quest fans, although most others will find its charms elusive.